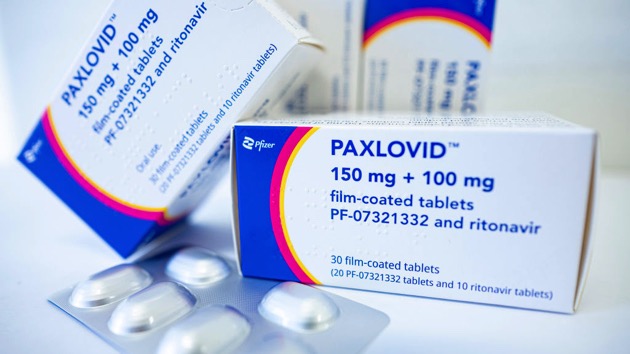 (NEW YORK) — Pfizer announced Wednesday it is launching a clinical trial to study the effectiveness of its COVID-19 antiviral pill in young children.

The treatment, Paxlovid, was authorized in December 2020 by the U.S. Food and Drug Administration for emergency use in patients aged 12 and older who have mild-to-moderate symptoms and are at increased risk of severe illness.

The new trial is planning to enroll 140 children between ages 6 and 17 who will be split into two groups.

One group will weigh between 44 and 88 pounds and the other groups will weigh more than 88 pounds.

“Since the beginning of the pandemic, more than 11 million children under the age of 18 in the United States alone have tested positive for COVID-19, representing nearly 18% of reported cases and leading to more than 100,000 hospital admissions,” Mikael Dolsten, chief scientific officer and president of worldwide research, development and medical at Pfizer, said in a company statement.

“There is a significant unmet need for outpatient treatments that can be taken by children and adolescents to help prevent progression to severe illness, including hospitalization or death,” Dolsten said.

Children under age 6 will not be included in this study, but Pfizer said research is ongoing to determine the best dose for the youngest of children

Pfizer’s pill was hailed as a game-changer because it was the first COVID treatment that did not require an infusion, making it more convenient to give to patients.

The pill is made up of two medications: ritonavir, commonly used to treat HIV and AIDS, and nirmatrelvir, an antiviral that Pfizer developed to boost the strength of the first drug.

Together, they prevent an enzyme the virus uses to make copies of itself inside human cells and spread throughout the body.

Paxlovid is currently given as three pills twice daily over the course of five days.

Clinical trial data showed the pill reduced the risk of hospitalization and death for COVID patients by 89% within three days of the onset of symptoms compared to a placebo.

According to clinicaltrials.gov, the pediatric trial has three locations including Mississippi, South Carolina and Texas.

Monkeypox and your skin: How to prevent and treat post-infection scarring