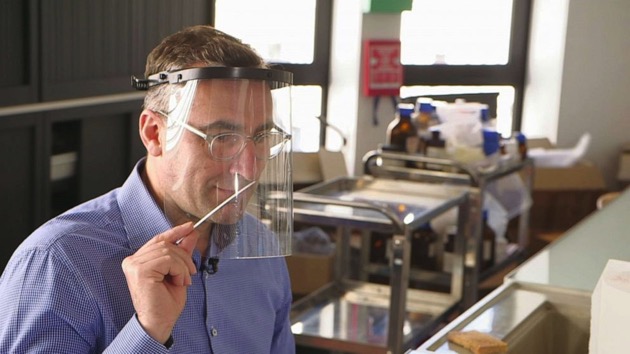 (PARIS) — It might be one of the most peculiar symptoms of mild COVID-19 infection: the loss of taste or smell, or both, that persists long after the virus has passed.

The phenomenon has prompted some former COVID-19 patients to make light of their situation on social media through videos where they munch into everything from raw onions to wasabi Oreos. However, the phenomenon is no joke for those who’ve now been deprived of these senses for up to a year.

“It’s annoying. Life is very boring,” said Laurent Brossard, of Paris, who lost his sense of smell over five months ago when he contracted COVID-19.

“I miss smelling my children, my husband’s cologne. I miss the smell of nature,” said Corinne Prudhomme, a doctor who caught COVID-19 during France’s first wave last year and has been dealing with the loss of smell, also known as anosmia, ever since.

Prudhomme says it’s also been frustrating being unable to determine how she herself smells, and that the anosmia has also affected the way she eats.

“I use a lot more salt, and I eat more than I used to. I can’t taste anything, so I just eat more,” she said.

While the data is limited, a study of about 200 COVID-19 patients last year found that nearly half reported a loss of taste or smell. While most of them regained their senses within four weeks, roughly 10% reported their condition had been unchanged or worse.

Doctors are still learning about COVID-19-related anosmia and possible treatments, and some have begun studying the benefits of steroids and olfactory implants.

For now, however, Dr. Hakim Benkhatar, an ear, nose and throat specialist at the Centre Hospitalier de Versaille, says olfactory training is most likely to treat anosmia related to COVID-19. It involves patients picking out a few scents and setting time aside at least twice a day to practice smelling them in hopes that it will reawaken their senses.

It was at Paris’ Institut Superieur du Parfum where Brossard began his olfactory training. The institution was built on the idea that scent can be learned, and it’s where the country’s future “noses” learn to hone their senses.

The school had previously developed its own kind of olfactory rehabilitation, known as the Olfactory Stimulation Therapy and Memory Reconstruction (OSTMR) method, which is now being used to help COVID-19 long-haulers experiencing anosmia.

The technique, fine-tuned by neuropsychiatrist and biochemist Olga Alexandre, draws on neurology, psychology, emotional intelligence and the personal history of each patient, she says.

“It’s like breaking your arm,” explained perfumer and OSTMR therapist Justine Legay. “You might need to go to physical therapy and work on it, but you’ll eventually be able to move it again. We do the same thing. Training your sense of smell means you can regain it.”

The training is crucial because losing one of the senses can lead to other health issues, Benkhatar says.

“Olfactory loss is something really distressful for patients because it impacts their daily life in many activities, such as cooking, and usually they have a loss of appetite,” Benkhatar said. “And they have more anxiety and depression because of the consequences on their social interactions.

“Finally, and most importantly, they lose their ability to detect hazards,” he added, pointing to potential hazards like gas leaks or smoke, which he says anosmic patients would likely fail to notice.

Brossard has been training with Legay once a week to recover his sense of smell.

“I exercise every day, every morning, every night,” said Brossard. “Five in the morning, five at night.”

“The sense of smell is something we really need,” said Legay. “We’re starting to realize it because of COVID. But up until now, we took it for granted.”

For the training, Legay prepares a personalized scent with special meaning to each patient. During a recent session with Brossard, she prepared the smell of orange juice, which Brossard said he used to enjoy every morning with his family.

Brossard closed his eyes as he leaned toward the swab with the orange scent on it. He inhaled deeply through his nose and subsequently tried to guess which scent Legay had offered him. At first, he suggested it could be something floral. But he quickly caught his error and identified a fruity scent, before narrowing it down to something citrusy.

When Legay asked him if he was able to recognize the orange scent, his face lit up.

For the first time in months, finally, Brossard caught a whiff of orange. Brossard says the training gives him hope that he’ll soon be able to recognize other scents.

He said, “I don’t imagine having anosmia forever.”