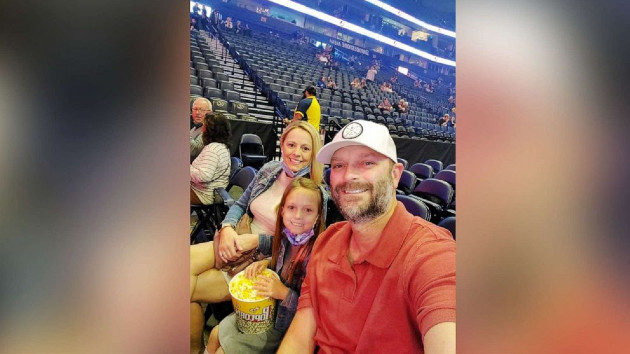 (NEW YORK) — A Tennessee family is speaking out to share memories of their 7-year-old daughter, who died Feb. 7, less than 72 hours after testing positive for COVID-19.

“She was just a happy, healthy, normal, beautiful soul,” Jennifer Graviss said of her daughter, Adalyn. “She was just so sweet, an amazing kid.”

Jennifer Graviss and her husband Adam Graviss, of Knoxville, Tennessee, said Adalyn, whom they described as an active and healthy child, had been feeling fine until early in the morning of Feb. 4, when she complained of feeling hot.

When they took her temperature and saw it was 102 degrees, they said they gave her an at-home COVID-19 test, on which she tested positive.

Adalyn, a second-grade student, stayed home from school that day and appeared to be feeling fine, according to her parents. It was not until the following night, they said, that she started struggling to walk and speak.

“It was right around the nine o’clock hour when we noticed her speech was all but gone, though she was still responding to us,” said Adam Graviss. “By 10 o’clock, I was in the emergency room [with her], and she was unresponsive at that point.”

“It was just so fast,” he continued. “Hours before going to the hospital, she was running in the front yard.”

Adalyn was quickly transported to Monroe Carell Jr. Children’s Hospital at Vanderbilt in Nashville, where she was put on an ECMO machine, a lifesaving device that pumps and oxygenates a patient’s blood outside the body.

“Even while it was happening, it didn’t seem real,” Adam Graviss said of his daughter’s rapid decline. “Her levels were improving and then she just took a turn for the worse.”

In addition to a severe case of COVID-19, doctors diagnosed Adalyn with both severe myocarditis, inflammation of the heart, and acute disseminated encephalomyelitis (ADEM), inflammation of the brain and spinal cord that can quickly cause neurological damage, according to the National Institutes of Health (NIH).

ADEM attacks the body quickly and often follows a viral or bacterial infection, according to the NIH.

Amid the surge of the omicron variant in the U.S., infectious disease experts noticed a pattern of brain inflammation, or encephalomyelitis, following cases of COVID-19, particularly among children, according to Dr. Isaac Thomsen, a pediatric infectious disease expert who helped care for Adalyn at Monroe Carell Jr. Children’s Hospital at Vanderbilt.

Thomsen said Adalyn’s case of ADEM was one of the most rapid and severe cases he has seen in his career. He said she was also the first pediatric patient he has treated who presented with both COVID-related ADEM and severe myocarditis at the same time.

“The combination is probably what ultimately cost her her life, “Thomsen said. “That is pretty rare among viruses, this ability of COVID to hit both of those [the heart and the brain] at the same time.”

Adalyn was not yet vaccinated against COVID-19. At age 7, she had just become eligible for the vaccine in November and her parents said they were still considering it. The Gravisses said Adalyn was diligent about following COVID-19 safety protocols, including wearing a face mask at school and washing her hands.

Jennifer Graviss gave birth to the couple’s second child, a baby named Ella, on Jan. 28, and she said the whole family quarantined at home outside of Adalyn going to school in the time before and after the baby’s birth.

“We were just very cautious,” said Jennifer Graviss, adding that Adalyn was particularly cognizant. “If a kid was coughing she would ask to be moved because she didn’t want baby Ella to get it.”

Adalyn also had no known underlying health issues that would cause or predict such severe illness, according to her parents as well as Thomsen.

“This is a big reason of why we don’t roll the dice on a virus like this,” Thomsen said of COVID-19’s unpredictably when it comes to who it affects and how severely. “This is not something to mess around with.”

“The takeaway for parents is this is a virus that we have got to take very seriously and one we have a safe and effective vaccine for,” he said.

The Gravisses said they are still shocked that they are now planning funeral arrangements for their beloved daughter, who became a big sister to Ella just one week before her death.

“She waited for years to be a big sister,” said Jennifer Graviss. “Every night she would pray for God to give her a baby to be a big sister, and that’s what we’re so thankful for, that she was able to experience that for five days.”

Jennifer Graviss said that Adalyn treated Ella like her own baby doll, dressing her up and waking up an extra 30 minutes before school every day so that she could have more time to hold her.

“She would just sing to her and she would sit there and tell her stories like, ‘I’m going to be your best friend. Sissy’s going to show you so much, how to dance and how to play basketball and as soon as you’re big enough, we’re going to church,"” she said of Adalyn. “She just wanted to be with the baby all the time.”

Adam Graviss said he is comforted knowing Ella will have her big sister as her protector, saying, “She’s going to have the coolest guardian angel looking over her, protecting her.”

The Gravisses said their daughter loved things like playing basketball and dancing, going to church and being around her friends. The family held a celebration of life for Adalyn last week for her school friends, basketball teammates and fellow Girl Scouts and dance classmates.

“All her friends are wearing shirts that say, ‘Love Like Adalyn,"” Jennifer Graviss said. “She just had the biggest heart. She loved her friends. She hugged teachers that weren’t even her teacher every morning. She would stop by the [school] office and give an update every day about baby Ella.”

One of Adalyn’s former teachers started a GoFundMe for the family to help cover Adalyn’s medical and funeral expenses.

Jennifer Graviss and her husband said they are now finding comfort in seeing how vibrant a life Adalyn led and in knowing they have “no regrets” because of the time and attention they gave their daughter.

“We did everything with her, everything she wanted to do, from going to Disney World to playing basketball in the driveway in the dark to playing UNOs tournaments every night,” Jennifer Graviss said. “She was just a happy girl.”

Jennifer Graviss noted that while Adalyn loved everyone, she had a special fondness for her dad.

“She did everything with [her] daddy,” she said, adding that Adalyn encouraged her dad to watch YouTube videos to improve at putting her hair in a bun for dance class. “Every basketball game that she’d make a shot, she’d look back for daddy to be cheering her on. They were best buds.”

“We just never wanted to be without her,” Adam Graviss said. “We would have people all the time asking to babysit her and let us go out for a date night, but we never did. We just wanted to be with her.”

He continued, “She was just really fun, and we just took her everywhere. That’s what makes it so hard. She was our best friend.”