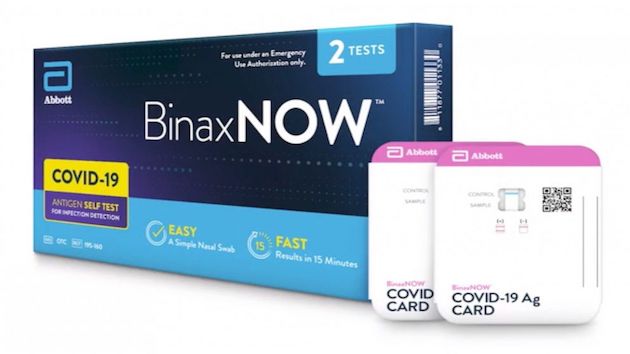 (NEW YORK) — Store shelves at pharmacies across the county will soon be filled with affordable, quick, at-home coronavirus test kits.

BinaxNOW, a rapid COVID test made by Abbott Laboratories, was shipped Monday to major pharmaceutical chains, including Walgreens, CVS and Walmart, to be sold over the counter. The tests will be sold in two-count packs for $23.99.

The Food and Drug Administration gave an Emergency Use Authorization for BinaxNOW at the end of March. The test can be used on children as young as 2 when samples are collected by an adult and for all people 15 or older.

Users can take the test even if they don’t show symptoms and get results within 15 minutes, according to Abbott.

The company says it will manufacture tens of millions of BinaxNOW Self Tests per month and can further scale capacity based on demand.

Abbott said they will work with retailers to prioritize distribution to areas of the country where the virus is surging as additional supply comes online.

“Over the past year, Abbott has developed high-quality rapid testing and invested in U.S. facilities to scale up manufacturing so we could bring affordable testing to Americans on a mass scale,” Robert B. Ford, the president and CEO of Abbott said in a statement.

A spokesperson from Abbott told ABC News the company can produce tens of millions of kits a month. There are other over-the-counter rapid antigen tests available, like one from Ellume, out in the market.

Dr. Michael Mina, an assistant professor of epidemiology at Harvard T.H. Chan School of Public Health, said there will likely be a large demand for over-the-counter tests.

“At the moment, however, at 50 million per month split across over the counter and bulk sales to schools, businesses and other congregate settings, it is unclear what the availability of these tests will be over the coming weeks and months,” Mina told ABC News.

He commended Abbott for indicating they will increase their supply based on the market demands.

“It is a major advance over what has been available,” Mina said of BinaxNOW.