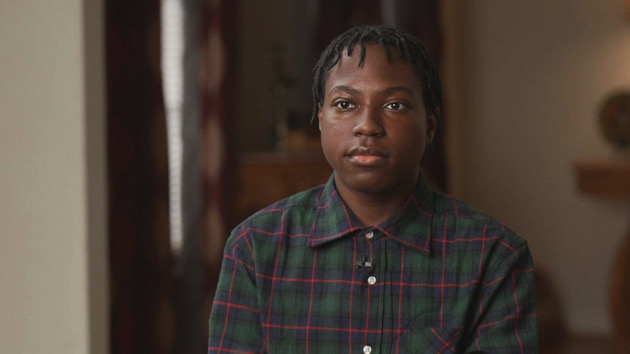 (NEW YORK) — Justice Brooks is 19 years old and a majority of his lifetime has been spent searching for a bone marrow donor.

“I always knew that I had a medical condition and that … my life was a little bit different,” Brooks told Good Morning America.

Brooks was diagnosed with sickle cell disease when he was 11 months old. His mother Raychelle Brooks said she knew early on that something was not right.

“My child was so swollen, his face was glassy, and when I touched him, he moaned,” said Raychelle Brooks. “I was crying because my touch would make him cry louder.”

According to the Centers for Disease Control and Prevention, sickle cell disease is made up of a group of inherited red blood cell disorders, when abnormal protein in the blood causes red blood cells to become hard, sticky and like a C-shaped farm tool called a “sickle.” As a result, the blood cells will get stuck and clog blood flow, causing severe pain.

Dr. Michelle Schoettler is a pediatric hematologist at Children’s Healthcare of Atlanta and treats patients with the disease. She said many of her patients report pain outside of the widely-used 1 to 10 pain scale.

“Many of my patients would say they have pain at 11 – beyond the scale,” said Schoettler.
To help continue to raise awareness of the bone marrow registry, GMA is partnering with Be The Match in our “One Match, Second Chance” series from September 20 through February 20 to continue to raise awareness and to help save lives. Learn how to take the first step to sign up to become a donor today.

Raychelle Brooks is the mother of Justice Brooks.

Brooks nearly came close to having a life-saving bone marrow transplant last summer, but because his donor wasn’t a perfect match, there was a complication that stopped the process.

“While I was going through the process, I caught a lung infection and they had to stop it immediately,” said Brooks.

After years of waiting, Raychelle Brooks said that moment felt like when the “Earth stopped moving.”

“I normally am very strong for my baby, but I couldn’t even look at him. It took everything out of me. It was hard to breathe,” said Raychelle Brooks. “I’ve never felt so hopeless in life. But I was so happy he pulled through.”

Sickle cell disease is most common among those of African American descent, occurring among about 1 out of every 365 Black or African-American births, according to the CDC.

Only 7% of the 9 million U.S. donors in the match registry are African American, according to Be The Match.

“If you are a Caucasian – from European descent, you have an 80+ percent chance of finding an excellent match in the registry. And if you are Black or African American like Justice, your chances are much lower – 30 percent,” said Schoettler.

As Brooks gets older, his chances in finding a successful bone marrow transplant decreases even further.

But there is still hope. This fall, NBA Celtics star Marcus Smart became an advocate for “Be The Match,” to help spread the word of people like Brooks.

Smart said the cause “hits home” because he lost his oldest brother and mother to cancer.

“So for me to be able to join and educate people and get that notice out there, that we need this to increase when it comes to getting matches,” said Smart.

Brooks and Smart were able to meet up and discuss ways to further raise awareness for the registry.

“It’s just really great to see the work that he’s doing and continuing to stay positive with everything he’s going through in life,” said Smart. “To this day we still check up on each other.”

Brooks said he’s grateful for how far he’s come, but continues to look at the future.

“I’ve just made a bunch of memories. I’ll never forget these things, so I really appreciate Marcus,” he said. “I feel hopeful that one day I’ll have that perfect match.”