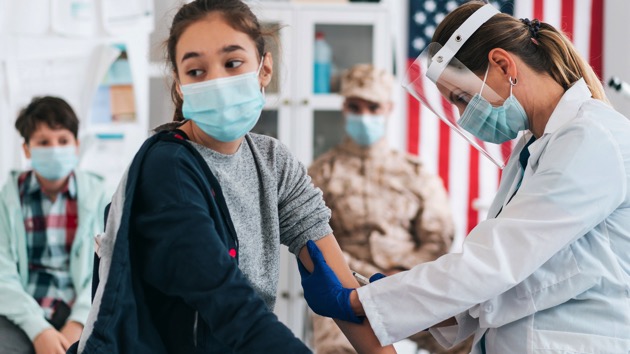 (NEW YORK) — New York teens who are 16 and older in juvenile detention centers, homeless shelters, and foster care facilities are now eligible for the COVID-19 vaccine.

The state’s Office of Children and Family Services issued a letter on Monday to its facilities and programs “to provide for residents age 16 and over access to schedule COVID-19 vaccination appointments,” following prodding by local lawmakers and advocates.

The guidance will impact 636 eligible children in Administration for Children’s Services facilities and 637 in Department of Youth and Community Development facilities in New York City, officials told ABC News.

Pfizer’s shot can be taken by those 16-years-old and older and the Moderna vaccine by adults 18-years-old and up, according to state and FDA guidance.

However, there may be future hurdles to getting these kids vaccinated.

Under state guidelines all residents in congregate settings require the consent of the individual’s parent or legal guardian if they’re under the age of 18, which may be a challenge for those without such relationships.

On Feb. 15, the New York State Department of Health issued guidance stating that under vaccination phase 1B, residents of congregate settings run by the OCFS could get a shot — but didn’t clearly state teens were included.

The Legal Aid Society, the city’s largest public defender organization which advocates for runaway and homeless youth in the city, called on the OCFS to include teens in the rollout, citing that Black and Hispanic children and teens comprise the majority of youth held in OCFS facilities. Those same populations have been disproportionately affected in the pandemic.

“We welcome this news that our young clients in congregate settings will now have access to the COVID-19 vaccine,” the Legal Aid Society told ABC News.

State Sen. Brad Hoylman also sent a letter to the OCFS regarding the gap in vaccine eligibility, urging them to clarify that teens would be included.

The New York Coalition for Homeless Youth praised the inclusion, stating, “Too often runaway and homeless youth in New York state are an afterthought when it comes to resource allocation. Homeless youth are homeless, and they should never have been excluded from eligibility for the COVID vaccine.”

ACS, which oversees the NYC foster care and juvenile justice systems, described the move as a “game-changer.”

“We have been advocating for eligibility to be expanded to youth in our congregate facilities, and we’re pleased that the state has heeded this request,” spokesperson Marisa Kaufman told ABC News, adding the agency is working with health officials to make sure vaccines are distributed.

It’s not clear if there will be Runaway and Homeless Youth-specific vaccination sites or if RHY program sites will be used to administer vaccines.