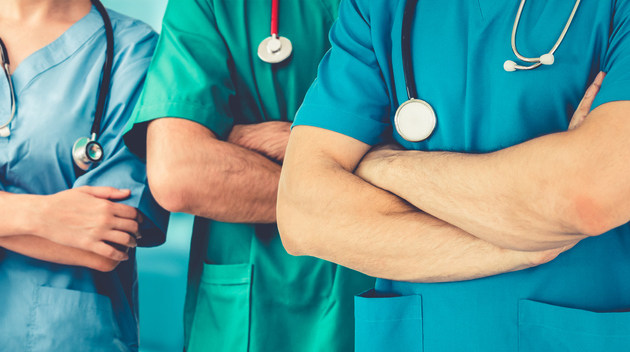 (LAS VEGAS) — For some patients, it’s the little things.

Brooke Johns, 40, is an emergency room nurse at Southern Hills Hospital in Las Vegas. On her days off, she heads back to the hospital to provide patients with some genuine human connection, brushing out their hair and just talking with them.

Johns started these acts of kindness earlier this year, when a friend of hers was in the hospital with COVID-19, she said. The hospital didn’t allow patients with the virus to have any visitors, so all of their human contact came from staff.

“Her hair was very matted in the back,” Johns said of her friend. “She was so weak, and wasn’t able to brush it out herself, so I just said, ‘Do you want me to brush your hair?"”

As patients are usually laying on their backs in their hospital beds, Johns said their movements can easily snarl their hair.

“It took me an hour and a half to brush out her hair,” she said. “Then I asked her, ‘Do you want me to braid it so that it doesn’t get like that again?’ And she said, ‘Yes."”

Afterward, Johns said she noticed a change in her friend’s demeanor.

“She was a different person when I left,” Johns said. “The thought just popped into my head that if my friend benefitted so much from this, I bet there’s a hospital full of people that need some sort of human connection.

“We’re all hard-wired for connection. We’re social beings and we need that.”

Sierra Stein, 24, knows all too well how important it is to have genuine connections and distractions in the hospital. She said she contracted COVID-19 last summer and became paralyzed in her legs, which required her to stay in the hospital for a few months as she received treatment.

“It was miserable because you couldn’t have anyone there,” Stein said. “You’re isolated, you’re lonely. It’s a really dark place.”

Stein was later released and regained the ability to walk, but more pain in her legs again required an emergency room visit in July 2021, she said.

Based on her previous experiences, she tried to avoid a longer hospital stay but her attending nurse, Johns, sat with her for over 10 minutes, soothed her worries and convinced her to go.

While Stein was receiving treatment, she said staff mentioned that there was a nurse going around and braiding patients’ hair.

“They were like, ‘Do you want to get your hair braided?’ and I said, ‘Oh yeah, of course,"” Stein said. “That’s when I saw Brooke again.”

According to Johns, ER nurses see a high volume of people and and often don’t know what happens after they leave the ER.

To find patients, Johns goes to her director and sends out a broadcast to staff asking if they have any patients who want to get their hair braided. Johns’ colleagues then text her with patients’ room numbers, and she goes to them one by one.

The human contact from a person who cared made a world of difference to Stein.

“It’s such a nice distraction from your illness,” Stein said. “When you’re in the hospital your mental health kind of gets shut down.”

She continued, “It’s really just amazing that there are fairy godmothers going around in the hospital who actually care and take the time to sprinkle a little sunshine on you. … It makes you feel like you’re at home again.”

Beyond providing an important level of connection for patients, Johns said she does this because we don’t know what a person may be going through and wants to make people feel like they’re loved.

“Everybody has a story that will bring you to your knees,” Johns said. “Life is hard and that’s why I think it’s so important to be kind and patient and spend time with people.”

Alexis Mussi, Southern Hills’ CEO, told “GMA” that other nurses were inspired by Johns and are now giving back in a similar manner.

“This past year our care team became the spouse, the family member, the friend, the everything for our patients,” Mussi said. “When there isn’t someone here holding that hand at the bedside, it really became our team doing that, so having people like Brooke really helped.”