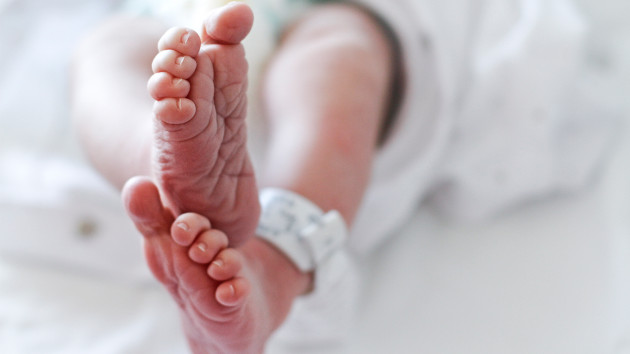 (NEW YORK) — In what could signal the promise of progress to come for newborn infants at risk for RSV, a new monoclonal antibody is being granted approval in Europe as a preventative measure to protect against RSV infection in very young babies — those most at risk of contracting the virus — during their first RSV season.

Developed jointly by Sanofi and AstraZeneca, commercially called “Beyfortus®,” this monoclonal antibody is given via a single dose intramuscular injection to infants aged 0 to 12 months, to protect against RSV before they get infected, from birth up through their first RSV (respiratory syncytial virus) season. The European Commission announced Friday morning it had approved the drug.

This does not mean it is an option for American babies, at least not yet. Sanofi and AstraZeneca will still have to go through the U.S. regulatory process for that — Food and Drug Administration approval, and recommendation by advisory panels like the Centers for Disease Control and Prevention’s Advisory Committee on Immunization Practices.

If and when the FDA does approve this antibody, it won’t be in time for this season’s surge. But it could get approved in time for next year.

Sanofi tells ABC News they and AstraZeneca have already submitted their clinical trial data to the FDA. They expect to finalize their submission to the FDA by the end of this year, with the hopes of it being approved and available by the fall/winter of 2023/2024.

“It’s really exciting news. We’ve been looking for solutions to be able to prevent RSV for close to 50 years,” Dr. Michael Greenberg, a pediatrician and vice president, Sanofi’s Medical Head of Vaccines for North America, told ABC News in an interview.

He noted that once available, it could offer an important “first tool that we have to be able to protect all babies going into their first RSV season.”

This monoclonal antibody, called Beyfortus, is a lab-made, synthetic version of RSV immunity that newborn babies don’t have time to develop on their own, with their short time on earth.

That could change once a maternal RSV vaccine is approved and available — but for now — it could offer an important stopgap of protection for a vulnerable population, especially looking ahead from amid the current influx of pediatric RSV infections currently surging in the U.S.

A sampling of national CDC data shows RSV cases recorded for all ages are occurring more than twice as high at this point this year compared to last year, with more than twice as many cases per week, and likely leading towards more severe cases, especially in pediatric emergency departments and pediatric hospitalizations, which have limited resources to begin with, according to Chief Innovation Officer at Boston Children’s Hospital and ABC News Contributor, Dr. John Brownstein.

Newborn infants are at the highest risk of RSV infection, especially those who are born prematurely or immune compromised. Their heads are big, their airways small, and they have no built-up immunity. It is a leading cause of hospitalization in infants in the U.S.

This monoclonal could be a notable measure of protection for babies, wherever it’s approved, available and accessible to those who need it.

“Speaking as a pediatrician as someone who’s worked in public health, we always try to prevent, rather than having to treat — which is why we use vaccines for example — it’s better to prevent illnesses than to treat it,” Greenberg said.

It is designed to keep RSV from being as serious as it can be in the population most vulnerable to severe infection — newborns.

So, while Beyfortus may not prevent all infections, like milder ones, it does buy important time for the most vulnerable tiny babies to grow larger and stronger and less likely to get hit as hard by RSV.

During the pandemic, many kids weren’t as exposed to many of the viruses they would have been otherwise, during the course of a normal childhood — because of masking, social distancing, remote learning, etc. during their very early years.

One theory to explain the unusually high number of RSV infections says that babies who would have been affected earlier on in life in a normal setting were instead born into the COVID bubble — which may have caused a delay in their built-up immunity, experts say.

Now, as the masks have come down, the infection rates are going up at even higher rates, and experts emphasize how COVID-19 has thrown the typical seasonality of our respiratory viral waves.

There is also no vaccine for RSV yet, while there is, of course, for COVID and the flu.

“The holy grail for durable RSV protection remains the illusive vaccine which now seems to be on the horizon,” Brownstein said. “Nonetheless the availability of these therapies will play an important role as a stop gap, likely an important tool to protect high risk babies from complications of RSV infection.”

There have been recent and promising developments with the data on Pfizer’s maternal RSV vaccine candidate — and while they can now move forward with the approval process, that vaccine won’t be immediately available to families worried about the current surge. FDA approval and CDC recommendation are possible next year.

And in the newborns most at risk for severe RSV, they have not lived long enough for a vaccine given directly to them to have enough time to build sufficient immunity.

Enter, alternatives like this monoclonal antibody: a synthetic version of that immunity which can help ward off infection.