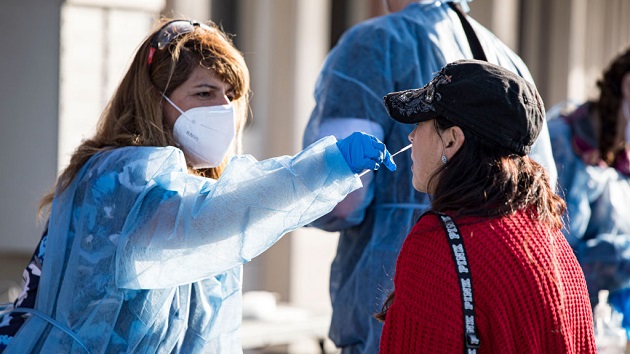 (NEW YORK) — A new COVID-19 variant has been identified in the United Kingdom, but experts say there is no cause for alarm yet.

The variant, known as XE, is a combination of the original BA.1 omicron variant and its subvariant BA.2. This type of combination is known as a “recombinant” variant.

Public health experts say that recombinant variants are very common and often crop up and disappear on their own.

“Right now, there’s really no public health concern,” said Dr. John Brownstein, an epidemiologist and chief innovation officer at Boston Children’s Hospital and an ABC News contributor. “Recombinant variants happen over and over. In fact, the reason that this is the XE variant recombinant is that we’ve had XA, XB, XC, XD already, and none of those have turned out to be any real concern.”

According to an update last week from the U.K. Health Security Agency, 637 cases of XE have been identified as of March 22, with the earliest detected Jan. 19.

An early indication from the U.K. suggests XE could be slightly more transmissible than BA.2, but the World Health Organization said more research is needed.

Meanwhile, XE makes up less than 1% of total COVID-19 cases that have undergone genomic sequencing in the U.K., and there is no evidence to suggest that the variant can escape vaccines, cause more severe disease or is more deadly.

“This particular recombinant, XE, has shown a variable growth rate, and we cannot yet confirm whether it has a true growth advantage,” Professor Susan Hopkins, chief medical adviser for UKHSA, said in a statement.

So far, no cases of the recombinant variant have been reported in any other country, including the United States.

Brownstein said there are still a lot of unanswered questions surrounding XE, but that — in the U.S. — there is a high level of protection both from vaccines and from natural immunity during the omicron wave.

“It’s possible it may be more transmissible, but that doesn’t necessarily mean it’s more severe,” he said. “And given the sheer number of infections we’ve already seen with omicron, it’s really unclear whether even being slightly more transmissible means we’ll see any impact of this variant whatsoever.”

Brownstein said one of the reasons the U.K. was able to pick up on the variant as quickly as it did is because of its robust surveillance system.

“The U.K. has done a phenomenal job of sequencing a large number of cases, doing analyses and producing the output of that work,” he said. “So you could see the identification of XE actually as a positive because it shows that our public health systems are working, identifying new variants even when the case numbers are super small.”

Brownstein added, “This shows that some of these variants can be needles in a haystack, and here we have an example of one being identified very early on.”

The World Health Organization released its own report saying it is monitoring XE, but there is no evidence yet that it is a variant of concern like alpha, delta and omicron.

“WHO will continue to closely monitor and assess the public health risk associated with recombinant variants” and will “provide updates as further evidence becomes available,” the organization said in a report published March 29.

Brownstein said variants will continue to emerge, but it is important for people to follow COVID-19 mitigation measures so they don’t get a chance to spread.

“Being vaccinated and boosted, as well as practicing good hygiene and following public health recommendations all help to drive transmission down in the community,” he said. “When we have uncontrolled spread, that’s when the virus is given chances to mutate.”

The UKHSA said it is also monitoring two other recombinant variants known as XD and XF, both of which are a combination of the delta variant and BA.1.