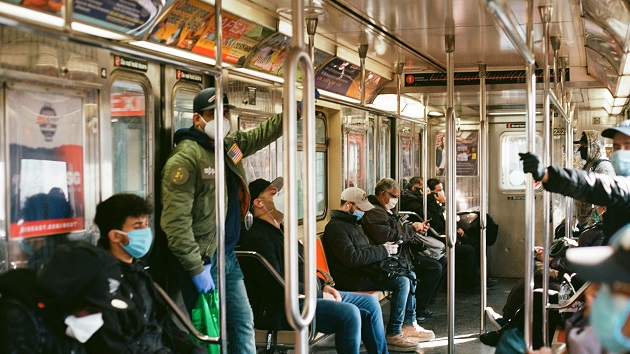 (NEW YORK) — Scientists are now studying a new “home-grown” COVID-19 variant that has been identified and is circulating in the New York City area.

The variant, which scientists are calling B.1.526, was identified separately by two research groups. Researchers at the California Institute of Technology and at Columbia University published their separate findings this week, ahead of a formal scientific peer review process.

While analyzing over 1,100 samples for mutations found in the South Africa and Brazil variants, Columbia researchers didn’t detect high numbers of those specific variants.

“Instead we found high numbers of this home-grown lineage,” Dr. Anne-Catrin Uhlemann, associate professor of medicine in Columbia University’s division of infectious diseases, said in a statement.

So far, Columbia researchers say they have identified at least 80 cases of the new variant across the tri-state area of New York, New Jersey and Connecticut, indicating the variant isn’t confined to a single outbreak.

Looking back through a database of COVID-19 genetic samples, researchers found traces of B.1.526 dating back to November. According to the CalTech study, this new variant accounted for approximately 25% of New York coronavirus genomes that were sequenced and deposited into the variant database in February.

Scientists say they’re seeing more cases of the variant now than they first did months ago, but it’s not clear yet if this variant is more transmissible.

Although it shares a mutation in common with the variants that originated in South Africa and Brazil, the B.1.526 variant is unique and will need to be studied further to understand its impact on transmissibility, lethality or the vaccine.

Researchers from Columbia said they are planning to step up their efforts to track this new variant by sequencing 100 samples per day.

“Increasing our genomic sequencing effort will help us better understand the impact of the new variant and keep our eyes open for new variants that may pop up in our area,” Uhlemann said.

Nationally, New York City has one of the highest case rates per 100,000 people over the last seven days, according to the COVID Tracking Project.