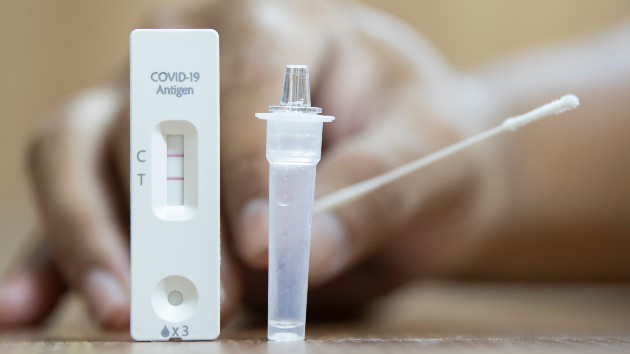 (NEW YORK) — Current COVID-19 cases are just a fraction of what they were at the peak of the omicron wave.

But many people in the country may be noticing what seems to be a flood of cases in their social circles.

Health experts say this anecdotal evidence may not be simply coincidence, as the U.S. may be in a “hidden” wave — one much larger than reported data would suggest.

“There’s a lot of COVID out there. I see it in my social circles, in my kids’ schools and in the hospital employee infection numbers,” Dr. Shira Doron, an infectious disease physician and hospital epidemiologist at Tufts Medical Center in Boston, told ABC News. “We are clearly in a wave.”

Although it is clear that infection rates have been steadily rising in recent weeks to their highest reported level since mid-February, scientists acknowledge that it is difficult to know how high COVID-19 case and even hospitalization numbers truly are, given the likely “substantially” undercounting of infections.

This is due in part to changes in data collection and reporting and the proliferation of at-home tests. Some state officials report that health departments and healthcare facilities have also ended traditional tracking of COVID-19 patients, which epidemiologists say make it more difficult to know how many patients are coming into hospitals in need of care.

Last month, former Food and Drug Administration Commissioner Dr. Scott Gottlieb estimated that officials were likely only picking up “one in seven or one in eight” infections.

And President Joe Biden’s new coronavirus response coordinator, Dr. Ashish Jha, acknowledged that there are “a lot of infections” last week, likely the result of highly infectious omicron subvariants spreading across the country.

“We know that the number of infections is actually substantially higher than that. It’s hard to know exactly how many but we know that a lot of people are getting diagnosed using home tests,” Jha explained.

The nation’s reported daily case average, which officials say consists largely of PCR tests, now stands at more than 100,000 new cases reported a day, according to data from the Centers for Disease Control and Prevention (CDC).

In recent weeks, nearly every state in the country has reported an increase in COVID-19 infections and the number of virus-positive people who are admitted to the hospital.

The Northeast remains the nation’s most notable known COVID-19 hotspot, though surges in some cities, like Boston, appear to be showing initial signs of slowing.

Nationally, according to the CDC’s community levels, more than 45% of Americans live in an area with a medium or high COVID-19 risk.

The high community level suggests there is a “high potential for healthcare system strain” and a “high level of severe disease,” and thus, the CDC recommends that people wear a mask in public indoor settings, including schools.

Hospitalization numbers have been increasing in recent weeks, but not at a rate as significant as infections.

However, over the course of the spring and winter, hospitalization data, too, has become less accessible, leading some experts to suggest patient totals could also be undercounted.

Earlier this year, the Department of Health and Human Services ended the requirement for hospitals to report several key COVID-19 metrics, including a daily total of the number of COVID-19 deaths, the number of emergency department overflow and ventilated patients and information on critical staffing shortages.

However, Doron said a possible significant surge in infections, without an overwhelming number of hospitalized COVID-19 patients, could be a promising sign.

“If cases are really a lot higher than what we are seeing, it means the ratio of hospitalizations to cases and deaths to cases is even lower than what we are seeing, and we are already seeing a ‘decoupling’ between cases and hospitalizations and deaths,” Doron said, which could indicate the virus is moving closer to a form that Americans can live with.

Even so, Doron added, “at a population level, however, COVID poses more risk because there are so many cases, and hospitals are already so full with both COVID and non-COVID patients.”

A shift away from traditional testing

In recent months, states from coast to coast, have moved to shutter public testing sites, with an abundance of rapid COVID-19 tests now available in pharmacies and through the federal government.

“While home testing has created broader population access to infection status and hopefully better access to treatment, it has also created a major blind spot in our public health surveillance efforts,” John Brownstein, Ph.D., an epidemiologist at Boston Children’s Hospital and an ABC News contributor, said. “The latest BA.2 surge was masked by the shift in testing behavior and likely delayed decisions on public health interventions.”

The shift away from traditional COVID-19 testing has left some health experts worried about continued issues of access to adequate healthcare and preventative health tools, such as testing and antiviral treatments, to protect vulnerable communities.

According to ABC News’ analysis last summer of pharmacy locations across the country, there are 150 counties where there is no pharmacy, and nearly 4.8 million people live in a county where there’s only one pharmacy for every 10,000 residents or more.

“What concerns me even more is what might be happening in communities and among families with fewer resources. Public testing sites have closed, home tests are expensive at the drugstore, and navigating the system to order free tests or get tests reimbursed by insurance requires literacy and technology,” Doron said.

Broader insights on infection through home testing and wastewater sampling will be critical in the future to fully understand the scope of surges and protect all Americans, Brownstein said.

Virus not disappearing in low-transmission counties

This winter, following the omicron surge, the CDC released a new risk level map, which shifted away from focusing on the level of transmission within a community, and rather shifted the attention to hospital capacity and admission levels.

The rollout of the new map, which aims to help people and local officials assess when to implement potential mitigation measures, caused controversy among some Americans, explained Doron. While some people argued the shift in metrics was long overdue and a sign of the times, others said the move was premature.

“Some people were happy because they felt that we were beyond the time period in which we needed to reimpose restrictions and mandates every time cases increased, given widespread population immunity from vaccination and infection,” Doron said. “It made other people angry because a transition to a medium or high-risk status now requires increases in hospitalizations, which are lagging indicators, in other words there can be a lot of cases before hospitals get full, and some people might choose to take extra precautions sooner.”

Brownstein noted that given the shift away from transmission rates, some Americans may not be fully aware of the continued dangers of the virus, as a green county is not necessarily indicative of the virus simply disappearing.

“While the CDC map reflects decreased risk of severe complications from COVID infection, it unfortunately hides places with high community transmission,” Brownstein said. “This masking of risk may provide a false sense of security especially to those at high risk of hospitalization and death.”