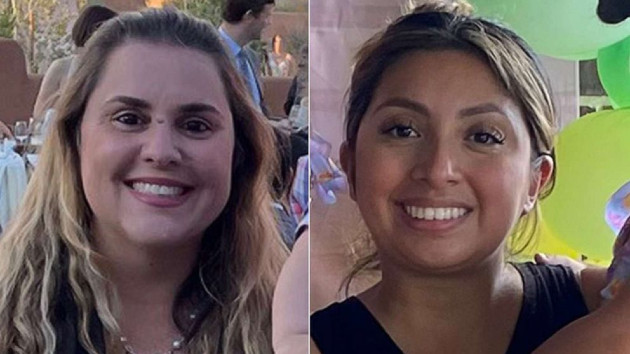 (NEW YORK) — Parents across social media are speaking out about their families’ firsthand experiences as the ongoing “tripledemic” of respiratory syncytial virus, influenza and coronavirus continues to spread across the U.S.

According to the Centers for Disease Control and Prevention, multiple regions of the country are “nearing seasonal peak levels” for RSV. Meanwhile, the CDC also notes that flu activity is “high across the country” with “at least 13 million illnesses” this season so far, and COVID cases have risen in the month of December, bringing total cases to over 99 million as of last Friday.

Abigail Murray’s 3-year-old daughter Cayson was one of the patients with RSV who was admitted to the emergency room. Murray and her husband Chase are parents to triplets Cailyn, Caiyd and Cayson, 3, and Carter, three months. In early November, the 27-year-old said she noticed her daughters started developing fevers, and for two weeks, her girls were in and out of multiple hospitals while Cayson had to receive treatment in a pediatric intensive care unit in the Houston area.

“The doctor also told us to look for … breathing retractions. So, if her ribs are caving in and her nostrils are flaring, that means that she was struggling to get to breathe,” Murray told ABC News’ Good Morning America. “I noticed that Cayson was really struggling to breathe so her lips looked almost blue and then she was having respiratory retractions. So, we messaged the pediatrician, and he said go ahead and take her to the hospital, so we did.”

“It got pretty scary because before she got better, she got worse,” Murray added, explaining that she went back on family medical leave and took time off as a high school chemistry teacher to care for her daughter immediately after just returning to work after giving birth in September.

“My students hadn’t had a teacher since August so they’re wondering where I am and I’m thinking in the back of my mind, ‘Oh my God, I need to turn in sub plans, grades are still due, things like that,’ ” the mom of four said. “And then my husband still has a company to run. He was still getting phone calls at the hospital, so it was really hard balancing all of that and then my children as well.”

The Texas resident isn’t alone. Vanessa Desani of Nashua, New Hampshire, was forced to work remotely or request days off from her job as an academic adviser and teacher at a community college in Massachusetts when her 11-month-old son became sick this fall.

Desani, who is from Brazil, traveled back to the country with her husband Kevin, a professor, and her son Ben over the summer. The family came down with COVID but by the following month, Ben was well enough to start day care full time since Desani and her husband both have full-time work schedules and Desani was also in graduate school.

However, shortly afterward, the 39-year-old mom said she had to repeatedly postpone work and school to care for Ben, who came down with other illnesses, including an RSV infection.

“They offered me the job to start in October but because he was getting sick so often, I had to tell them that I couldn’t start full time in October. So, I asked them … to wait for another month because there was no way I could commit to anything, and I started Nov. 8 — and I still had to miss work because he was still getting sick,” Desani told GMA.

“The guy who works at the urgent care already knows us because we were there multiple times with ear infections, RSV, [hand, foot, and mouth disease] and you name it,” Desani said.

“This past month, some days I was wondering, ‘Should I just stop working? Should I go back to part time because is this really working right now?’ … It’s tough,” Desani added. “It makes me sometimes feel like I wish I could have the money and just hire somebody to just stay home with him and get him out of day care, but I can’t.”

Because she’s had to care for her son, Desani also decided to put a hold on her master’s coursework too.

“All the days that I thought he was going to be in day care he was home, so I’m taking a break from that and hopefully, maybe, in January I’ll go back,” she said. “We are tired … my husband and I are still doing what we have to do but it’s emotionally and physically exhausting.”

Michelle McCready, the deputy executive officer and interim CEO of the nonprofit Child Care Aware, which represents over 400 child care resource and referral agencies and helps parents find child care in their area, told GMA the “tripledemic” has exacerbated inequities and the imbalance of economic security and the mental health crisis within American families that the pandemic blew the door open on.

“It’s such a tough time to be a parent of young children right now with this ‘tripledemic’ going on,” McCready told GMA. “When their children are sick — and we’re seeing again, just getting hit with the flu, getting hit with RSV, another surge of COVID happening post-Thanksgiving — parents are really strained and stressed with trying to manage their careers and then also having to really face the impact of picking up their children, having to stay at home with their children and take care of the young ones.”

“We’re talking about illnesses that don’t just go away in 24 hours. COVID or RSV or the flu can take weeks sometimes, so we’re really seeing parents in a mental health crisis as well, trying to juggle it all,” McCready added.

Aside from taking health precautions like washing hands and covering coughs and sneezes, McCready said from her view, more needs to be done to support parents, including implementing more paid leave.

“We need policies and measures and investment, frankly, in place that can help support the child care programs themselves to stay operational and take care of the children, especially in times of crisis like we saw with the pandemic and now we’re seeing with all these other communicable diseases,” McCready said. “And so, [we need to be] continuing investment, and ensuring that policymakers are putting it front and center on their agendas.”