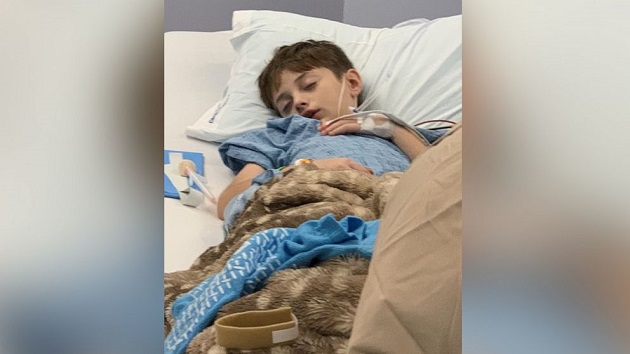 (FORT WORTH, Texas) — A Texas mom is urging parents to send their kids to school wearing masks after she says her 11-year-old son was diagnosed with multisystem inflammatory syndrome a month after testing positive for COVID-19.

Angie Abbott said she and her son Cason went to see a doctor on Nov. 8, 2020 because he wasn’t feeling well; he’d been dealing with symptoms like a sore throat. Carson then tested positive for COVID-19, but they were sent home because his condition didn’t require hospitalization. Abbot said she monitored him from home, where he just “wanted to lay around and watch movies.”

Having just lost her fiancé, who she says died from a stroke, Abbot said she became “worried” that his “lethargy” was from depression and called a local pediatrician, who advised her to take him to a hospital.

In December 2020, Abbott said she twice brought her son to a local hospital in Abilene, but the doctors couldn’t figure out what was wrong. When Cason’s symptoms worsened, she said she took him to Cook Children’s Medical Center in Fort Worth.

“Immediately, they knew he had MIS-C,” she said. “His inflammation markers were extremely high with the swelling. He was swollen on the outside of his face, his hands and his feet. He had a rash pretty much all over him. His eyes were really bloodshot and red, and there were dark circles under his eyes.”

“I was scared to death,” Abbott continued. “I didn’t even know what MIS-C was.”

MIS-C is a condition where different body parts, such as the heart, lungs, kidneys, brain, skin, eyes and gastrointestinal organs can become inflamed. While it’s unclear what causes MIS-C, the Centers for Disease Control and Prevention says that many children who have MIS-C had COVID-19. The CDC has recorded 4,404 cases of MIS-C since May 2020.

“MIS-C has a median age of 9 years old,” said Dr. Priscilla Hanudel, an emergency medicine physician in Los Angeles and member of the ABC News Medical Unit. “Masking is crucial to preventing children from developing this severe illness, particularly because ages 11 and under aren’t yet vaccine-eligible.”

The morning after he was admitted, Abbott said Cason wouldn’t wake up and nurses couldn’t get a blood pressure reading on him. They rushed him to the intensive care unit, where he was in “critical condition,” she said.

“The doctor told me that if I would’ve waited until the next morning to drive him to the hospital, he probably wouldn’t have made it,” Abbott said.

Although Cason was released from the ICU and sent home a month later in January, he still has to return to Cook Children’s Medical Center for regular tests and lab work, Abbott said.

“His inflammation markers and several of his labs are way off,” she said. “He now has no immunity because of the MIS-C treatment.”

Treatments for MIS-C work to reduce inflammation in the body and include antibiotics, steroid therapy and intravenous immunoglobulin, which is a blood product made of antibodies, according to the Mayo Clinic.

Cason is now immunocompromised, Abbott said, and dealing with symptoms of MIS-C like fatigue and inflammation. She’s worried he might get reinfected when he returns to school at Wylie West Junior High, where he’ll be a sixth-grader starting Aug. 18.

“We just got released last week from his infectious disease doctor to go back to school wearing a mask,” Abbott said. “So here’s my thing that I’m worried about as a mom: what about these other kids that he’s going to be around? Most of them won’t be wearing masks and will not be vaccinated because they’re under 12.”

After Texas Gov. Greg Abbott’s executive order banning government entities, including school districts, from requiring people to use masks, Cason’s school is one of many that will not be mandating mask use during the upcoming school year.

Abbott said that because of her son’s weakened immune system, Cason won’t be eligible for the vaccine when he turns 12 on Sept. 3. The CDC recommends people with MIS-C delay vaccinations for 90 days from the date of diagnosis.

“It’s the only thing that’s been on my mind,” Abbott said. “It’s not just a daily thing. It’s every moment of every day I’m worried about him. … I feel like we’re going into a war zone without any protection of our own.”

Cason’s school also won’t be offering any form of remote learning, Abbott said. As a working single mother, with no childcare options, she’s unable to pull Cason out of school and homeschool him.

“My child is still sick … it’s very scary to me if my child was to get COVID again,” Abbott said. “I don’t even want to think about what that might look like for us.”

Wylie West Junior High did not immediately respond to a request for comment from ‘GMA’ for comment about Cason’s remote learning.

Abbott is now urging parents to take the virus more seriously and to consider how valuable masks and the vaccine are in containing the spread.

“Be thankful that your world has not turned upside-down like mine has,” Abbott said. “COVID and MIS-C are very real in my home, and [it’s] very devastating the effects that it’s had on my home, so please don’t sit there and say it’s no big deal.”

She added, “If somebody was able to walk in my shoes and go through what I went through with my child, I think there’d be no doubt in their minds that they wanted the vaccine — that they never wanted to be that sick or give that to someone else.”

As for Cason, Abbott calls him a “trooper.”

“He’s a sweetheart,” she said. “He worries more about me getting sad for any time that we get a bad diagnosis or something to be concerned about. He’s never worried about himself ever. He’s never complained about this one time — he feels such a need to be protective of me.”