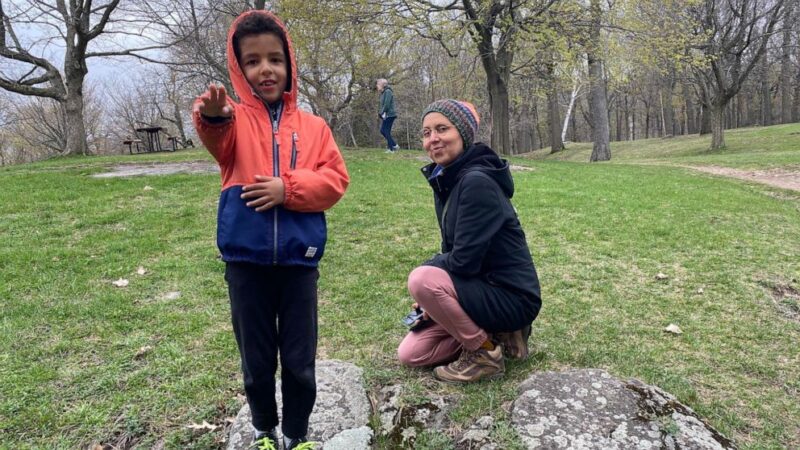 (MONTREAL, Canada) — Dr. Nadia Chaudhri has been battling Stage 3 ovarian cancer for the past year, undergoing a hysterectomy and several rounds of chemotherapy.

When Chaudhri, a 43-year-old neuroscientist and professor from Montreal, Canada, was hospitalized again this week, she learned that the cancer had returned.

As Chaudhri and her husband received the devastating news, she said their thoughts immediately turned to their 6-year-old son, whose name Chaudhri asked not be used.

“My husband and I made the decision that we needed to tell our son what is going on because all the treatments are failing me,” she said. “He already knew that I had cancer. He knew that I was still taking chemotherapy medication and trying to get better, but I don’t think he had a sense of how bad it is.”

Early on Tuesday morning, the day she had planned for the conversation with her son, Chaudhri said she woke up crying and feeling “completely devastated.”

In need of an “outlet” for her grief, Chaudhri turned to Twitter, where she has been keeping in touch with friends, colleagues and students, and posted about the conversation she was preparing to have.

“Today is the day I tell my son that I’m dying from cancer. It’s reached a point where he has to hear it from me,” she wrote. “Let all my tears flow now so that I can be brave this afternoon. Let me howl with grief now so that I can comfort him.”

Today Is the day I tell my son that I’m dying from cancer. It’s reached a point where he has to hear it from me. Let all my tears flow now so that I can be brave this afternoon. Let me howl with grief now so that I can comfort him. pic.twitter.com/PDgy8qbTIL

Chaudhri said she did not look at Twitter for many hours later and was later shocked by the overwhelming response to her tweet and the conversation it had started.

“I was really shocked that the tweet went viral,” said Chaudhri. “It really seemed to strike a nerve.”

“A lot of people have written to me unsolicited and told me how important it was that their parents had that conversation and they assured me how they turned out fine, or they told me about situations where they didn’t have the conversation and how dreadful that was,” she said. “I’ve had a lot of validation.”

Among the thousands of responses to Chaudhri’s tweet, some people wrote to share their own experiences, while others offered advice.

“My mother was this honest with me about her cancer when I was your son’s age. Her honesty and courage have had a lasting effect on me and those around her,” one commenter wrote.

“My dad lost his mom from cancer when he was a kid. No one told him anything until she was dead. It’s a beautiful thing that you are giving your son the gift of truth. I’ve been taught that love is truth. Your son will be ok. My dad was and raised us this way,” wrote another.

“Make videos for his future special days (graduations, weddings, first job, first break up) so he’ll be able to continue to feel your love, wisdom, sympathy and pride,” said a third.

Chaudhri said she spoke with a close friend who is also a psychologist to prepare ahead of time for her talk with her son. When the time came on Tuesday afternoon, the conversation was short but meaningful, according to Chaudhri.

“One of the things my son said was, ‘I wish I didn’t know. I wish you hadn’t told me,"” she recalled. “We said, ‘We have to tell you because you’re part of the family and we didn’t want you to have a bad surprise. We wanted to give you the chance to ask your questions and talk about it and feel things with us, as a family."”

“I’m so glad we did it because he needed to hear it and he understood right away what was said,” she added. “It just worked out well even though it was the hardest conversation I’ve ever had.”

Our hearts broke. We cried a lot. And then the healing began. My son is brave. He is bright. He will be okay. And I will watch him grow from wherever I am. Today was the hardest day of my life. Thank you for all for your love. pic.twitter.com/sCZFW9d8T5

Chaudhri said that throughout her cancer battle, and especially at this point, she has been trying to follow advice she received early on.

“I realized that my response is going to affect how everybody responds around me, so something I’m trying to do is help the people around me sort of reach a point where we get through this together,” she said. “I know it’s going to be a shock and it’s going to be sad but I’m trying to help get everybody to a place where it can be more of a celebration of my life and less of a shock of my death, and my son is part of that.”

Chaudhri, who is now home from the hospital, said she knows the conversation she and her husband had with their son is just the first of many, describing it as one that just “opened the door to the conversation that we might need to continue to have, an ongoing one.”

I have been sprung from the hospital. In my happy place, the backyard, enjoying the weak rays of sunshine with my little love. pic.twitter.com/ZinQcott8i

While at home with her family, Chaudhri is also using her time to draw attention to a cause near to her heart, raising money to allow young scientists to be able to continue the research she was doing on drug addiction.

Chaudhri, who moved from Pakistan to the U.S. at age 17 to attend college, had to close her research lab in September due to her diagnosis.

She said she decided to turn her frustration with not being able to work into an opportunity to raise money for underrepresented scholars in her field. Her efforts have so far raised more than $180,000.

“Through this process I’ve had people telling me things that are surprising, like [graduate students] describing interactions with me that have been meaningful to them,” said Chaudhri. “I didn’t realize I was having those impacts and it turns out I did.”

“It’s important to be good and be kind and be honest and have integrity,” she said.