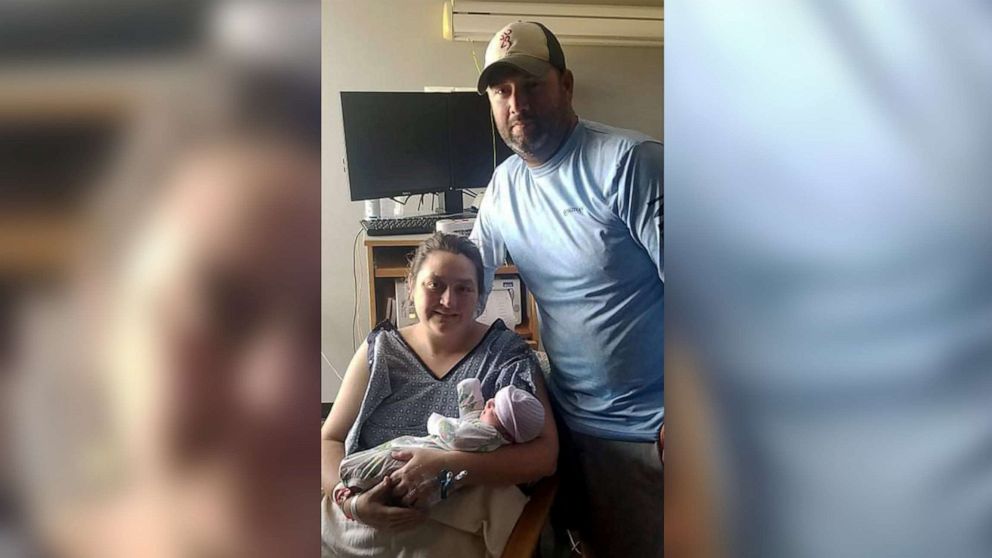 (LOCKPORT, La.) — Ross and Angeline Eschette and their 7-year-old son evacuated their home state of Louisiana for Texas this weekend as Hurricane Ida prepared to hit.

The Eschettes will return to their home in Lockport later this week as a family of four after Angel Eschette gave birth while evacuated.

“She wanted to be part of the hurricane party,” Ross Eschette said of the couple’s newborn daughter, Adeline Grace, born on Aug. 30, just after Ida battered Louisiana as a fierce Category 4 storm.

Angeline Eschette’s original due date was Sept. 17, but her water broke overnight on Aug. 30 as they stayed with extended family members at a hotel in Nacogdoches, Texas.

The Eschettes, both natives of Lockport, a small town of about 3,000 people one hour outside of New Orleans, said they had weathered hurricanes before, but did not want to take any chances with Ida while expecting their second child.

“My No. 1 concern was to get as far away from the storm as possible, just to keep her from having the baby,” said Ross Eschette, 36. “In planning the evacuation, it wasn’t just let’s find a [hotel] room and go there, it was let’s find a hospital and then find a room nearby.”

The Eschettes said they not only had to evacuate their home and find a hospital away from home that they could be near, but also did so while Angeline Eschette, 33, dealt with a higher risk pregnancy due to gestational diabetes and was quarantining after testing positive for COVID-19.

“I was waiting to get vaccinated until after I gave birth. Even though they said there’s no harm, I still had my concerns about it,” she said. “But I was very lucky to not have a severe case.”

The Centers for Disease Control and Prevention last month strengthened its recommendation for COVID-19 vaccination during pregnancy, stating that all women who are pregnant, breastfeeding or trying to get pregnant now or might become pregnant in the future should get a COVID-19 vaccine.

The Eschettes and their family members drove an RV six hours from their home in Lockport to Nacogdoches, where Angeline Eschette gave birth at Nacogdoches Medical Center.

Ross Eschette, who did not contract COVID-19, was able to stay with his wife and daughter in the hospital room, but was not allowed to leave due to COVID restrictions.

Adeline Grace was born healthy, weighing in at 8 pounds and one ounce, according to her parents.

Both of Adeline’s great-great-grandmothers are, by chance, named Ida, according to Angeline, who said she did not consider the name for her daughter.

“When Hurricane Katrina hit our area, everybody named their babies Katrina after that, so my nephew thought it would be funny to name her Ida and then said he was going to call her Ida Lynn,” said Angeline. “I said, ‘No, that’s not going on the birth certificate."”

Both Angeline and Ross Eschette said they have had to balance their joy at the birth of their daughter with the heartache of the devastation caused by Hurricane Ida, particularly in Lockport.

The family said the hospitals in the area, including where Angeline planned to give birth, all had to evacuate their patients during the storm for various reasons.

“In the situation that we were in, we definitely made the right choice,” said Ross Eschette. “And we’ve been treated with the utmost respect [at Nacogdoches Medical Center]. They definitely made our experience everything we needed it to be.”

“I feel lucky to be safe in a place that was out of harm’s way and that I had a safe place to deliver,” added Angeline Eschette.

The couple said they have heard from neighbors that their home’s roof was severely damaged but their house is still standing. They expect electricity in their town to be out for the next three to four weeks.

As of Wednesday, over 884,000 customers remained without power in Louisiana, according to a report from the Cybersecurity and Infrastructure Security Agency (CISA) obtained by ABC News.

“It’s hard for us to stay here for a while financially so we will try to make our way back home towards the end of the week,” said Angeline Eschette, who was discharged from the hospital on Wednesday. “We have a camper and they have a few campgrounds where we’re going to try to set up because we can’t go back home right now. Our town is just a disaster.”

Ross Eschette said he has been in touch with friends who stayed behind in Lockport to see what supplies are needed so that they can try to get them in Texas before they drive home.

“People are watching the news and seeing the devastation of what our hometown and the surrounding area are going through, but the number one thing about us is we are the most resilient people in the world,” he said. “We all come together and we’re going to rebuild better than ever. It’s definitely not going to stop us.”