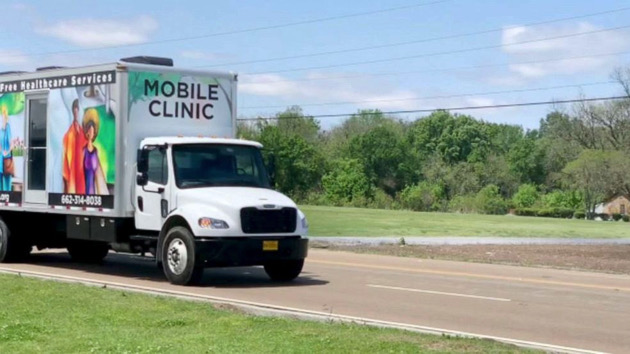 (NEW YORK) — On wheels across the Mississippi Delta region, a group of three women is pulling up their sleeves and reaching underserved communities with free reproductive and sexual health care services.

“Something we have to accept [is] that we can’t solve every problem; like we can’t buy a mammogram machine, we can’t have a colonoscopy on-site, we can’t do surgery,” Weinberg said. “But we can add what we can, and if we’re able to get the resources to pull it off, then we just kind of expand whatever ways we can.”

The staff behind the clinic hopes to provide health care services to underserved communities across the area. By providing services around reproductive and sexual health care, Juliet Thomas, Plan A’s community health worker, hopes to destigmatize the conversation around those topics.

“It is [considered a taboo] when you talk about sex, birth control or anything like that’s really not talked about,” Thomas said.

Weinberg said she built the clinic on the belief that Roe v. Wade would one day be overturned. While the clinic does not offer abortions, Weinberg said they play a role by offering preventive measures to avoid pregnancies.

“I built the organization on the assumption that [Roe v. Wade] was kind of destined to be overturned,” she said. “Roe v. Wade being overturned in really any capacity doesn’t directly impact our day today, but it has an incredible impact on the community that we serve.

“As we seek to empower women and give them the options to kind of move forward with their reproductive health in whatever direction it is, that’s more challenging because their options are limited within the state.”

To fit the needs of the community, Plan A has expanded its operations to add primary care services like blood pressure screenings as well as COVID-19 vaccines. A 60-minute drive from where the mobile clinic is parked, Plan A has a brick-and-mortar clinic in Louise, Mississippi, to offer additional services to a broader community.

Mississippi is one of 12 states to not expand Medicaid since the passage of the Affordable Care Act in 2010 — a critical source of revenue for hospitals and a safety net for poor Americans. The federal government covers 90% of the costs for Medicaid, leaving 10% to be covered by the state.

Although at least eight expansion bills were proposed in the 2022 legislative session, not one was debated.

For Brock Slabach, chief operations officer of the National Rural Health Association, the issue with expanding Medicaid is around the arguments of federal involvement in state policy.

If expanded, the American Rescue Plan would provide an additional $600 million per year to the state and qualify more than 225,000 Mississippians.

The roadblocks, however, lie within its own government — with Gov. Tate Reeves and Speaker of the House Philip Gunn being two of Medicaid’s fiercest critics.

“I just don’t think Medicaid expansion is realistic, personally, I’m not for it,” Reeves said during a January interview with WAPT. “I don’t see that as a way forward in Mississippi. We need to be looking at ways to get people off Medicaid, not put them on Medicaid.”

But their stand on the issue is not what the majority population thinks. According to a Millsaps College and Chism Strategies poll, some 60% of voters believe that Medicaid should be expanded.

Patients like Lisa McCarty, who was formerly uninsured, sought the services of Plan A to access contraceptives.

The care and staff made McCarty a loyal patient. Without Plan A, McCarty told ABC News, she would be struggling with paying the doctor’s bill — or even have another child.

“Everyone knows each other and we’re so small here that it’s uncomfortable because you feel like, ‘OK, well, hey, this person may know what’s going on with me and I’m, you know, I don’t feel comfortable,’” McCarty said.

Now with insurance, McCarty said she will continue visiting Plan A, in part because of the wide variety of services outside reproductive health that are offered by the clinic.

As the clinic continues to expand, Desiree Norwood, Plan A program coordinator, hopes to reach more underserved communities across the state.

“I’m very excited because I know that there’s so much more great work that Plan A is going to do for the area, and I feel hopeful. Often the Mississippi Delta is looked at as one of the unhealthiest places, but we’re determined to change the narrative “