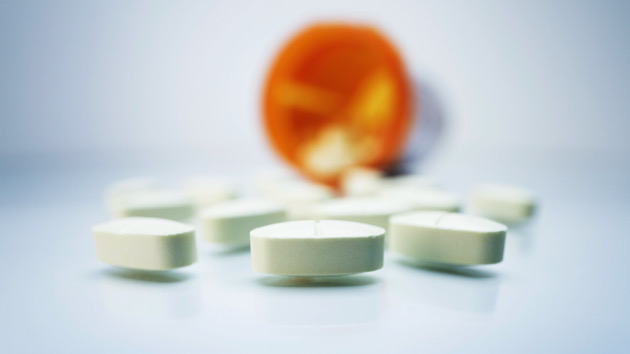 (NEW YORK) — ABC News correspondent Bob Woodruff and his cameraman Doug Vogt were covering the Iraq War in 2006 and embedded with U.S. and Iraqi forces when an explosion nearly killed them.

Woodruff and Vogt were severely injured and rushed to the hospital in Baghdad, the place where Woodruff met the medic who he says helped save their lives, Sgt. Dave Williamson, including by giving them pharmaceutical-grade fentanyl to manage their pain.

Once in the trauma bay, Williamson and his surgical team were able to treat Vogt and Woodruff.

“We knew that [Woodruff and Vogt] were in, in serious, serious, serious dire straits … we just needed to get a tube in your throat and have you breathing off machines,” Williamson said.

Due to the severity of Woodruff’s injuries, Williamson injected him with multiple drugs, including fentanyl. Williamson said he had complete control over the drug, and he knew that it was the kind of opioid that would manage Woodruff’s pain.

“Our go-to drug was fentanyl. So at the time the fentanyl that we had was given in micrograms and it was glass vials,” Williamson said. “We had a very solid understanding of what it is, what it’s capable of doing and also how dangerous it was.”

Fentanyl was developed in 1959 to be used for chronic pain, anesthesia as well as sedation, according to the Drug Enforcement Administration. The drug, according to the National Institute on Drug Abuse, is 50 to 100 times more potent than morphine.

Although fentanyl and other opioids are intended for patients suffering from extreme pain, they are also powerfully addictive and carry strong warnings about the potential for harm.

Today, medical experts say illicit versions of the drug are driving the opioid crisis and contributing to one of the leading causes of drug overdoses in America.

Originally made for sedation during surgery, fentanyl rapidly began infiltrating the illicit drug market. Considered to be one of the most powerful opioids ever created — Mexican cartels are pouring tons of fentanyl over the U.S. border every year, according to the DEA.

Woodruff and Vogt safely returned to the U.S. and, as the war began to wind down, Williamson left the military. The effects of the war, however, stayed with him for years after his return and he was soon diagnosed with post-traumatic stress disorder.

“You’re looking for anything to numb the pain. Even though it may not be physical pain, it’s something that just doesn’t go away,” Williamson said. “It just stays with you and it just gnaws and you’re trying to emotionally cope with everything that happened over the course of 18 months for 12 to 14 hours a day, seven days a week, and you don’t have time to deal with it then, and now you’re home or you’re out of the Army and now you’ve got time to process it.”

Now at home and away from the conflict, the medic who administered opioids to numb his patients’ pain, developed an addiction to them.

Williamson was then introduced to OxyContin by a close friend, making his addiction even worse. He would often buy the drug on the street and, before realizing it, the spiral descended from painkillers to meth and even heroin.

“So it’s just this sense of loneliness, of solitude and, before you know it, it’s spiraling out of control,” Williamson said.

His wife, Jessica Williamson, also suffered from opioid addiction. Jessica said she had her first contact with the drug after a car wreck when she was 17. She was prescribed painkillers to help her recovery.

“OxyContin came around and that was a huge problem for me, that was really when things got pretty bad for me,” Jessica said.

The couple began struggling to access OxyContin due to its high price, so they found themselves turning to the streets and using cheaper drugs, such as heroin.

One night, the couple says they believe the pills they got from a dealer were laced with fentanyl — the same extremely powerful opioid Williamson had used to treat Woodruff’s nearly fatal injury.

“We’re sitting in this parking lot and David did his and immediately was, you know, nodding out and was in and out. And I thought, ‘Wow, he did too much.’ Then I started throwing up, I thought, ‘Oh my gosh, I did too much.’ But I knew that I hadn’t done more than what I normally do. And I was sick. I mean, it was scary. It was very scary,” Jessica said.

The couple said they would not knowingly take fentanyl. They both believe that without their years of building a tolerance to opioids, those pills would have easily killed them.

The couple’s turning point, however, was when their 3-year-old son witnessed what they had been hiding for years.

“One of the things that was a turning point was when my 3-year-old walked into my room when I was shooting up and I screamed at him to shut the door,” Dave Williamson said.

Williamson then decided to join a program to seek treatment for his opioid dependency.

With the help of therapy and support groups, the Williamsons said they have stopped using opioids, and their hope is to keep drugs out of their lives forever.

“Once you’re an addict, you’re always an addict. It’s just that we don’t have the want or the need or the desire to chase it anymore,” Williamson said.

“We both see how our lives were then and we see where our lives are now and we like where we’re at now and we know how slippery of a slope it is.”