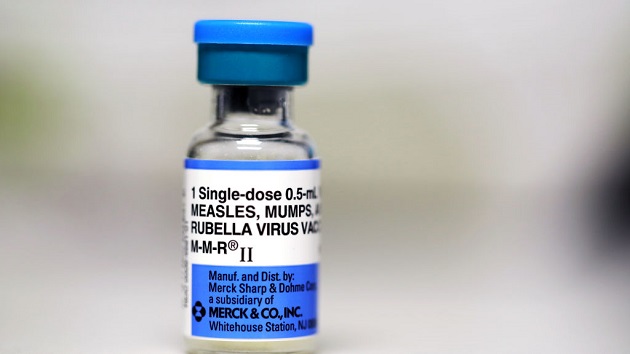 (NEW YORK) — The World Health Organization and UNICEF are warning of a “perfect storm” of circumstances fueling the potential for large-scale measles outbreaks, underscoring worrying signs of increased risk as infections around the globe this year are far above what they were this time last year.

In the first two months of 2022, reported measles cases worldwide increased by nearly 80%, compared to the same timeframe in 2021, the organizations said in a joint news release, adding that conditions are “ripe” for serious outbreaks of the vaccine-preventable illness.

“Pandemic-related disruptions, increasing inequalities in access to vaccines and the diversion of resources from routine immunization are leaving too many children without protection against measles and other vaccine-preventable diseases,” the organizations said, adding that the risk for large outbreaks “has increased as communities relax social distancing practices and other preventive measures for COVID-19 implemented during the height of the pandemic.”

Almost 17,338 cases of the highly contagious disease were reported worldwide in January and February 2022, compared to 9,665 during the first two months of 2021.

“With millions of people being displaced due to conflicts and crises, including in Ukraine, Ethiopia, Somalia and Afghanistan, disruptions in routine immunization and COVID-19 vaccination services, lack of clean water and sanitation, and overcrowding increase the risk of vaccine-preventable disease outbreaks,” the organizations said.

“The agencies are concerned that outbreaks of measles could also forewarn outbreaks of other diseases that do not spread as rapidly,” WHO and UNICEF said, noting that besides its direct effect on the body, which can be lethal, the measles virus also weakens the immune system and makes a child more vulnerable to other infectious diseases such as pneumonia and diarrhea for months after the measles infection — among those who survive.

This is not the first time global health agencies have warned of lagging pediatric immunizations being an issue of urgent address.

In an April meeting, the WHO’s Strategic Advisory Group of Experts noted that disruptions to routine immunization programs puts “millions of children at risk of disease outbreaks,” and “large and disruptive outbreaks of measles have occurred in at least 19 countries during the past 12 months.”

And in the U.S., as ABC has reported, vaccination coverage for kindergarteners fell below the nationwide target during the 2020-2021 school year, according to CDC data, raising concerns about vaccine-preventable diseases such as measles, mumps and whooping cough.

Experts worry pandemic disruptions could inadvertently lead to a growing number of vaccine-preventable illnesses among children.

In 2020, 23 million children missed out on basic childhood vaccines through routine health services, the highest number since 2009 and 3.7 million more than in 2019, the WHO and UNICEF said Wednesday.

As of April 1, 57 vaccine-preventable disease campaigns in 43 countries that were scheduled to take place since the start of the pandemic are still postponed, impacting 203 million people, most of whom are children, the agencies said. Nineteen of those postponed are measles campaigns, putting 73 million children at risk of measles due to missed vaccinations.

In Ukraine, the measles catch-up campaign of 2019 “was interrupted due to the COVID-19 pandemic and thereafter due to the war,” the WHO and UNICEF said. “Routine and catch-up campaigns are needed wherever access is possible to help make sure there are not repeated outbreaks as in 2017-2019, when there were over 115,000 cases of measles and 41 deaths in the country — this was the highest incidence in Europe.”

As of this April, the agencies said there have been 21 large and disruptive measles outbreaks around the world in the last 12 months. Most of the measles cases were reported in Africa and the East Mediterranean region.

Countries with the largest measles outbreaks since the past year include Somalia, Yemen, Nigeria, Afghanistan and Ethiopia.

The figures are likely higher, as the pandemic has disrupted surveillance systems globally, with potential underreporting, the agencies said.

The agencies cited insufficient measles vaccine coverage as the primary reason for the outbreaks “wherever they occur.”

“Measles is more than a dangerous and potentially deadly disease. It is also an early indication that there are gaps in our global immunization coverage, gaps vulnerable children cannot afford,” UNICEF Executive Director Catherine Russell said in a statement. “It is encouraging that people in many communities are beginning to feel protected enough from COVID-19 to return to more social activities. But doing so in places where children are not receiving routine vaccination creates the perfect storm for the spread of a disease like measles.”