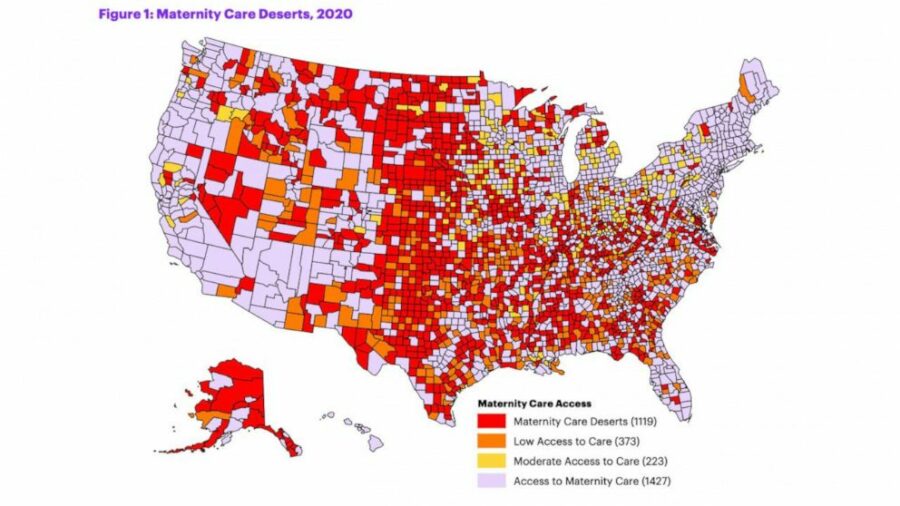 (NEW YORK) — Maternal care is becoming increasingly difficult to access in the United States, according to a report released Tuesday by the March of Dimes, a nonprofit organization focused on improving the health of pregnant people and babies.

More than a quarter of counties in the U.S., 36%, have no obstetric hospitals or birth centers and no obstetric providers, such as obstetricians, gynecologists and certified midwives or nurse midwives, according to the report, which describes those areas as “maternity care deserts.”

That figure is an increase from 2020, and means that more than 2 million women of childbearing age — ages 15 to 44 — in the U.S. live in maternity care deserts, the report found.

Nearly 7 million women live in areas with little to no access to maternity care, mostly in the South and Midwest, according to the report.

“We know that lack of access to crucial maternal care is a driving factor for the poor outcomes that we see for moms in this country, for high mortality rates,” Dr. Zsakeba Henderson, March of Dimes’ interim chief medical and health officer, told “Good Morning America.” “And we know that the United States continues to be one of the most dangerous industrialized nations to give birth in.”

Describing the increase in so-called maternity care deserts in the U.S., Henderson added, “This problem is worsening. It’s not getting better.”

Around 700 women die each year in the U.S. due to complications of pregnancy or delivery, according to the Centers for Disease Control and Prevention.

During the coronavirus pandemic, maternal mortality rates in the U.S. climbed 33%, with Black and Hispanic women dying at much higher rates than white women, according to research published by the University of Maryland and Boston University .

Black, Hispanic and Native American women are also disproportionately impacted by the lack of access to maternal care, March of Dimes researchers found.

According to the report, in 2020, 1 in 4 Native American babies and 1 in 6 Black babies are born in areas with no or limited access to maternity care services.

“Communities of color are disproportionately impacted by this crisis,” said Henderson. “And we know that it’s not just an issue of access but an issue of quality.”

The reason why more women have less access to maternity care in 2022 stems from a variety of factors, including hospital closures and COVID-19, according to the report.

Hospital closures can be attributed to everything from staffing difficulties to low birth volumes that make maternal care not profitable enough to remain open to higher proportions of patients on Medicaid, which can lead to greater financial vulnerability for hospitals, according to Henderson.

The impact of a lack of maternity care is felt most in rural areas, where more than 60% of the nation’s maternity care deserts exist and where it’s estimated that only 7% of obstetric providers practice, according to the report.

The data on maternal care was collected prior to the U.S. Supreme Court’s decision in June that overturned Roe v. Wade and the constitutional right to abortion in the U.S.

Henderson said she is concerned that new state restrictions on abortion care could lead to an even larger gap of maternal care access in rural areas.

“Research has shown that there’s a high likelihood that these restrictions may not only increase the rate of unsafe abortions that may impact maternal and infant death rates but may also impact the number and quality of providers that are available to provide other maternity services,” she said. “We are definitely particularly sensitive to the impact that it will have on the populations that we know are already vulnerable and have been underserved and are already impacted by poor outcomes.”

Henderson said that while the problem of lack of access to maternity care in the U.S. is daunting, it’s not unsolvable.

For the past two years, the March of Dimes has operated mobile health units in different states to bring care to people in low-access areas and has started a venture philanthropy initiative to invest money in early-stage companies working to bring maternal care to more people.

The organization is also focusing on policy through its so-called Mamagenda that calls on lawmakers to pass legislation to improve maternal care, according to Henderson.

“We are supporting making sure that all women have quality, affordable health insurance and health care,” she said. “Providing preventive and supportive care for women during and after pregnancy, which includes extending Medicaid postpartum coverage to 12 months and expanding access to midwifery and doula care, these are proven solutions that we know will help address this crisis.”