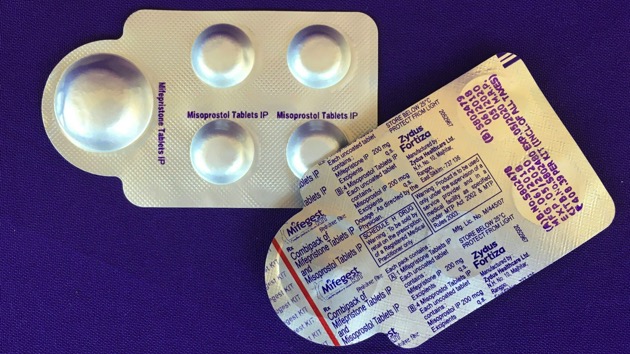 (NEW YORK) — For the first time, medication abortion now makes up the majority of abortions in the United States, according to data released Thursday by the Guttmacher Institute, a reproductive rights organization.

According to the institute’s survey of known abortion providers in the U.S., 54% of abortions in 2020 were done by medication abortion, a process that involves taking two pills. The number marks a significant increase from the last survey, done in 2017, when medication abortions made up 39% of all abortions.

If Roe is overturned, more than half of the nation’s 50 states are prepared to ban abortion, according to a Guttmacher Institute report released last year.

At the same time, many states are already enacting restrictions on abortion access, including medication abortion.

More than one dozen state legislatures have introduced bans or restrictions on medication abortion so far this year, according to the Guttmacher Institute.

Texas, which last year implemented an unprecedented six-week abortion ban, has already enacted a law restricting access to medication abortion, including banning the mailing of abortion-inducing drugs and narrowing the window in which physicians are allowed to give the medication to seven weeks.

Medication abortions were first approved by the U.S. Food and Drug Administration (FDA) in 2000. FDA guidelines advise that abortion-inducing pills are safe to use up to 70 days, or 10 weeks, after conception, though evidence shows it can be safe even later in pregnancy, according to the American College of Obstetricians and Gynecologists (ACOG).

In most cases in a medication abortion, mifepristone is taken first to stop the pregnancy from growing. Then, a second pill, misoprostol, is then taken to empty the uterus.

Of the two medications, mifepristone is more restricted by the FDA. Since 2011, the agency had applied a risk evaluation and mitigation strategy (REMS) to mifepristone, preventing it from being distributed at pharmacies or delivered by mail like other prescription drugs.

In December, under the Biden administration, the FDA permanently lifted its restriction on mifepristone that required providers to dispense the drug in person, allowing it to be delivered by mail.

In its updated guidance online, the FDA cited the need to “reduce burden on patient access and the health care delivery system.”

Women still must obtain the pill through a certified health care provider though and the FDA’s decision is subject to state laws that can criminalize the practice.

Telemedicine for medication abortion is effectively banned in 19 states, which require a provider to be physically present when administering the pill, according Guttmacher.

Proponents of the FDA’s decision to lift its restriction on mifepristone say that allowing greater access to medication abortion, including via telemedicine, gives more options to the people who need them the most.

Around 75% of abortion patients are low-income residents, and nearly 60% of U.S. women of reproductive age live in states where access to abortion is restricted, according to Guttmacher.