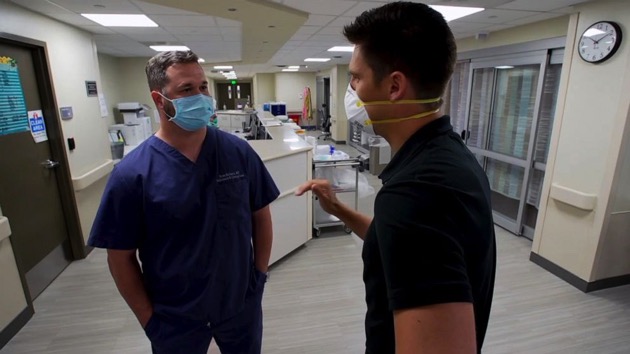 (BATON ROUGE, La.) — In Louisiana, the COVID-19 crisis is leaving hospitals teetering on the edge of collapse.

The state currently has the nation’s highest case rate, and hospitalization levels — more than 3,000 at last count — are stretching the health system to a breaking point with patients overwhelming intensive care units and staffing in short supply.

“Our volume, over the past couple of weeks, has been outrageously high,” Dr. Jon Michael Cuba, service line chairman for emergency medicine at Ochsner Health in Baton Rouge, told ABC News. “There has been a ton, a ton of COVID. We are built to deal with this, but with this surge, there is a lack of nurses, a lack of beds and it’s hard to get enough physicians to see the onslaught of patients that are coming in.”

In the last month alone, hospital admissions have surged by more than 340%, amidst a steady rise in daily cases over the last seven weeks.

The situation in Louisiana, driven by the highly infectious delta variant, is mirrored in other Southern states where vaccination rates are relatively low.

In Florida, more patients are currently hospitalized than at any other point in the pandemic, and in Alabama, there no remaining ICU beds available statewide.

In Louisiana, less than 39% of the state’s population is fully vaccinated. Nearly all of those currently hospitalized with COVID-9 in the state — 91% — are unvaccinated, according to state data.

Hospitals across the state are struggling to keep up with the rapidly changing pandemic. There is simply not enough staff to deal with the influx of COVID-19 patients, in addition to the non-COVID-19 patients, doctors said, thus greatly straining the healthcare system

“We are seeing crazy outrageous numbers of patients,” Cuba explained.

The hospital is now at a breaking point, Richard said. “We do have people calling in to try to get to this hospital that we’re unable to accept,” he said, adding that they have had to send patients to other facilities because they simply do not have the means to care for them. “That’s hard on us, because we want to take everybody that we possibly can and do everything we can, but we don’t have the right means. It’s very frustrating.”

With so many patients needing care, and critical care at that, hospitals have been forced to create makeshift ICUs.

Baton Rouge General opened its eighth COVID-19 ward this week, including one unit in the hospital’s burn unit. Other hospitals in the state have been transforming endoscopy suites, or other medical rooms into untraditional places to care for patients.

In addition, the wait time in the emergency rooms is getting increasingly longer, with critically ill patients forced to stand by for care that was once immediate.

“We are getting crushed in our emergency rooms, our hospitals are filled to the brim,” said Cuba. “If somebody is coming in today with a heart attack, there is a wait. Something we aren’t accustomed to, or comfortable with, but it’s just overwhelming and a cold hard fact of the capacity in the hospitals are starting to get to the bursting point.”

Patients getting younger, and sicker

With more than 80% of Americans 65 and older fully vaccinated, the burden of disease has shifted largely to younger Americans. As of Aug. 7, Americans between the ages of 18-49 make up more than 40% of the patients currently hospitalized with COVID-19, across the country.

Many of the patients who are coming in tend to be younger and sicker, Dr. Abdul Khan, pulmonary critical care physician in the COVID ICU at Ochsner Medical Center in New Orleans noted. He recalled a 40-year-old father, who before being placed on a ventilator, told staff that he was the primary caretaker of a 10 year-old son.

There has also been a staggering increase in younger patients being hospitalized.

“The other thing that we didn’t see in the beginning, is parents visiting their kids,” Khan explained. “The thought of having to visit my kids in the hospital is mind numbing. And that’s what we are seeing.”

Even more concerning, added Khan, is the dreadful reality that “we are having to have conversations with people’s parents about end of life care and things like that. These aren’t kids, but they are 20 years old and 30 years old, and the people that are at their bedsides are their parents.”

One of the patients at Baton Rouge General is 39-year-old disaster relief worker Jessica Cooper, of Baton Rouge, who has been hospitalized with the virus for over 12 days. Cooper, who was unvaccinated, told ABC News, she had wanted to wait for the shot until after she completed an upcoming surgery.

Cooper told ABC News that the infection had depleted her, with every breath a battle. At her worst, she had even written out a goodbye text to her 11-year-old daughter, in case she did not make it out of the hospital.

“I had prayed, made my peace with God. And started typing a text message to her, that way if something happened, and I didn’t make it, she knew I loved her,” Cooper said, adding that this virus is “ageless, it’s colorless — what you can do to protect yourself, it’s not even about you, it’s to protect others.”

Richard noted that people who are coming into the hospital appear to be getting sicker, more quickly, and while in the first three waves of COVID-19, the medical staff felt that it could predict, to some degree, who would get sick, and which people were most vulnerable to the disease, it is no longer the case.

“We’re fooled everyday for what we thought and we’re seeing a lot of young people with no medical problems that were significant or it,” he said. “I thought we had kind of turned the corner and on our way out of this thing… but the delta has truly thrown us a curveball.”

The nationwide shortage of nurses has also left frontline workers stretching their teams responsibilities, in an effort to meet all patients’ needs.

“The amount of nurses is never enough,” said Khan. “We are redeploying physicians. That’s how sick the patients are, and how fast they are coming in. If we have 5, 10, 15 extra nurses, there will be a job for them. That’s how many people are coming to the hospital.”

Teams are also ultimately facing the burden of the physical and emotional toll yet another wave has placed on the staff.

“We are already stressed in our job with the extra hours covering the surge, and then when you see your patients, and worried about what’s in the lobby, worried about who is in the ambulance, am I going to be able to get this heart attack out to the right place, will I find a place for the patient to land? I worry a lot about our teams,” Cuba concluded.