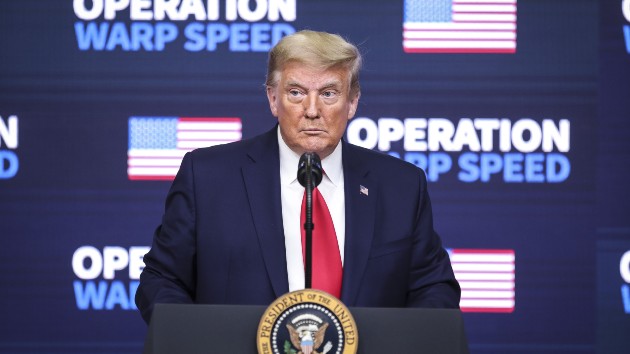 (NEW YORK) — About 40% of the United States’ COVID-19 deaths could have been avoided, according to a new editorial from the Lancet Commission.

The editorial cited certain Trump-era policies, which it says — taken collectively — may have exacerbated the pandemic death count. However, it may be impossible to know exactly how many deaths could have been avoided, considering the real-world complexities of such a calculation, according to Dr. John Brownstein, chief innovation officer for the Boston Children’s Hospital, professor of epidemiology at the Harvard Medical School and an ABC News contributor, who was not associated with the report.

“There are factors that are likely out of our control that could have driven numbers higher,” Brownstein said.

Despite those limitations, Brownstein said the report’s premise was on target.

“The U.S. had far greater death toll than it could have,” he said. “If the country acted appropriately and had a health care system that was fair and equal, no doubt that we would have been in a better position.”

The United States leads the world with 27 million infections and 471,821 deaths, according to data from Johns Hopkins University, with the death toll expected to top half a million dead in the coming weeks. Many of those cases and deaths were preventable, according to the report, which was published Thursday.

The Lancet Commission on Public Policy and Health in the Trump era has been chronicling the effects of the Trump administration’s health policy since 2017, and is made up of U.K., U.S. and Canadian commissioners from a variety of disciplines, including public health, law, economics, politics, epidemiology and medicine. The report is one of numerous commissions by the Lancet on health issues like cancer control in Latin America and liver disease in the U.K.

“Instead of galvanizing the U.S. populace to fight the pandemic, President Trump publicly dismissed its threat (despite privately acknowledging it), discouraged action as infection spread, and eschewed international cooperation,” the report stated.

“His refusal to develop a national strategy worsened shortages of personal protective equipment and diagnostic tests. President Trump politicized mask-wearing and school re-openings and convened indoor events attended by thousands, where masks were discouraged and physical distancing was impossible,” the report continued.

To calculate how many COVID deaths could have been avoided, the commission compared the weighted average death rate in G7 countries — Japan, Italy, France, Canada and the U.K. — to the death rate in the U.S.

Before the pandemic began, the Trump administration took steps that weakened the eventual U.S. response, the report also stated. The administration eliminated the National Security Council’s global health security team and left nearly 700 positions at the Centers for Disease Control and Prevention open because of a hiring freeze — both of which left the country unprepared for a pandemic, according to the Lancet Commission.

Additionally, the number of uninsured Americans grew by 2.3 million during Trump’s presidency, even before pandemic-driven job losses left millions without health coverage, the report stated.

“We exacerbated existing issues in this country, which placed additional burdens on communities of color,” Brownstein said.

Unequal access to health care became especially evident during the pandemic, when Black and Latino communities were disproportionately infected and dying from the virus.

Despite those key failures, which the report cited, however, the health landscape that fueled the United States’ deadly COVID response began long before Trump was in office, the commission found. Between 2002 and 2019, U.S. public health spending fell from 3.21% to 2.45% and public health emergency preparedness funding was cut by one-third. Without that funding, 50,000 state and local health department jobs were cut, effectively reducing the front-line workforce by 20%, according to the report.

Moreover, average life expectancy in the United States has lagged behind other wealthy nations since 1980 and has been falling since 2014. Income and education inequality, as well as structural racism, all of which hurt health, have been problems in the U.S. for decades.

“If there is not a major reversal of federal policy, the drivers of U.S. health stagnation are likely to persist,” the report concluded. “Continuing down this road would lead to continued decline in health, widening health inequalities, and ever more missing Americans.”

The commission recommended instituting single-payer national health care, doubling federal public health spending and compensating Native Americans, Native Hawaiians, Puerto Ricans and African Americans for wealth denied to them and confiscated from them throughout U.S. history, as among the legislative actions the U.S. could take to reduce health inequity.