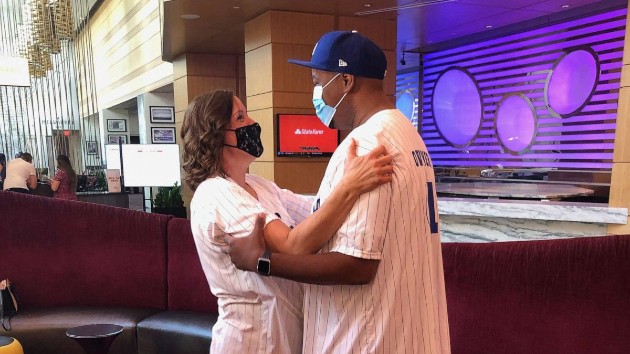 (NEW YORK) — A kidney donor and recipient met for the first time and say they are now the best of friends.

Lisa Sorlie, 53, from Shawno County, Wisconsin, met Booker T. Washington, 41, from California, for the first time at the Milwaukee Brewers vs. Los Angeles Dodgers game on May 2 — nearly two years after the transplant.

“I just wanted to thank her because it changed my life. And whoever would have donated — even if it was a cadaver kidney, I would’ve liked to thank the family in some kind of way. Just show how it improved my life so much,” Washington told ABC News’ Good Morning America of his desire to meet his donor.

Washington was diagnosed with kidney disease in 2014, a month after his father died from kidney complications, and had been searching for a donor ever since. By 2018, he was already at stage five of kidney disease.

The average wait time for a transplant in the United States is three to five years, but can be even longer depending on the region and donor availability, according to the National Kidney Foundation.

And according to the Organ Procurement and Transportation Network, there are 107,000 people on the waiting list to date, and only 14,000 transplants have been performed in 2021 alone.

Enter Sorlie, who told Good Morning America that she always knew she wanted to be an organ donor.

“I didn’t miss anything because of my health, and I want everybody to have that,” she said. “I want them to be too exhausted from chasing what matters to them.”

On May 9, 2019, Sorlie went to a University of Wisconsin transplant center to have the procedure done. Her kidney was sent by airplane — flights with organs have priority — and arrived the same day. Washington recieved her kidney just hours later.

Neither knew the other’s identity, but found each other through a happy accident.

In a Facebook group for kidney donors was a thread where some of the members put the date and location where they donated. When Sorlie posted “May 9, 2019,” at a “UW transplant center,” Washington’s best friend, Shonna Hersman, who also was a kidney donor in the group, reacted to the post with a shocked-face emoji.

Sorlie then went to Hersman’s Facebook account, where she saw a post dated the same day she donated, which said that the kidney for Washington had arrived and the transplant process was beginning. The two connected, and Hersman put Sorlie and Washington in contact with each other.

From the details they each had, they were able to confirm that Washington received Sorlie’s kidney. They became “fast friends” and planned to meet up in 2020, but had to put it on hold because of COVID-19.

“My husband and I were talking about going there,” Sorlie said. “And then Booker just sent a message and said, ‘What are you doing the first weekend of May?"”

Washington figured a sports game would be a great way to “break the ice” and would be extra special due to the game’s proximity to their two-year anniversary.

“We can watch the game or we can talk instead of just being kind of quiet. It’s easy to break the ice because you’re both rooting for your team,” he said.

Upon meeting, any worries they may have had disappeared.

“In my mind’s eye, he was going to be this very soft spoken, gentle person. And it turned out my intuition was spot on,” Sorlie said.

At the end of the third inning, Washington had a surprise for Sorlie. On the scoreboard at American Family Field was a message that read, “Happy transplant anniversary 143. With all my kidney, you’re my hero, Lisa Sorlie.”

Washington and Sorlie plan to keep in contact with each other, and want to have a tradition of doing something around their anniversary.