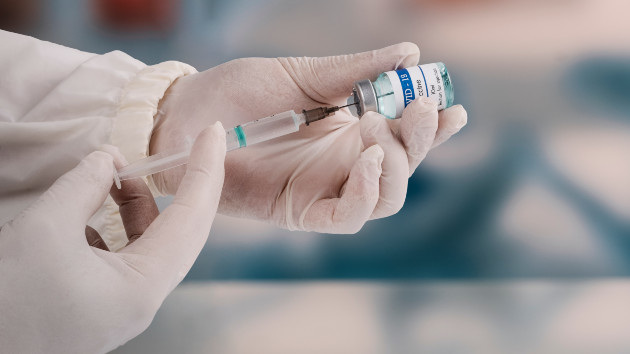 (NEW YORK) — With young under 5 now the only group not yet eligible for vaccination against COVID-19, many parents have been vocal about their frustration pertaining to the delayed authorization process and rollout.

However, a new KFF COVID-19 Vaccine Monitor survey has found that less than a fifth of parents with children under the age 5 — 18% — reported that they are eager to get their child vaccinated right away.

More than a third of parents — 38% — said that they plan to wait in order to see how the vaccine works for others, while 27% of parents reported that they will “definitely not” get their child vaccinated, and another 11% stating that they will only do so if required.

More than half of parents said they feel that they do not have enough information about the vaccines’ safety and efficacy for children under 5 years of age.

Pfizer reported on Tuesday that it now expects to analyze and submit its data for its three-dose pediatric vaccine by late May or early June, and the company anticipates that both the Food and Drug Administration and Centers for Disease Control and Prevention will consider the submission soon after.

“We have been working with urgency to generate data,” Mikael Dolsten, Pfizer’s chief scientific officer and president, Worldwide Research Development and Medical, said during an investors conference on Monday, adding that the company recognizes that “parents of younger children and health care providers have been waiting for an effective vaccine.”

Last week, Moderna announced it had submitted its request for the FDA to authorize its vaccine for children ages 6 months to 6 years.

“I think for these little children, they really represent an unmet medical need,” Paul Burton, chief medical officer for Moderna, told ABC News last week. “I would be hopeful that the review will go on quickly and rigorously — but if it’s approvable, this will be made available to these little children as quickly as possible.”

Burton said there will certainly be a “continued challenge ahead” as officials work to address hesitancy among parents.

Just under one-third of parents of 5- to 17-year-olds reported that they will “definitely not” get their child vaccinated, KFF found.

However, the poll found that the FDA’s delays in analyzing pediatric vaccine data have not been a deterrent for parents. Sixty-four percent of parents reported the delay has not affected their confidence in the safety of the vaccines for this age group, while 22% of parents said it has made them “more confident” in the vaccine’s safety for young children. Only 13% of parents reported the delay has made them “less confident.”

The continued push to convince parents to vaccinate their children comes amid a rise in pediatric COVID-19 infections and hospitalizations.

For the third consecutive week, COVID-19 infection rates among children in the U.S. have seen a notable increase, according to a new report released on Monday from the American Academy of Pediatrics and the Children’s Hospital Association.

Last week, 53,000 additional child COVID-19 cases were reported, an increase of about 61% from two weeks ago. Nevertheless, overall numbers remain significantly lower than during other parts of the pandemic. However, many Americans, who are taking at-home tests, are not submitting their results, and thus, experts said daily case totals are likely significantly higher than the numbers that are officially reported.

Hospital admissions are also up by about 21% in the last two weeks, with around 120 virus-positive children admitted to the hospital each day.

Vaccine hesitancy has not been limited just to parents, as the push back against the vaccine has plagued the rollout since its early days. Nationally, 54.6 million eligible Americans remain unvaccinated.

In recent months, the drive for people to get their booster shot has also markedly slowed, as those most eager to get the shot have already been vaccinated.

KFF found there is also a large gap by partisanship, with Democrats more than twice as likely as Republicans to report being vaccinated and boosted.

For those who have yet to receive a booster, 56% of respondents said they believe that they already have enough protection from either their initial vaccine doses or from a previous COVID-19 infection. Others reported that they simply do not want to get it, while 39% of people said they believe boosters are ineffective because some vaccinated people are still getting infected.