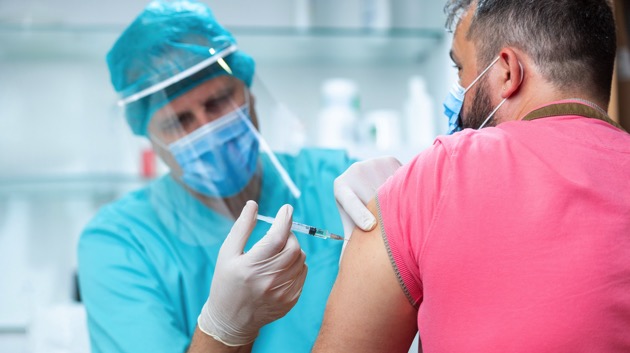 (NEW YORK) — In the midst of a delta variant surge, a new study finds that giving a booster dose of the Johnson & Johnson shot six months after primary vaccination results in a nine-fold increase of a crucial antibody response, according to a company press release.

Meanwhile, a prior study found that people vaccinated with the Johnson & Johnson vaccine still had a durable immune response at least eight months later, even without a booster.

Collectively, the findings could help inform the U.S. government’s recommendations about booster shots for the 14 million people who received the single-shot Johnson & Johnson vaccine.

“This data will likely be reviewed by federal health authorities in their discussions about recommending boosters,” Barouch said.

Scientists said emerging evidence suggests vaccine efficacy for all three vaccines wanes slowly over time. And in the face of the highly transmissible delta variant, more frequent mild breakthrough infections have been reported, but so far, evidence indicates that vaccines are still dramatically reducing the risk of hospitalization and death.

“We are prepared to offer booster shots for all Americans beginning the week of Sept. 20 and starting eight months after an individual’s second dose,” said Centers for Disease Control and Prevention Director Rochelle Walensky, speaking at a press conference Wednesday.

But the Biden administration’s Wednesday announcement on booster doses only included people who received the Pfizer or Moderna shots, omitting a specific recommendation for those who received Johnson & Johnson. Walensky said data on Johnson & Johnson could be expected “in the next few weeks” and that “with those data in hand, we will keep the public informed with a timely plan for J&J booster shots as well.”

The new data, which still has only been described in a press release and has not yet been peer-reviewed, will likely help inform recommendations about if, and when, booster doses will be needed for those who got the Johnson & Johnson shot.