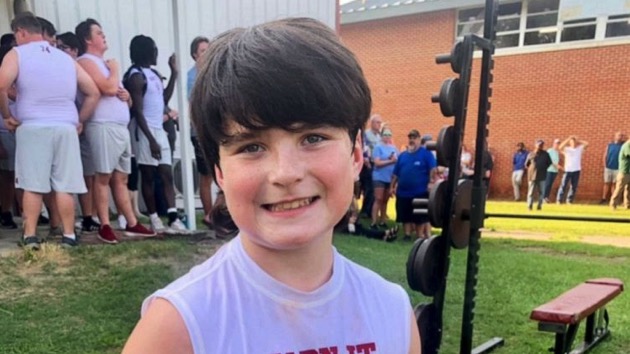 (CHILTON COUNTY, Ala.) — An Alabama family’s life was turned upside down when their 12-year-old son, a healthy, strong athlete, caught COVID-19 and landed in the hospital struggling to breathe.

Brody Barnett, a seventh grader from Chilton County, and his family are speaking out to warn the public of the dangers of the delta variant.

His mother, GeriLynn Vowell, told ABC News that her son tested positive on Aug. 6 and suffered extreme symptoms, including coughing and trouble breathing, within a day.

“He’s told his friends, ‘This is the worst that I’ve ever been sick,"” she said.

He said being in the hospital was a “scary experience,” adding, “It ain’t nothing to joke with,” to local ABC Birmingham affiliate WBMA-LD.

Brody, who was not vaccinated, was first exposed at the beginning of last week after going to a friend’s home where someone later tested positive for the virus. After hearing news of that positive result his family bought at-home COVID-19 kits.

“I tested Brody and his test popped up positive immediately. Then we went to an actual testing site and it was the same result,” Vowell said.

Vowell explained that she had tested negative for the COVID-19 test but positive for antibodies.

Health experts recommend people get vaccinated even if they have been exposed to the virus because the vaccines are known to provide more durable protection, including against the delta variant. A study released Aug. 6 by the Centers for Disease Control and Prevention found that people who were unvaccinated were more than twice as likely to be reinfected compared to people who were vaccinated.

The night Brody tested positive he got a runny nose and started coughing. The next day it progressed to the point that he couldn’t breathe and felt pain in his ribcage.

“He was like, ‘I cannot breathe, I cannot take a breath,"” she said. “He couldn’t raise his arms over his head and take a breath.”

Days later she took him to Children’s of Alabama hospital in Birmingham, where he spent one night. A doctor told them Brody had COVID pneumonia.

When COVID-19 pneumonia occurs it can be severe and the lungs are most affected. Airsacs in the lunges fill with fluid and limit their ability to take in oxygen, resulting in shortness of breath and cough, according to Johns Hopkins Medicine.

“It was scary. The doctors said there’s nothing we can do other than Tylenol or Motrin to treat symptoms,” Vowell said, noting the doctor said his symptoms were consistent with the delta variant.

He was treated in the COVID wing where there “were probably a dozen kids or more” being treated, she recalled.

Today, Brody is at home recuperating and is slowly recovering.

“Our nights are still pretty rough. I feel like he’s feeling a little better now, we’re on Day 7. As far as walking outside, he gets winded very easily, his breathing isn’t where it should be and he still has lots of big coughing spells,” Vowell said.

Brody’s struggle with the virus has left the family shaken.

“It has scared him a lot. Our COVID units in our area had shut down pretty much and we didn’t hear about it this summer, we didn’t worry about the virus as much but now I think it’s definitely scared him to the point that he feels he is definitely more leery of it,” his mother said.

Brody and his family are speaking up to warn people that kids too can suffer greatly from the virus.

“Kids do get sick and [the virus] is real. We’re not out to condemn or condone or any of the political side of it,” Vowell said. “I just want to make other mommas and parents aware that it is real for kids and kids do get sick and it’s a scary thing when they do.”

COVID-19 infections among children has become a growing concern in the U.S.

Nearly 94,000 children’s virus cases were recorded for the week ending Aug. 5, which accounted for roughly 15% of all new cases reported across the nation, according to data from the American Academy of Pediatrics and the Children’s Hospital Association. It’s a major jump from the week prior’s when 39,000 new child cases were reported.

As of Thursday there are 22 children at the Children’s of Alabama in Birmingham hospitalized with COVID-19.