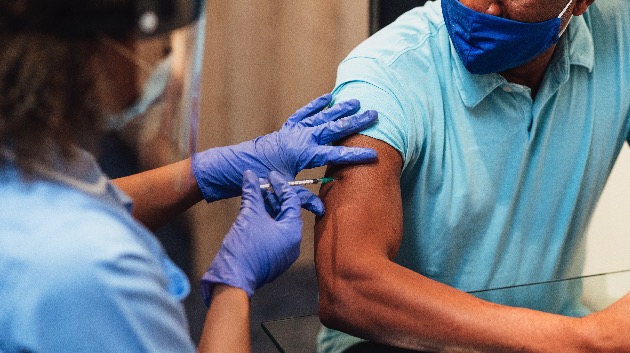 It’s an effort that has been noticed in the state, which has one of the lowest vaccination rates in the country and where several counties have fewer than 30% of their population inoculated, state data shows.

“We have spoken to some of our other counties in Wyoming because they wanted to know what we were doing,” Rachael Wheeler, the public health response coordinator at the Teton County Health Department, told ABC News.

As the highly transmissible delta variant has quickly spreads throughout the United States — now making up over 80% of new cases — regions with high vaccination rates are expected to fare better, medical experts say.

ABC News spoke to Wheeler and officials in two other counties leading their states in COVID-19 vaccinations about their campaigns, what they’ve done and where they go from here.

McKinley County, which includes part of the Navajo Nation reservation, was one of the hardest-hit regions in New Mexico early in the pandemic.

For Adam Berry, emergency manager for the county, that may have helped drive vaccinations to where, as of Monday, over 94% of residents ages 18 and up have received at least one dose, according to the latest state health department data. Statewide, that number is 72.2%.

“The spring of 2020 was our first wave; we had a pretty good surge,” Berry said. “We had the highest case number in the state, especially per capita, for several weeks and months, before things tapered off late summer.”

There was a longer, second surge in the winter that filled Gallup hospitals and mortuaries to capacity, he said.

“There’s very few people in the county that don’t know at least one person that was sick, if they weren’t sick themselves,” he said. “Many people know one or more people that unfortunately died due to COVID-19. So I think it’s very personal for a lot of people.”

Berry said there was a little hesitancy in the beginning, but that “it didn’t take very long at all for a lot of people to start lining up to get the vaccine.” Being able to protect themselves and their family, as well as safely see people they had not seen in a while, were big motivators, he said.

“It was definitely a big community effort. Everybody does their part to try to get as many people vaccinated as possible,” said Berry, a volunteer paramedic who also helped administer vaccines when clinics were short-staffed.

One thing that worked to the county’s advantage in administering the vaccine is having a significant percentage of the county served by the Indian Health Service, he said. Nearly 80% of the county’s residents are Native American, according to the U.S. Census.

“A lot of other counties in New Mexico are dependent on local health care systems and private physicians to vaccinate the bulk of their populations,” he said. “We were fortunate in that aspect that we have a large presence of Indian Health Service facilities to help take care of that population, which allowed for vaccines to come in directly from the federal government to that site.”

The Indian Health Service held drive-thru events at the Fire Rock Casino in Church Rock and did outreach to the Navajo Nation “to make it more convenient” to get the vaccine, Berry said.

The county has lately been focused on bringing people back for their second dose if needed, as well as vaccination efforts in those ages 12 to 16.

Since May 24, the county has reported only three COVID-19 deaths, and the seven-day average of new cases is three, down from a peak of 109 in mid-November, state data shows.

There’s still a lot of mask-wearing, though life has started to “look a little more normal,” Berry said. “We’ve come a long way in the last year.”

There’s stiff competition to be the top county for vaccinations in Vermont, which has the highest vaccination rate in the country.

At the moment, Lamoille County holds that distinction, with over 85% of residents ages 12 and up having received at least one dose, according to state data.

“When we saw those numbers we were very happy about it,” Aaron French, director of the Morrisville Office of Local Health in Lamoille County, told ABC News. “Every county’s working really hard.”

Part of that effort has included reaching Lamoille County’s more rural residents, who may be less inclined to drive to a vaccination clinic out of town.

“I grew up in one of those small towns, and I said, ‘Why don’t we talk to the town … and set something up, and if we only get five people, we’ll get five people,"” French said.

On a recent weekend, the office brought nurses to two towns and was able to vaccinate around 10 people.

“We were happy with that,” French said. “And we’ll continue to do that.”

Health officials have also connected with local churches, schools, manufacturers and ski resorts as part of the vaccination efforts to reach the community and workforce.

As COVID-19 cases rise throughout the United States, Vermont officials said this week they have seen a small increase in the state, likely due to the delta variant, but community spread remains low due to the high vaccination rates.

“They needed to hear from people that they could trust, and I think those local people were their local doctors and their commissioner of public health, who’s a physician, and their governor,” he said. “We have a number of federally qualified health care centers around here, and those physicians and nurse practitioners are very well-trusted, so their messaging out to the community and their patients were really important and helpful.”

Lamoille County’s lowest vaccination rates are among those ages 18 to 29, with over 58% of that population vaccinated, state data shows. That is one area the county is focusing on, French said.

“There’s plenty of opportunity and we’re just going to keep plugging away at it,” French said. “I do think we can get higher than that.”

There has been a partisan divide in COVID-19 vaccinations, with Democrats more likely to report getting the vaccine than Republicans. Teton County is an outlier in Wyoming as a “blue dot in a red state,” though Wheeler doesn’t think that “can account for everything.”

One major factor that helped Teton County achieve its vaccination rate — which is the highest in the state, and higher than the national average — started with the logistics of the rollout itself.

“We were very easily able to ramp up and hire a lot of additional vaccine staff when our demand was high,” Wheeler said.

That meant hiring anyone from nurses to administer the vaccines to staff to help manage the different schedules. The county also had a lot of volunteer help at vaccine clinics, from checking people in to observing for emergency response, she said.

Teton County was also one of a handful of counties in Wyoming that had an ultra-cold freezer needed at first to store the Pfizer vaccine, the first to be issued an emergency use authorization.

“That was really helpful early on to be able to accept all different types of vaccines that were approved under the EUA at that time,” Wheeler said.

When the county expanded its eligibility to schools and child care providers, the health department held special clinics on the weekends to accommodate them. “That seemed very successful, and they were very appreciative of that,” Wheeler said.

Once students were eligible, the health department held an in-school vaccine clinic before the school year let out that reached over 500 students, Wheeler said.

To reach the broader community, the health department repurposed a public transit system bus into a mobile vaccine clinic, which has been used to bring doses to worksites, like the county’s trash transfer station, and, lately, parks.

“Our goal is to reduce any barriers that there might be for people to get the vaccine,” Wheeler said.

Beyond vaccine access, the county hired an agency to help with its messaging around the COVID-19 vaccine. “They helped us have a more focused campaign that was consistent and looked really professional,” Wheeler said.

Currently, the health department is holding a “Shots for Swag” campaign, in which residents who have received at least one dose of the vaccine can win prizes.

Through the ad agency, the health department also filmed a video featuring local doctors answering common questions about the vaccine, such as around variants, fertility and pregnancy, that “put a more local perspective to it,” Wheeler said.

The health department also partnered with several community nonprofits, including Voices JH, which helped reach immigrants in the Latino and Eastern European communities in the county with resources on vaccination.

Local health officials are anticipating renewed demand for the vaccine as new age ranges become eligible, and possibly when a vaccine has full FDA approval.

For now, they’re planning to bring the mobile vaccine clinic to events throughout the summer and remind employers about the service. From July 1 to July 15, the county reported 31 new COVID-19 cases, 26 of which were in unvaccinated people and included workplace “clusters,” the health department said this week.

“We’re still messaging to everyone that the best defense is getting vaccinated,” Wheeler said. “It’s how you’re going to protect not only yourself, but your family, friends, co-workers, neighbors, community members.”