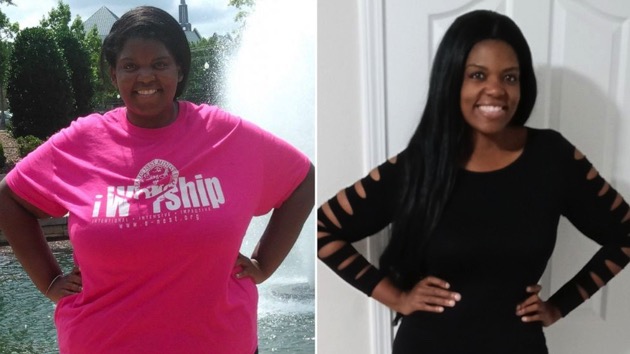 (STATESVILLE, N.C.) — A North Carolina mom is celebrating after losing over 200 pounds, half of her original weight.

Tiesha Robinson, of Statesville, North Carolina, said she lost the weight even after struggling with it for her entire life.

“I can’t think back of when I haven’t had to lose weight or when I wasn’t trying to lose weight,” Robinson, 35, told Good Morning America. “Obesity runs in my family and then also I made a lot of wrong food choices.”

“I didn’t want my son to have to go through that pain again if I could prevent it,” she said. “So that was kind of my motivation to save myself so that I could be here for my son.”

Speaking of her aunt’s death in 2016, Robinson said: “My aunt was kind of like everyone’s hero, like the backbone, so to watch her struggle to live was a turning point. It really made me realize that even though I’m strong and I try to be here for everyone, I have to show up for myself because if I’m not here, then I can’t help anyone.”

In 2017, one year after her aunt’s death, Robinson said she hit her highest weight of 416 pounds.

“I didn’t know that I would be as successful as I am, but I knew I had to try,” she said of WW. “I knew I couldn’t give up because if I gave up on me, it would be like I’m giving up on my son, and that wasn’t an option, so I just had to throw away all the excuses and all the distractions.”

Robinson said WW’s method of tracking food showed her how to balance what she was eating and “now just indulge in everything that I wanted in one day.”

“I was able to balance healthy choices and just learn a new healthy lifestyle,” she said. “It saved my life by just learning how to eat healthy, be healthy, stay active.”

In the past two years, Robinson said she has lost 208 pounds and changed her life. Her weight loss transformation is featured in People magazine’s 2021 “Half Their Size” issue, available on newsstands now.

She said she is now more “mindful” and in control of her diet, and has taken up hobbies like Zumba, walking and writing poetry that she turns to instead of food.

Robinson said she and her son, now 15, joined a gym together just before the start of the coronavirus pandemic, but she has since learned to love working out at home, which she said helps her eliminate any excuses.

“I learned to exercise at home and that way I don’t have no excuse,” she said, noting she takes Zumba classes on YouTube or plays a dance game on an Xbox. “If it’s too late, I’m in my house so I can exercise. If it’s early and I have energy, I have the opportunity to exercise.”

Through her weight-loss journey, Robinson said she has learned to “set goals, not limits,” which is the advice she gives to others.

Robinson said she has also learned the importance of celebrating her own accomplishments on her weight-loss journey, instead of waiting for other people’s approval.

Her most important advice, she said, is to just start out on the journey, saying, “In order to finish, you have to start, so just get started and keep going.”

Nearly one in four Flint residents may have PTSD after water crisis, study finds