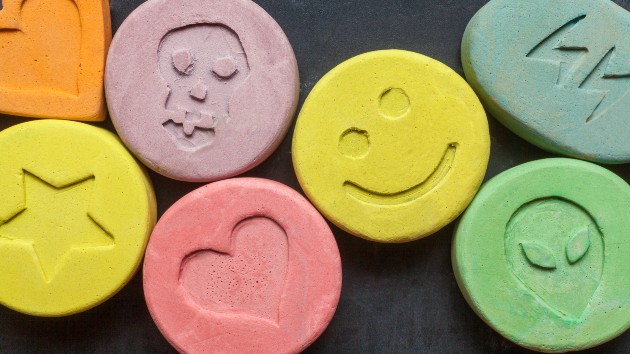 (NEW YORK) — MDMA, also known as “ecstasy” or “Molly,” has traditionally been thought of as a party drug. But now, researchers are finding promising results for MDMA as a potential treatment for post-traumatic stress disorder.

A recent phase 3 clinical trial found that MDMA, in combination with talk therapy, was significantly more effective than talk therapy alone, according to results published in Nature Medicine.

“We had tremendous statistical significance. We had really great effect sizes, and we had a great safety record,” said Rick Doblin, Ph.D., founder and executive director of the Multidisciplinary Association for Psychedelic Studies, in a recent interview with ABC News.

But some experts say it’s too soon to recommend MDMA as a treatment for PTSD even with the accompaniment of monitoring through therapy.

“While it’s exciting, we need to be cautious,” Dr. Panagiota Korenis, a psychiatrist at the BronxCare Health System, said.

Some experts say the relatively small trial — only 90 volunteers — may not have included the full range of people who experience PTSD.

“I don’t think we’re able to make conclusions about it yet for all populations that have PTSD, especially people with addictions or other comorbid psychiatric conditions,” Korenis said.

Millions of Americans suffer from PTSD, and MDMA-assisted therapy would present a completely new option for treating the disorder. Current options, such as antidepressants and therapy, are effective for some, but leave 40-60% of those with PTSD without much of a response, Doblin’s group reported.

However, Doblin and his colleagues at MAPS are fighting an uphill battle, as MDMA is still listed as a Schedule 1 (illegal) drug, defined as having “no medical benefit” under the Controlled Substances Act. The drug, which was developed by German chemists in 1912, became popularized as a party drug in the 1980s. It became associated with rave culture and electronic music events and was soon listed as Schedule 1 due to “high abuse potential.”

But Doblin argues MDMA-assisted therapy could be a path to healing for some.

“What MDMA does is ideal for treating PTSD: reducing the fear of painful memories, helping process emotions, opening up the mind-body connection,” Doblin said.

And, indeed, the study reported no adverse events of abuse potential, suicidality or heart problems in those who received MDMA. The only side effects noted in the MDMA-assisted therapy group were increases in pulse and blood pressure, muscle tightness, decreased appetite, nausea, sweating and feeling cold — all of which were temporary.

MAPS hopes that this phase 3 clinical trial will help facilitate FDA approval for MDMA in 2023. In the meantime, MAPS is moving forward with a second phase 3 clinical trial and plans to conduct additional studies that will explore MDMA-assisted therapy as a treatment for other mental health conditions or to be used in different contexts, like couples therapy or group therapy.

While some remain skeptical about the new treatment, many experts appear to be interested in what psychedelics can bring to PTSD treatment and the field of psychiatry in general.

“We’re always looking for the magic bullet,” Korenis said. Given the results of the new trial, “I’d say we should be cautiously optimistic. This may be another tool that we can use when we’re working with patients who experience trauma.”

All prescription medications in the United States require full scrutiny and approval by the Food and Drug Administration before becoming available outside of clinical trials. MDMA is illegal for recreational use in the U.S.

But Doblin is hoping to see the finish line of his lifelong journey to bring psychedelic medicines from criminal to mainstream.

“We’re right at heartbreak hill. We’ve gotten most of it done, but the hardest parts are still ahead,” he said. If all goes well, “we’ve got a very good chance of making MDMA-assisted therapy for PTSD into a prescription medicine.”