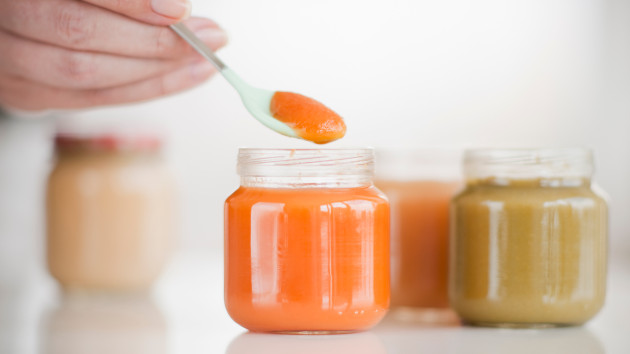 (NEW YORK) — Feeding a baby is something a parent must do multiple times a day, every day, and yet it can be one of the most confusing and stressful things that any parent does.

Before the recent headlines of a baby formula shortage, parents feeding their child baby food may have seen headlines about heavy toxic metals being present in some popular baby foods on the market.

Homemade baby food could potentially pose the same problems as store-bought when it comes to heavy metals, according to one advocacy group’s analysis that has not been vetted through the normal scientific review process.

But making the issue even more complicated is that a safe level of heavy metals in foods for children has not yet been established, according to Dr. Stephanie Widmer, an ABC News medical contributor, board-certified emergency medicine physician and medical toxicologist.

Widmer said research into heavy metals in baby foods is in the early stages, and that the Food and Drug Administration and other government agencies are working on initiatives to test the levels of heavy metals and establish safe levels.

In the meantime, she acknowledged it is a confusing and sometimes scary time for parents.

“This can be a lot of overwhelming information for parents,” said Widmer, also a mother of two children, ages 3 and 5. “There are just a whole lot of unknowns.”

What to know about heavy metals in baby foods

Exposure to toxic heavy metals poses a specific risk to toddlers and infants because they absorb more than adults and their brains are still developing, according to the National Institutes of Health.

Even low levels of lead in blood may go on to affect IQ, a child’s ability to pay attention and academic achievement, according to the American Academy of Pediatrics.

“The concern is not that the amount that’s in baby foods or the amount that babies are consuming is going to make them acutely sick,” Widmer said. “The concern is long-term effects on neurodevelopment, brain function, possibly the long-term risk of cancer down the road, and it’s really difficult to establish what levels are increasing your risk for danger.”

Experts, including Widmer, point out that heavy metals are naturally occurring and are found in all of our foods, which makes it hard to tell parents a specific type or brand of baby food to avoid.

“Rattling off a list of which ones are safe, which ones are not would be probably impossible,” Widmer said. “Because everything really out there has some level of heavy metals in it. It’s in the soil and things that grow in the soil.”

In order to suffer detrimental effects, a person would have to be exposed to toxic heavy metals for a prolonged period of time. Periodic ingestion of the levels found in baby food products would generally not be considered dangerous.

Diagnosing heavy metal poisoning can also be difficult and symptoms may be easy to miss. Those symptoms include things ranging from dehydration and abdominal pain to changes in behavior, weakened bones, anemia, numbness and weakness, and edema, according to the NIH.

The American Academy of Pediatrics recommends screening for elevated lead levels in children 9 to 12 months old, and again around age 2.

Therapies to help children who have been overexposed to heavy metals are available, experts say.

There are also steps that parents can take to limit their child’s exposure to heavy metals, according to Widmer.

What parents can do

Here are four things Widmer said she did when her two children were in their baby food stages.

“I made sure there was variability in their diet,” Widmer said. “Heavy metals are in everything, so if you’re not eating the same thing, the same food group every day, you are decreasing your risk.”

Widmer said varying her kids’ diets included switching back and forth between feeding them homemade baby food and store-bought baby food, as well as frequently rotating the types of foods they were eating.

“Bananas one day, baby spinach another day and just making sure that variability is there,” she said. “Not getting the same repeat exposure to the same food and whatever compounds are in that food is the best thing that parents can do.”

“Rice tends to have a lot of high levels of heavy metals,” Widmer said. “So avoiding foods and cereals that are rice-based is probably best practice.”

In addition to rice, Widmer said she also recommends trying to limit foods that grow in the ground, like carrots, potatoes and sweet potatoes, as they can be exposed to heavy metals in the soil.

Widmer said parents shouldn’t skip those foods entirely, but rather ensure they are not a daily staple in a baby’s diet.

4. I washed foods when I made homemade baby food.

“If you are making baby food at home, really washing the foods beforehand helps,” she said. “If you are going to use a rice-based cereal or rice-based food, really soaking the rice and washing it with boiling water after would help.”

Widmer also recommends that parents wash their baby’s hands before they eat, too.