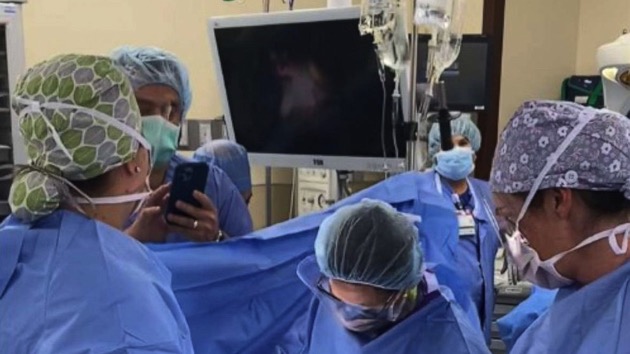 (GRAND RAPIDS, Mich.) — A hospital in Michigan is giving birthing parents a new way to stay connected during a cesarean section delivery.

Spectrum Health Butterworth, a hospital in Grand Rapids, Michigan, allows parents to watch the birth on a monitor display next to the operating table.

That’s how Amanda Koop got the first glimpse of her son, Charlie, when she gave birth to him at Spectrum Health Butterworth on Nov. 24, 2021.

“They turned the camera toward me right when they were going to pull him out,” Koop told “Good Morning America.” So, similar to a vaginal birth, I saw him come up and out, which was great.”

Koop, 36, had an unplanned C-section with Charlie, her first child.

She said that once it was decided she would be undergoing a C-section, a nurse asked her if she wanted the option to watch the delivery, which she otherwise would have not been able to witness. As is typical with a C-section, Spectrum Health Butterworth uses a drape to separate the expectant parents from the surgical procedure.

“I wanted to use the camera, because it could be a once-in-a-lifetime opportunity, and I didn’t want to miss those moments, his first breath, that can be something that sometimes you could miss in a C-section,” said Koop, who added that the camera also made the C-section “less anxiety-provoking.”

“For me to be able to see him in those moments, OK, he’s out and he looks great, that was extremely calming and reassuring,” she said. “There’s a lot happening in those [operating rooms]. They’re loud and they’re bright, and I could kind of focus right on him, which was really nice.”

The camera and monitor system is the same one that doctors themselves use in other surgical procedures, such as laparoscopic surgeries, according to Dr. Cheryl Wolfe, a practicing, board-certified OBGYN and vice president and department chief of women’s health at Spectrum Health, a Michigan-based health system.

Wolfe said Spectrum Health Butterworth, which delivers around 7,500 babies annually, is the only hospital she knows of in the country that has applied surgical camera technology to C-sections.

“We’re using this technology that’s been around but using it in a different way, and that is not the norm across the country,” she said. “I’m hoping that there will be more hospitals and labor and delivery units that opt to put this in place. I think their patients will be asking for it.”

Nearly 32% of all births in the United States are done by C-section, according to data from the Centers for Disease Control and Prevention.

Since the majority of C-sections are not expected, it can often feel startling for expectant parents to go from the comfort of the labor and delivery room to the sterility of the operating room, according to Wolfe.

She said the goal of giving parents the option to watch the delivery is to “flip the script” and make it a more personal experience.

“Anytime you have something unplanned, especially around something as momentous as having your child, you’re going to have some trepidation about, ‘Oh, now I need a C-section. Now I need surgery. What does that mean?"” Wolfe said. “Now you’re given an option where you can actually … watch the process, something previously you were unable to do because the technology wasn’t in place.”

The medical team is able to move the monitor so that parents can watch what they want of the delivery, as was the case during Koop’s C-section.

“I did not want to see the initial incision and getting down to the baby, so I just saw those parts that I thought were important,” Koop said, adding that the monitor’s location and flexibility also gave her husband the chance to stay by her side while choosing what he wanted to see.

“I think it can be kind of scary for people, what am I going to see, but the team does an amazing job of kind of blocking things that you don’t need to see and really focusing on that little baby,” she said. “I just thought it made such a difference in my delivery. I didn’t miss a thing.”