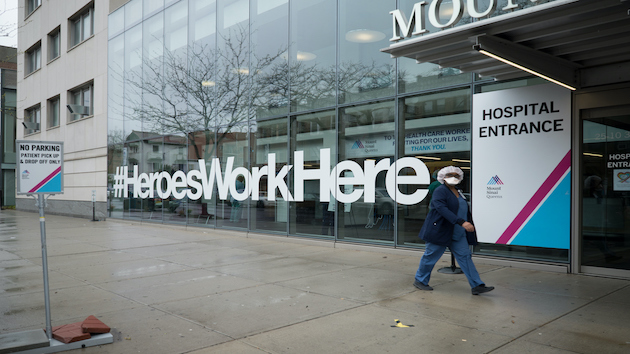 (NEW YORK) — More than a year after New York City ground to a halt during the height of its COVID-19 outbreak, bars and restaurants are open, beaches are crowded and kids are headed back to school in person come fall.

“Here in New York City, we have hit the lowest level of COVID today since the pandemic began,” Mayor Bill de Blasio said during a Thursday news conference. By every metric, including a decline in new COVID cases, test positivity rates, and hospitalizations over the past several weeks, New York’s outbreak is receding. Earlier this week, the city logged a day with zero deaths from the virus and on Thursday reported a positivity rate of 0.8%, the lowest level since the city started reporting the metric more than a year ago. While a day with no deaths is a single data point and data backlogs are common after weekends and holiday, the low numbers were encouraging.

“It’s stunning how much progress has been made,” de Blasio said. A less obvious development? Many of the city’s doctors — at the center of the one-time ground zero of the outbreak — are smiling again, although there are formidable challenges ahead such as keeping the virus at bay and the mental health of those who were traumatized by front-line medical work.

“I’m just ecstatic to have all of that behind us,” said Dr. Craig Spencer, director of global health in emergency medicine at Columbia University Medical Center. “It’s this beautiful alignment of so much hope and optimism that caps off a year of the exact opposite.”

As vaccinations rise, a burden lifted for doctors

While New York City saw several waves of COVID-19 infections over the course of the pandemic, the situation never approached the crushing level of hospitalizations and deaths that took place during the initial spring spike. “We’ve had ebbs and flows that felt tiny in comparison to that,” Spencer said. He described his work since the first spike as straightforward because of what he and his colleagues endured during the first months of the outbreak.

In mid-December, Spencer got vaccinated and “started immediately feeling safer,” he said. That relief has become even more pronounced in recent weeks, as New Yorkers continued to get vaccinated. As of Thursday, 52% of New York City residents had received at least one dose of the vaccine and 44% were fully vaccinated, according to the city’s health department.

“In terms of patient volume, it’s been a dramatic change from what it was last year,” said Dr. Syra Madad, senior director of the special pathogens program at the city’s hospital system, NYC Health + Hospitals. She described Memorial Day weekend, the first holiday in the U.S. following the lifted mask mandate, as “a breath of fresh air, both literally and figuratively.”

“We feel very, very differently than we did a year ago,” Madad added.

Last week, Spencer worked four back-to-back shifts in the emergency room without a single COVID-19 case. The patients he has seen in the past month have had mild COVID-19 infections, with a few severe cases among people who haven’t been vaccinated.

For Dr. Robert Glatter, an emergency medicine physician at Lenox Hill Hospital in Manhattan, it all comes back to vaccination. He’s continued to see COVID-19 patients on recent shifts with shortness of breath and coughs, but they’re nowhere near as ill as the those he saw last year and don’t require intubation. “These patients are almost all unvaccinated.”

“That’s really the take-home message,” he added. “The reason we are here at this point is because vaccinations have been effective. The U.S. basically failed to contain the virus until the vaccines arrived on the scene.”

Doctors are optimistic, but scars from last year linger

While there’s been a dramatic shift in day-to-day life at the hospital compared to last spring, when “every day was like a rolling mass casualty event,” according to Glatter, the mental health and emotional toll of that time has been harder to shake.

“It’s lifted somewhat, but it still hasn’t gone away,” Glatter said of sense of uncertainty that permeated last year. “There’s lingering anxiety and mental health issues, including depression and post-traumatic stress from what everyone went through a year ago. That heightened sense of anxiety and fear is pervasive.”

Spencer described treating a colleague last April who was sick with COVID-19 and having to turn off ventilators in the emergency room when patients had no chance of surviving, something he’d never done before. Two colleagues died, one who had come out of retirement to work on the front lines during the pandemic, another by suicide.

“This will scar a generation of health care workers, especially here in New York City.”

Madad seemed to agree. Health care workers, including doctors, nurses, medical assistants, front desk staff, workers who clean the ER, and others, had a role to play during the pandemic, she explained. “Now that everybody has some room to catch their breath and reflect on what transpired over the last the year and a half, you’re seeing that the silent pandemic of mental health creep up,” Madad said.

“I wouldn’t be surprised if we see a higher volume of individuals seeking mental health support or higher volumes of emergency department visits because of the psychological impact. Now is the time people are realizing what has happened.”

For Spencer, treating non-COVID patients again brings up mixed feelings. “It’s wonderful, but it’s also sad. We’re in the same spaces where we basically witnessed the apocalypse,” he said. Between Feb. 29 and June 1, 2020, at least 54,211 New York City residents were hospitalized with COVID-19 and 18,679 died of the virus, according to the Centers for Disease Control and Prevention.

He still thinks about the people who died and those who weren’t able to get care.

“But I think this overwhelming sense of optimism is a really nice mental health balance to all of that.”

‘There’s still a lot of work to do’

All three doctors agree that while New York has turned a page in the pandemic, it doesn’t mean the city’s, much less the world’s, COVID story is over.

“You’re now dealing with a massive city, state, national, international vaccination rollout, which has its own strengths and challenges,” Madad said. “Trying to get everybody vaccinated is a historic moment in the history of infectious disease. From that standpoint, there’s still a lot of work to do.”

We need to put just as much effort into the current recovery phase as we put into the response phase, she stressed, and get as many people vaccinated as possible to preventing surges in COVID-19 cases.

Glatter urged the public not let its guard down. “There are going to be localized outbreaks in the U.S., especially in areas where relatively few people are vaccinated,” he said. “It’s still there,” he added, noting that coronavirus will likely become endemic and stay with the U.S. for years. “We’re going to have to always have precautions.”

Despite those caveats, and despite the probability that cases will rise again in fall and winter when people head indoors, COVID-19 won’t be “disruptive or completely overwhelming like it has been,” Spencer said.

Seeing COVID-19 patients for a year has given doctors a degree of confidence they lacked when the virus was new and when they were forced to treat patients through trial and error. Now, Spencer thinks COVID-19 screening and treatment will be built into daily practice, alongside the other conditions he treats in the ER, like ankle fractures, appendicitis, heart attacks and strokes.

“We know what it looks like. We know how to manage it,” Spencer said. “It’s a lot less daunting and scary than it was a year ago.”