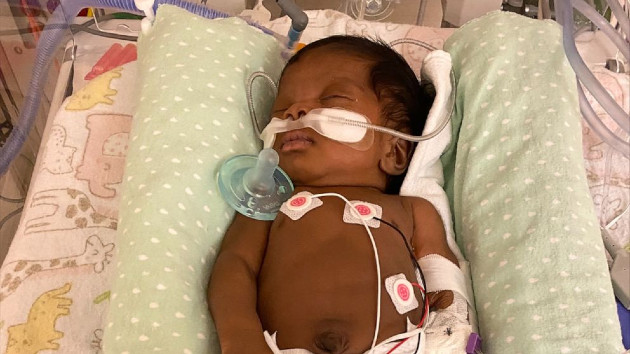 (NEW YORK) — Two quick-thinking Kansas City, Missouri, police officers are being hailed as heroes after they sprang into action and saved a newborn baby’s life.

Officers Richard DuChaine and Charles Owen responded to a call Thursday about a baby who was not breathing, according to Kansas City police.

DuChaine immediately began chest compressions and then back thrusts on the small baby girl. By the time EMS providers arrived, Kamiya was breathing again.

“We always had that fear in the back of our head that, ‘Is what we’re doing enough? Is it going to be enough to bring her back?"” DuChaine told ABC News’ Good Morning America. “Obviously, once we are able to bring her back, that was a huge sigh of relief.”

Kamiya was rushed to the hospital where her mother said she was diagnosed with respiratory syncytial virus, or RSV, an illness that is surging to record levels among children across the country.

Each year in the United States, an estimated 58,000 to 80,000 children younger than 5 years old are hospitalized due to RSV infection, according to the Centers for Disease Control and Prevention.

Most children recover in a week or two, but RSV can be serious, especially for infants and the elderly.

The baby’s mother, Tajanea Allen, said Kamiya is back home and that the two men are her heroes.

DuChaine and Owen said they were just fulfilling their duty.

DuChaine added, “We don’t do this job to be called heroes. We do this job to preserve life and … just overall, just protecting the people of the city.”