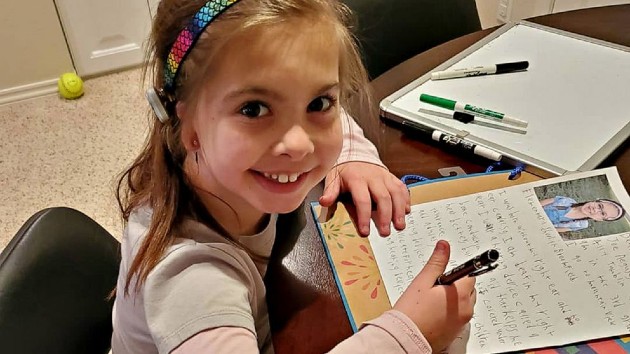 (NEW YORK) — Legislation being considered in Congress that would require insurance providers to cover hearing aid devices is the brainchild of a now 11-year-old girl.

Ally Tumblin, now a fifth-grade student in Colorado, was 9 years old and in third grade when she received a homework assignment to do something to better her community, with one option being to write a letter to an elected official about an important cause.

“She looked at me and was like, ‘Mom, my BAHA,"” said Ally’s mother, Melissa Tumblin. “And that was the start of it.”

A BAHA is a bone-anchored hearing system, an implantable device that treats hearing loss.

Ally used a BAHA because she was born with both microtia, a rare condition that causes missing or underdeveloped ears, and aural atresia, the absence of the ear canal, according to Children’s Hospital of Chicago.

In Ally’s case, she was born without a right ear or right ear canal, according to Tumblin.

“She was born via C-section and I remember my husband coming over to me teary-eyed and he said, ‘I think there’s something wrong with her ear,"” she said. “I immediately saw her sweet little smile and her face and I was so happy, but we were kind of shocked and our story is the same story as so many families.”

Tumblin said she and her husband felt “alone” after Ally’s birth without many resources to support their daughter.

When they discovered, through Tumblin’s own research, that Ally could get a BAHA device, they then found out the device was not covered at all by their insurance.

When Ally was around 1, the Tumblins purchased a BAHA for her out of their own pocket so that she wouldn’t face any further speech and hearing delays.

BAHA devices range in price from $5,000 to $12,000 each and need to be upgraded or replaced every five years due to new technology, according to Tumblin.

“I will never forget the day she got [a BAHA],” said Tumblin. “The audiologist put the device on Ally and she whispered Ally’s name behind her ear. Ally’s face lit up and she whipped her head around and looked at us and we both started crying tears of joy.”

“I remember someone in the audiologist’s office told me, ‘It’s as if she’s been re-engaged with her environment, like someone turned on a switch,"” she recalled.

Once Ally received her BAHA, Tumblin set out to help other families obtain insurance coverage where possible and also to ask lawmakers to make it a national mandate that insurance companies cover devices like BAHAs and cochlear implants.

“Our types of devices are constantly left out of coverage,” said Tumblin, who founded the nonprofit organization Ear Community. “It feels discriminatory.”

When Ally wrote her letter to her local representative, Rep. Joe Neguse, D-Colo., she asked him to mandate insurance coverage for devices like hers.

“There are thousands of children and adults just like me who need this device to hear better,” she wrote in the 2019 letter.

Less than three months later, Neguse became the lead sponsor of “Ally’s Act,” legislation that would amend current law to “require coverage of hearing devices and systems in certain private health insurance plans,” according to the text of the legislation.

Neguse reintroduced the legislation last month in the U.S. House of Representatives.

“I’m incredibly grateful for Ally’s initiative and courage to bring this issue to my office so we could get to work on a legislative fix to address it,” Neguse said in a statement announcing the reintroduction of Ally’s Act.

“I think it’s pretty cool,” Ally said of seeing the legislation that her letter inspired. “I’m excited and I hope Ally’s Act passes. I think kids deserve to hear.”