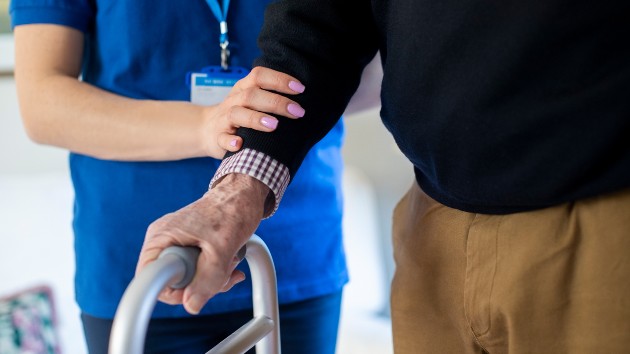 (NEW YORK) — Georgia lawmakers are proposing a new bill that will allow families to reunite with their sick and elderly loved ones in hospitals and nursing homes during the pandemic.

Across the country, hospitals and long-term care providers have banned visitation to curb the spread of COVID-19.

The new House Bill 290, also known as the “Right to Visit Act,” seeks to bar these facilities from enacting policies that prevent a patient from being visited by designated family members and friends during a declared public health emergency.

The proposal would allow residents and patients to see two family members for at least two hours a day.

The proposal would only apply to patients who are in a facility for more than 24 hours. Facilities can set up their own requirements for visitors, such as requiring rapid COVID tests, wearing masks and PPE, and adhering to social distancing guidelines.

The bill will also provide legal protections for hospitals and nursing homes.

Georgia lawmaker Ed Setzler said he introduced the bill to allow families to see each other especially in dire, end-of-life circumstances.

Georgia Rep. Bonnie Rich, who is one of the five lawmakers who co-sponsored the bill, told ABC News, “This has gone on too long. When this first started there was a lot of fear and confusion around COVID-19 and there was a shortage of PPE, but we don’t have either of those situations right now.”

The bill is currently being debated in the Georgia House Human Relations and Aging Committee. Last week, lawmakers spent three hours listening to locals who shared their concerns and support for the bill.

“I have one constituent whose father contracted COVID-19 but refused to go to the hospital because he refused to be isolated and he passed away at home,” Rich said.

Rich herself landed in the ICU near the start of the pandemic and was moved to a blood fusion clinic because the hospital needed space for coronavirus patients.

“If I had gotten sick a week later I would’ve been separated from my family. I can’t tell you how awful that would have been. This is what motivated me to sponsor the bill,” she said.

If passed, the bill will take effect July 1.

While the bill could be a win for families who have been estranged for a year in the pandemic, the Georgia Health Care Association said it will put vulnerable communities in jeopardy.

The group said “HB 290 as currently written would put long-term care communities in jeopardy of being non-compliant” with Kemp’s executive orders and the state’s department of health’s administrative order. It is working with the sponsors of the bill to “resolve any conflicts.”

Long-term care facilities were especially hard hit in the crisis.

Currently there are 25,286 COVID-19 positive residents and 14,500 virus cases among staff at 708 nursing homes and assisted living communities in Georgia, according to the state’s latest Feb. 15 long-term care facility report.

There have been a total of 4,147 resident deaths since the start of the pandemic.

Ginny Helms, the president and CEO of LeadingAge Georgia, which represents nursing homes and assisted living communities in the state, told ABC News family members who are vaccinated would be able to visit their elderly relatives in facilities.

“As families get vaccinated, the thing they want most is to see their loved ones. So we feel it can be worked out to have safe visits and that’s what we’re pushing for,” she said, noting the bill needs to be reworked from its current form.

Rich said hospital and nursing home representatives have started to work with legislators on the bill and it’s being revised to appease all parties.

“This is really a patient right. The patient is the one that suffers the most when they’re separated,” Rich said.