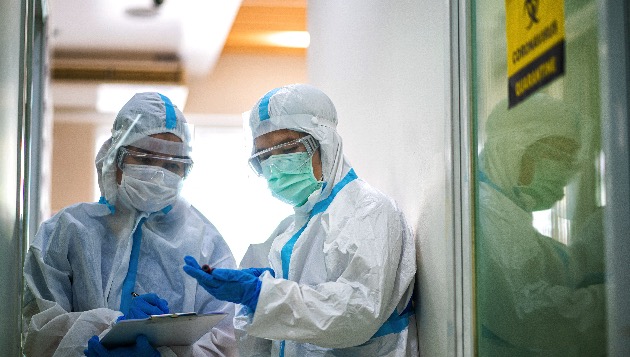 (TAMPA, Fla.) — A jarring reality check is taking place in intensive care units across the country as thousands of COVID-19 positive patients, nearly all of them unvaccinated, are streaming into hospitals in need of care.

This is particularly true in Florida, where virus-related hospitalizations have skyrocketed in recent weeks. The situation has escalated rapidly, now nearing peak levels, with nearly 7,900 patients hospitalized with the virus across the state, up by more than 320% in the last month, according to data from the Centers for Disease Control and Prevention.

“It feels like it’s an impending storm … there’s no off ramp to this getting worse,” Dr. David Wein, an emergency room physician at Tampa General Hospital in Florida, told ABC News on Wednesday.

On Tuesday this week, more than 1,450 patients with COVID-19 were admitted to hospitals across the state, marking the highest number of patients seeking care within a 24-hour period in Florida since the onset of the pandemic.

“Right now, at Tampa General Hospital, we are really feeling the crush of this increase incidence of COVID-19, and so the delta area has really brought many patients to our emergency room, requiring treatment and admission,” Peggy Dugan, the executive vice president and chief medical officer at the hospital, told ABC News in an exclusive interview.

It was just six weeks ago that some of the team thought they may be out of the woods, with metrics steadily trending down across the country.

“It felt like we were ready to move in the right direction and start seeing it plateau. And it was a surprise to see it trend up like it did,” said Erika Mergl, nurse manager for the Tampa General Hospital’s Global Emerging Diseases Institute.

“We’re getting to numbers that were as high as last summer. In early July, we were down to 12 COVID-19 patients in the hospital, and today we have 80. So we’re really just seeing an escalation over a short span of time,” Duggan said.

The situation in Tampa is not an anomaly. Nearly every state in the country is now experiencing case, and COVID-19 hospitalization increases. Virus-related hospitalizations levels are now at their highest point since April, with nearly 33,700 patients receiving care — about 10,000 more patients than a week ago.

Many of the patients at Tampa General are younger, Dugan said, some as young as 22 or 23 years old, and “almost” all of them have been unvaccinated, the hospital said.

One of the hospital’s unvaccinated patients is 64-year-old patient Gerard Considine, who spent nine days intubated after he tested positive for the virus.

“I’m not used to being scared of anything, but this scared the hell out of me,” Considine told ABC News.

Considine said he didn’t get the COVID-19 vaccine because he had experienced adverse reactions to other vaccines, but despite his ordeal, he does not think he will choose to be vaccinated, believing that he has developed some antibodies, at this point.

However, said Duggan, “we’re seeing people who are recovering now very regretful that they didn’t get the vaccination in the first place.”

Many of the patients coming to the hospital are already quite ill when they arrive, said Wein.

“Unfortunately, we’re seeing people who are coming in days, or several days, into their disease and sicker, with difficulty breathing, needing to be admitted to the hospital. So it feels more like that winter surge that we had,” Wein said, adding that a number of these patients end up on ventilators.

“This is heartbreaking because all this could have been avoided, this is unnecessary human suffering that we are witnessing right now,” Dr. Seetha Lakshmi, the medical director of the Global Emerging Diseases Institute at Tampa General Hospital, told ABC News.

Several front-line workers at Tampa General Hospital expressed to ABC News their deep concern and fear about the next several weeks for their teams, given the state’s and the hospital’s exponential increase in infections and virus-related hospitalizations, stressing that their message to Americans is that vaccinations are key to controlling the pandemic and ending the suffering.