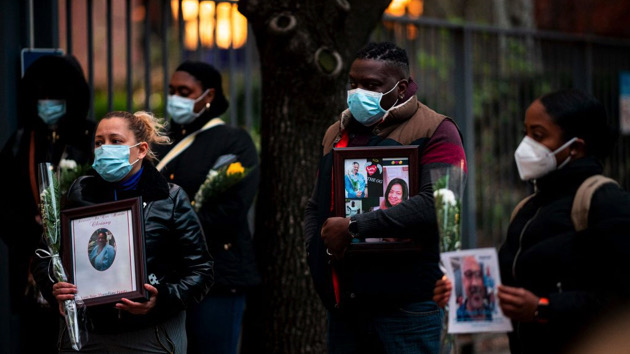 (NEW YORK) — Political polarization in the U.S. was evident and intensifying long before the onset of the COVID-19 pandemic, two years ago.

Polling shows that the emergence of the novel coronavirus in 2020 exacerbated the rift, pushing Americans further apart on key pandemic response efforts.

Surveys from Pew Research Center, last year, found that in the early months of the pandemic, about 6 in 10 Democrats and Democratic-leaning independents believed the virus was a major threat to the health of the U.S. population, compared to only a third of Republicans and GOP-leaning independents. That 26-point gap would ultimately grow to approximately 40 points by the fall, researchers found.

Over the last two years, few issues have been more divisive than the pandemic and related policies — from the raging debate over mask use, to the ongoing push to get Americans vaccinated.

Among all factors in the prevention of severe COVID-19 and death, vaccination has been key, experts say.

Unvaccinated Americans are several times more likely to be hospitalized and die and those living in rural areas, as well as conservatives and Republicans, were among the most hesitant to be vaccinated, according to a September 2021 ABC News/Washington Post poll. For unvaccinated Americans, the decision to not wear a mask or follow other restrictions, ultimately caused increased transmission, which in turn, resulted in more severe outcomes, experts suggest.

The end result is a gulf in COVID-19 death rates between red and blue states, one that is particularly amplified when examining the most and least vaccinated states.

“In the United States, COVID-19 has become a political issue, and people’s political beliefs strongly influence their behavior,” David Dowdy, an infectious disease epidemiologist at Johns Hopkins Bloomberg School of Public Health, told ABC News. “Political divides in our thinking about COVID are much stronger than in many other countries.”

Though politicization of the virus likely played a significant role in the differing death rates, due to varying approaches to restrictions and vaccination efforts, experts say, a myriad of other issues also contributed, including access to adequate healthcare, and the disproportionate impact of the virus on communities of color.

Vaccination rates and receptivity to mitigation measures have also been influenced by factors including misinformation.

It has been nearly a year since the COVID-19 vaccines became available to every American adult last April, after initially being offered to health workers and older populations, when supplies were still limited.

However, vaccination rates differ markedly between states that voted for former President Donald Trump, compared to those that voted for President Joe Biden, paralleling the partisan lines that have divided the country.

Further, cumulative death data from the C.D.C., from over the last 10 months, illustrates the implications of political polarization of the COVID-19 vaccines.

Over the span of the last 10 months, in the 10 states with the lowest vaccination rates, where between 50 and 54.5% of the total population had been fully vaccinated, there was an average of 153 COVID-19-related deaths per 100,000 residents.

In contrast, during the same time period, the 10 states and jurisdictions with the highest vaccination rates, which all voted for Biden, there was an average of about 82.2 related deaths per 100,000 residents. In all 10 states, about 75% of residents had been fully vaccinated.

“There are a few reasons why we’re seeing such differences in death and vaccination rates. The obvious one is that both vaccinations and other forms of COVID-19 mitigation have become heavily partisan,” Seth Masket, a professor of political science and director of the Center on American Politics at the University of Denver, told ABC News.

According to experts, political polarization has led to different responses and attitudes with respect to the pandemic.

While in the early months of the pandemic, many Democratic governors strongly promoted stay-at-home orders, masking initiatives and other mitigation measures, Trump, and some Republican governors, sought to deemphasize the seriousness of the threat of the virus, prioritizing instead the economy and the value of independence, Dowdy argued.

“It’s going to disappear. One day — it’s like a miracle — it will disappear,” Trump said in late February 2020. “The coronavirus is very much under control in the USA.”

Trump later admitted to veteran journalist Bob Woodward that he had indeed tried to downplay the severity of the virus because he did not want to create panic.

“From early in the pandemic, following the rhetoric of then-President Trump, Republicans have consistently not been as concerned about the dangers of COVID-19, and they have been more skeptical of medical advice about preventing its spread,” ​​Masket said. “Democratic leaders have consistently expressed more concern about the disease and Democratic voters have largely followed suit.”

Last fall, an ABC News/Washington Post poll found that the increase in infections caused by the delta variant surge resulted in a jump in perceived risk of catching the virus, from 29% in late June to 47% in September. However, only 39% expressed worries about the consequences of infection.

While most states imposed restrictions on gatherings and businesses, issuing stay-at-home orders and masking mandates, in an effort to curb the spread of infections, a number of states moved to ease restrictions and masking requirements soon after the first wave abated in 2020.

Eleven states — all of which are led by Republican governors — never issued a statewide masking mandate.

These restrictions, along with the masks and vaccine mandates, had made a significant difference in protecting people from infections, Peter Jacobson, professor emeritus of health law and policy at the University of Michigan School of Public Health, told ABC News.

“In easing these restrictions earlier, more people were going to be exposed,” Jacobson said. “The blue states took this entire outbreak more seriously… You can’t underestimate the messages that were being sent to the public.”

A November 2021 study published in the National Institute of Medicine’s National Library of Medicine, found that “politicization has undoubtedly contributed to hesitancy toward uptake of the COVID-19 vaccine.”

Since the introduction of the vaccine drive, over 250 million Americans have received a shot — representing about 76.8% of the total population, according to federal data. However, despite concerted efforts to convince those most hesitant, 57 million eligible Americans over the age of five remain completely unvaccinated.

Despite the fact that the former President Trump created Operation Warp Speed, which developed COVID-19 vaccines at a record pace, and endorsed the use of the vaccine, alongside Republican allies like Florida Gov. Ron DeSantis, a large swath of Americans have still refused the shots.

“The irony of course, is that the Trump administration was responsible for fighting for this pandemic funding, in fast-tracking the vaccine process that has really saved a lot of lives,” Jacobson said.

However, while Trump and some of his allies have encouraged vaccination, many still decried mandates.

According to polling from KFF, as of February 2022, just 56% of Republicans are vaccinated, as compared to 70% of Independents, and 92% of Democrats. In addition, a third of Republicans reported that they definitely would not get vaccinated.

Experts have stressed repeatedly that the global and domestic vaccination drive ultimately saved the lives of millions of people.

Experts stress the importance of other factors at play, besides politics, to also explain the higher COVID-19 death toll in red states as compared to blue states.

“Democrats and Republicans tend to live in different kinds of areas. Republicans are more likely to live in more sparsely populated areas, where diseases may not spread as easily, but health facilities also tend to be farther away,” Masket said.

Lack of access to transportation, proper to pharmacies, all have major consequences for public health, Jacobson added.

“All relevant problems begin with access: access to treatment, access to pharmaceuticals. These issues were exacerbated in the pandemic,” Jacobson said. “People in some communities don’t even have transportation to [healthcare] facilities.”

According to ABC News’ analysis last summer of pharmacy locations across the country, there are 150 counties where there is no pharmacy, and nearly 4.8 million people live in a county where there’s only one pharmacy for every 10,000 residents or more.

Based on Census data, there are far fewer pharmacies per person — especially chain pharmacies — in rural parts of the country compared to urban areas.

In addition, the inequities, with respect to access, underscore the racial gap prevalent throughout the country, in both rural and urban areas, with more pharmacies in whiter and wealthier neighborhoods per person than in poorer, predominantly nonwhite neighborhoods.

Persisting disparities throughout the pandemic have also resulted in a higher likelihood of death from COVID-19 for Black and brown Americans.

According to federal data, adjusted for age and population, the likelihood of death because of COVID-19, for Black, Asian, Latino and Native American people is about one to two times higher, compared to White Americans.

Although some minority communities initially lagged behind in the nation’s vaccination efforts, the rates of Black and Brown Americans have significantly caught up proportionally to their respective populations.

Comparatively, about 54.4% of White Americans have received their booster, while Asian Americans lead every race/ethnicity group, with 60% of the eligible population boosted.

Misinformation and distrust of science and government exacerbated by the pandemic

The pandemic has exacerbated an already deteriorating public trust in the scientific community, experts say.

“Science has unfortunately, always been politicized in the United States,” Dowdy said. “Many view scientists as being alarmist rather than rational. When scientists in the U.S. push for things like COVID-19 vaccination, this has also become a political — rather than objective — statement.”

In addition, confusion over inconsistent and shifting messages from the federal government further eroded trust in the management of the pandemic by health agencies, intensifying the divide.

“It’s concerning that the pandemic seemed to deepen the pre-existing gaps in confidence between Republicans and Democrats in our national health agencies,” said Thomas Wood, assistant professor of political science at The Ohio State University.

The C.D.C. has repeatedly defended itself against accusations of flip-flopping, as they updated their public health guidelines, throughout the pandemic.

The reality has been that the science behind COVID-19 is not black and white, but more often, gray, C.D.C. Director Dr. Rochelle Walensky told CBS News’ “60 Minutes,” earlier this month.

“Since my getting here what I said is, ‘we’re gonna lead with the science.’ The implication was that science was black and white, and in fact, in an ever-evolving virus, and a two-year-long pandemic, the science isn’t always black and white. It’s — it’s oftentimes shades of gray,” Walensky said.

Further, the barrage of misinformation, particularly in the first few months of the pandemic, and of denialism, added Jacobson, played a big role in abetting this lack of trust in science, as well as in government, in public institutions, and ultimately costs lives.

A key question for officials to address will be how to repair the damage that has been done to public health, to the sciences, given the politicization of the pandemic, Jacobson explained.

The long-term implications for public health are, if not dire, certainly troublesome, he added.

“We are not going to be prepared for [the next pandemic], because the public isn’t prepared,” Jacobson concluded.