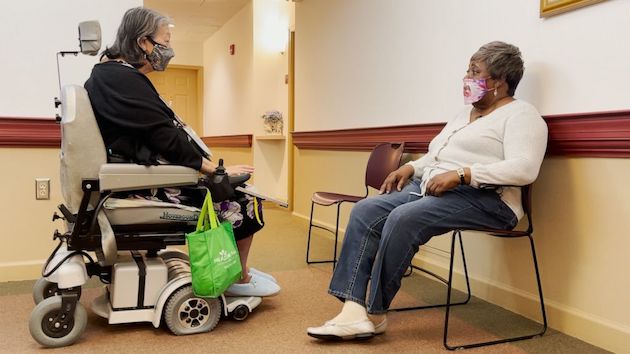 (WASHINGTON) — JoAnn Rankin rolled down the hall of her elderly apartment complex in a sequined face mask and matching silver eyeshadow. Even though her mask covered her mouth, her eyes were smiling.

She was signing up for the COVID-19 vaccine — something that just days before seemed impossible.

Wheelchair-bound, Rankin suffers from diabetes, high blood pressure and cellulitis in her legs. She lives in downtown Baltimore and getting around is difficult for her: She has no car and no family in the area to help take her to a vaccine clinic or wait with her at a mass vaccination area.

“The bus is okay to use if you have the ability to stand up and wait for it. But people who are handicapped like myself, I just don’t want to sit in the chair for that long,” 69-year-old Rankin told ABC News.

Having suffered from COVID-19 in November 2020, she is desperate never to get it again. Spending four agonizing days in the intensive care unit, she begged her doctors to let her die.

“I call my girlfriend and I said ‘Debbie, I think you need to know that I’m going to die, so you might want to call my family,’ because I couldn’t do it,” explained Rankin. “And she said ‘No, you’re not gonna die. Just keep thinking God’s going to take care of you."”

Rankin was one of the lucky ones: She survived. But the virus left scars — ones you can see and ones you can’t.

“I never had anxiety like I do now. I mean, it’s like each day I wake up, I don’t want to sleep because I’m afraid I might not get up,” said Rankin.

So when the vaccine rollout began in January, Rankin was eager to sign up, until she realized how physically difficult it would be to get to a vaccine.

Despite the millions of Americans fortunate enough to receive one of the three FDA-approved COVID-19 vaccines, Rankin and thousands of Americans like her — people who want the vaccine, but with no way to get one – are still falling through the cracks of the vaccine initiative.

That’s where Maryland-based LifeBridge Health stepped in. The medical team there is bringing a mobile vaccination unit to individuals who can’t access it otherwise.

“There are fewer and fewer resources to be able to provide this kind of care. So we developed a team last year in response to the governor’s request for strike teams… and this team that’s working with us is an outgrowth of that,” said LifeBridge Health Population Health Director Jonathan Eldridge, whose mobile unit came to Harlem Gardens to give Rankin and nearly 50 other elderly residents their first doses of the vaccine.

The mobile unit is also bringing the desperately needed vaccine to rural areas in Carroll County, Maryland, but because of the miles of road between patients’ houses, the medical staff may only vaccinate a few people a day.

One of those patients is 20-year-old Jack Feldman, who has a rare genetic disorder that makes him vulnerable to lung and respiratory issues. Because of his developmental disabilities, he also doesn’t understand the importance of wearing a mask in a public space.

“Jack will not wear a mask. So of course I’m going to protect him,” said his mother, Barabara Feldman.

“If he won’t wear a mask, I’m not going to put him in a situation where he…” she said, her voice trailing off. “It’s just not worth it.”

In March, Feldman’s prayers were finally answered during a routine check-up call with a health department nurse, who asked Feldman if she would be interested in the mobile vaccine unit coming to her house.

That vaccine unit came to her home on a sunny, warm March morning. The nurses, Ashley DiMaggio and Sarah Cross, administered the vaccine to Jack in their backyard.

Each nurse brings their own experiences – DiMaggio has a background in home care, while Cross focused her career in pediatrics — which allows them to cater better to each patient.

“Some adults with special needs can get really out of sorts when you put them in an environment that’s loud, with a lot of lights and colors and sounds and people and strangers,” explained Cross. “[Places like clinics or pharmacies] can really cause some serious anxiety that isn’t necessary if we can come to your home,” she continued.

In the case of Jack, “It only took us a couple seconds. And he did great and went right back to his day and his routine. We didn’t mess up his whole day,” said Cross.

The next house on the nurses’ list? A dementia patient who lived more than 30 minutes away.

John Briscoe, 63, was an engineer and worked at an applied physics lab for more than 25 years until his health started to decline.

“Towards the end of my working years at Johns Hopkins, I drank a lot and I destroyed part of my brain,” explained Briscoe, pausing a few times to find the right words.

As his disease progressed, his memory became worse.

“It’s really shocking when you when you wake up and you look at your own wife and you don’t remember her name,” Briscoe added.

John’s wife, Bonnie, tried for weeks — months — to get her husband the vaccine.

“I couldn’t get any appointments. I’ve reached out to all the facilities I could,” she said.

Briscoe is hoping the vaccine will give him a new lease on life after spending the last year inside.