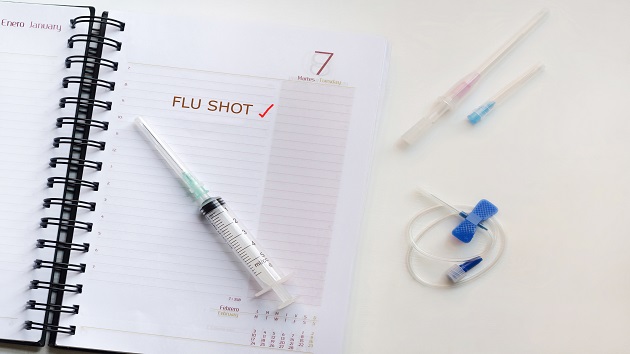 (NEW YORK) — Flu season is making an early comeback as flu-related hospitalizations are the highest in over a decade for this point in the season, according to the Centers for Disease Control and Prevention.

There have been an estimated 880,000 cases of lab-confirmed influenza illnesses, 6,900 hospitalizations and 360 flu-related deaths nationally this season, according to data released on Friday.

Just this past week, there were 2,332 newly-admitted patients in hospitals, over a third of the total 6,900 flu hospitalizations this season already.

H3N2 is the predominant viral strain currently spreading. Previous seasons with mostly H3N2 viruses have been of higher severity, particularly for older adults and young children, the CDC says. It’s still too early to tell if this trend will continue.

The U.S. has not seen this high of a burden since the 2009 H1N1 swine flu pandemic. The national public health agency uses this as a metric to estimate a season’s severity based on laboratory-confirmed cases, doctor visits, hospitalizations and deaths.

Hospitalization rates are highest in adults over the age of 65 and young children, a level consistent with prior flu seasons for older adults, but a relatively new high for children.

This early flu season is additionally concerning with the pediatric surge of respiratory illnesses like RSV already filling up 75% of pediatric beds and surges of activity at the nation’s emergency departments.

“What worries me is the fact that we’re seeing flu [cases] increase. We have a lot of kids admitted right now with RSV…and you layer on a subset of kids who now are going to end up with flu,” said Dr. Melanie Kitagawa, medical director of the pediatric ICU at Texas Children’s Hospital.

Pediatric hospital beds in 9 states and Washington, D.C., are already above 80% capacity, with another five states over 90%, according to the Department of Health and Human Services.

Experts note that the pediatric surge is something that has been steadily growing over time with an already overtaxed healthcare system.

“This has been kind of a problem that’s been brewing for even several years. We know that hospital beds when it comes to the ability to care for children have decreased especially in our rural communities,” said Dr. Elizabeth Murray, a spokesperson for the American Academy of Pediatrics and pediatric emergency medicine physician at the Gaza Children’s Hospital in Rochester, New York.

The potential for a COVID-19 surge, which we have not seen yet, could compound the threat.

Currently, COVID-19 cases, hospitalizations and deaths have slightly increased over the past week. There are still nearly 400 deaths from the disease daily.

Experts say that vaccines and therapeutics are available for both the flu and COVID.

“Many doctors will prescribe an antiviral, such as Tamiflu. And that will reduce their likelihood of developing the complications of influenza and help keep them out of the hospital,” said Dr. William Schaffner, a professor of infectious diseases at Vanderbilt University Medical Center.

Flu vaccination coverage among children and pregnant people has decreased during the past two years. Lower coverage and little flu circulation during the pandemic may have reduced population immunity, especially in young kids, which could lead to more flu illnesses this season, and potentially more severe illness, the CDC says.

The flu vaccine is recommended for everyone 6 months and older and the COVID booster is recommended for anyone over the age of 5. The best time to get your shots is before Halloween – or as soon as possible, health officials say.

Flu cases, hospitalizations, deaths continue to surge across US