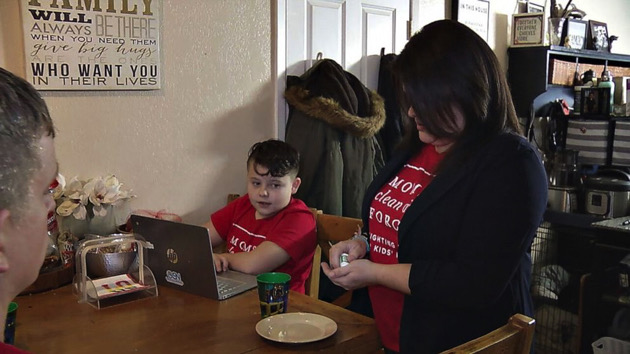 Jennifer Cantley at home with her children. - ABC News

(NEW YORK) — In Carson City, Nevada, one family is choosing to spend more time indoors because they said smoke from wildfires and soaring temperatures caused by climate change are sometimes making it difficult for them to breathe outside.

Jennifer Cantley, who is a mother of three, told ABC News that she checks the air quality outside before she lets her children go out and play. Cantley said she and two of her children have asthma, which she said makes the conditions more dangerous for them.

“When the smoke comes in and we start seeing these beautiful Sierra mountains behind me disappearing, it’s first of all, it’s really hard because we’re having our beautiful view taken away from us,” she said. “But at the same time, now that means we’re going to be back indoors and we can’t leave for sometimes it’s a whole month.”

Cantley is part of “Moms Clean Air Force,” a nonprofit environmental advocacy organization made up of more than 1 million parents. Cantley helped push local legislators to install an air quality monitor in her community.

56% of U.S. adults between the ages of 18 and 45 say they are worried about the effects of climate change on children’s physical health, according to a new ABC News/Ipsos poll. In a separate question, 71% of parents with children under the age of 18 say they are concerned about the impact that climate change will have on their children. This number rises to 79% of parents living in the western U.S.

“They’re suffering more physical injury and psychological trauma from severe storms and floods,” she said. “Also, we’re seeing more infectious diseases that are carried by ticks and malaria that have moved to new areas due to climate change and also from air pollution.”

In one study published this year, Perera and her co-authors wrote fetuses, infants and children “can be vulnerable to exposure to air pollution and climate change.”

“We used to think the placenta was a perfect barrier and the baby was literally in a cocoon, protecting them from the factors that the mother might experience in her environment,” she said. “And that’s not true. Air pollution is capable of reversing, moving across the placenta into the fetus.”

“My number one goal is making sure now my children, but the future generations have clean air, clean water and public lands,” Cantley said.

This ABC News/Ipsos poll was conducted using Ipsos Public Affairs’ KnowledgePanel® November 14-16, 2022, in English and Spanish, among a random national sample of 1,328 adults ages 18-45. Results have a margin of sampling error of 3.0 points, including the design effect. See the poll’s topline results and details on the methodology here.