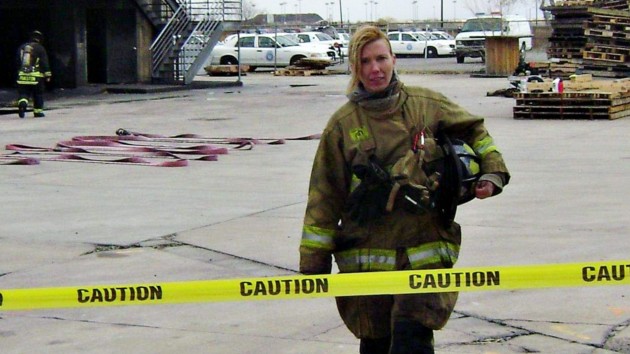 (NEW YORK) — A female firefighter in Colorado who learned that her treatment for breast cancer would not be covered under her health coverage fought for change in order to level the playing field for all firefighters.

Tracy Post, a lieutenant in the Westminster, Colorado, fire department, was diagnosed with stage 2 invasive ductal carcinoma in November 2019.

Post, 45, who has worked for the fire department since 2013, had to undergo a double mastectomy and four rounds of chemotherapy to treat her cancer, followed by breast reconstruction.

As she began her treatment, Post said she discovered that breast cancer was not one of the five types of cancer covered under the Colorado Firefighter Heart and Cancer Benefits Trust, which provides mandated cardiac and voluntary cancer benefits to the state’s firefighters.

Post twice appealed to the board of trustees for coverage, but her appeals were denied. As a result, Post had to pay out of pocket for the costs of her breast cancer treatment not covered by insurance.

“I have health insurance through the city but it’s still incredibly expensive,” Post told ABC News’ Good Morning America. “My percentage [of costs] was in the tens of thousands of dollars.”

And because breast cancer was not recognized by the trust as a job-related cancer, Post also had to return to work during her chemotherapy treatments in order to not have to go on short-term disability and have her pay decreased.

“I could have just stayed at home and concentrated on getting better instead of having to figure out having to also continue to work,” she said. “It was incredibly frustrating.”

While Post described not having breast cancer covered by the trust as “incredibly frustrating,” she said she was also understanding of the trust’s initial ruling to not include breast cancer as one of the five cancers it covers. Many states, including Colorado, have what are called presumptive cancer laws that recognize certain cancers as job-related cancers because of firefighters’ exposure to carcinogens.

“You have to appreciate [the ruling] because they are trying to maintaining the trust and be financially responsible for the good of all firefighters,” she said. “I wanted to prove to them that adding breast cancer, aside from being the right thing to do and being justified, was also not going to financially exhaust the trust itself.”

While men can get breast cancer, the disease most often occurs in females and is the second most common cancer among women in the United States, according to the U.S. Centers for Disease Control and Prevention (CDC).

Across the country, female firefighters make up less than 10% of the fire service, according to the National Fire Protection Association (NFPA). That percentage is even smaller in Colorado, according to Post.

“When the trust was created, they had the best intentions in place for trying to cover the most cancers they could at that point in time, and at that point in time, the five cancer systems that they covered were the most prevalent cancer systems,” said Post. “However, the data pool that they pulled that statistic from was 97% male. Breast cancer is not typically considered a male disease and a 3% population is not going to provide staggering statistical data for coverage.”

Even though Post’s appeals had been denied and she would not benefit from a change in the trust’s coverage, the mother of two set out to change the rule to help her fellow female firefighters. While undergoing treatment for her own breast cancer, she spent what she describes as “every waking moment” compiling data and statistics in a presentation to compel the trust to add breast cancer coverage.

“I just wanted to make sure that the ladies I work with get the benefit if one of them happens to get breast cancer down the road,” said Post. “Or somebody else who is a firefighter because she loves helping people and it’s the right thing to do for her community, I want to make sure that she knows that her back is covered if something goes wrong down the line.”

After Post made the first of three presentation’s to the trust’s board of trustees, word began to trickle back to the Westminster Fire Department of the monumental task Post was undertaking, all by herself and on her own time.

“And for her to put forth that effort, realizing that she’s not going to gain anything from it, that’s a pretty unique human trait,” Hall added. “That to me defines the true essence of a servant leader.”

“Tracy was tenacious,” said Frainier. “She knew that if it did get approved she wouldn’t benefit from it, and she kept fighting.”

In August, Post was in her office listening to the board of trustees meeting, via a conference call due to the coronavirus pandemic, when the board voted unanimously to approve adding breast cancer to the trust’s cancer coverage.

“I just wept. The tears ran down my face,” she recalled. “I’ve never had so much hope and gratitude and thankfulness at one moment at any time in my life. It was so wonderful.”

“I’m so thankful because not a single person on the trust didn’t not want to support the women of Colorado,” she said. “Not a single one said that this isn’t the right thing to do.”

The provision that Post fought for went into effect on Jan. 1, 2021, making Colorado one of only around a dozen states that includes breast cancer in its presumptive cancer laws.

“To me, it’s 2021 and [female firefighters] are still a small percentage, but we’re still a percentage,” said Post. “I just really hope that the laws catch up to the times and that they realize and recognize that women are members of the population and that breast cancer is not just a women’s disease, that it’s a firefighters’ disease.”

Frainier said he hopes women see that they are not only welcome but protected in the fire service in Colorado, and it’s all thanks to Post.

“In Colorado, her name will be attached to breast cancer coverage for the rest of the trust’s existence,” he said. “The kind of work that she put in knowing that long-term she wasn’t going to benefit, but how tenacious she was in continuing to fight to get this coverage shows what the fire service means to her.”

Less than one year after undergoing a double mastectomy and chemotherapy, Post is back on the job at what both she and Hall described as the city’s busiest fire station, while still undergoing hormone suppressive therapy treatments to try to prevent her cancer from recurring.

As she reflects back on the work she did to help her fellow firefighters, Post said she is “very thankful that I’m incredibly stubborn.”

“My parents brought me up to fight for what’s fair. The fact that it just wasn’t fair, I thought, ‘Well, this is just not okay,"” she said. “It was like, well, I can sit here and be a pity party for one or I can keep going and make it better for someone else, and that’s what I chose to do, to make it fair.”