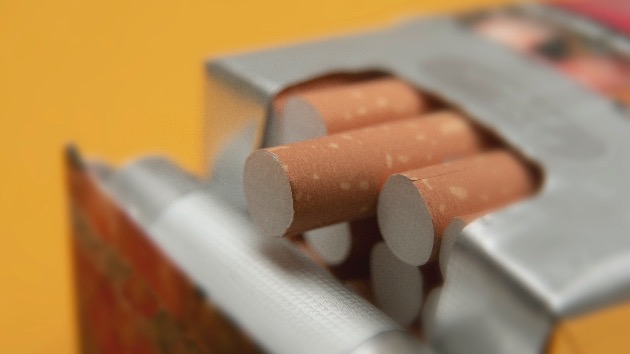 (WASHINGTON) — The Food and Drug Administration plans to ban menthol in cigarettes and all flavors in cigars, a step the agency says will reduce tobacco use and curb preventable illnesses and deaths.

The FDA says flavored products, including menthol, are more appealing to kids and young adults because they mask the harshness or unpleasant flavors of tobacco products. There are 18.6 million smokers of menthol cigarettes in the U.S., according to FDA. Out of Black smokers, 85% smoke menthol cigarettes, compared with 30% of white smokers, the agency says.

The FDA estimates the ban would lead more than 920,000 smokers to quit smoking, including 230,000 Black Americans in the first year and a half.

“Banning menthol — the last allowable flavor — in cigarettes and banning all flavors in cigars will help save lives, particularly among those disproportionately affected by these deadly products,” Acting FDA Commissioner Janet Woodcock said in a statement.

“With these actions, the FDA will help significantly reduce youth initiation, increase the chances of smoking cessation among current smokers, and address health disparities experienced by communities of color, low-income populations, and LGBTQ+ individuals, all of whom are far more likely to use these tobacco products.”

Woodcock said many Americans don’t realize menthol cigarettes are more harmful because they make it easier to become addicted to smoking and more difficult to quit.

The FDA says it plans to propose the ban through an official rule within the next year, which would then go through a formal public comment process before becoming final.

Advocates who oppose the announcement and the American Civil Liberties Union raised concerns a ban would disproportionately impact non-white communities. Their concern is that criminalizing menthol cigarettes will lead to more incidents like what occurred when Eric Garner died after being put in a chokehold during an interaction that began when police approached him for allegedly selling loose cigarettes.

“At this pivotal moment, as the public demands an end to police violence erupting from minor offenses, we call on the Biden administration to rethink its approach and employ harm reduction strategies over a ban that will lead to criminalization,” Aamra Ahmad, senior legislative counsel with the American Civil Liberties Union, said in a statement.

“As we approach the one-year anniversary of the murder of George Floyd — only a few years removed from the killing of Eric Garner, a Black man killed by NYPD for selling loose, untaxed cigarettes — the racially disparate impact of the criminal legal system has captured the nation’s attention. It is now clear that policies that amount to prohibition have serious racial justice implications.”

Mitch Zeller, director of the FDA’s Center for Tobacco Products, said the agency does not plan to pursue action against individuals for possessing menthol cigarettes or flavored cigars if the ban is enacted. He said FDA’s authority would apply to entities that manufacture, import, distribute, or sell the products and that the FDA would work to make sure other federal and local law enforcement agencies understand it doesn’t criminalize possession.

“Given all of the ongoing, and very understandable concerns about what’s going on with policing we would make sure that law enforcement agencies at all levels understand that when it comes to the enforcing of such a rule were it to go final, that, our jurisdiction ends with manufacture, distribution, sale, imports, retailers, and that we do not enforce against possession,” Zeller told reporters during a briefing.

The FDA enacted a ban on many flavors in e-cigarette products last year to make them less appealing to teenagers, especially after a string of vaping-related lung injuries. Anti-tobacco advocacy groups praised Thursday’s announcement and said they hope the Biden administration works to ban all flavored nicotine products from the market.

“We are hopeful that today’s announcement is the first of many by the Biden administration and FDA to finish the job and eliminate all flavored tobacco products from the market, specifically flavored e-cigarettes which are still widely available and are a key driver of the persistent national youth e-cigarette epidemic,” said Robin Koval, CEO and president of the Truth Initiative, in a statement released Thursday.

Most flavors in combustible cigarettes were banned in the 2009 Tobacco Control Act, which directed the FDA to look into the impact of menthol but did not ban it. Thursday’s decision was announced in response to a citizen petition and lawsuit calling on the FDA to pursue a ban after years of studying the issue. Advocacy groups that petitioned for the ban and later sued the FDA for failing to meet response deadlines said they will continue to press the agency to ban menthol products.