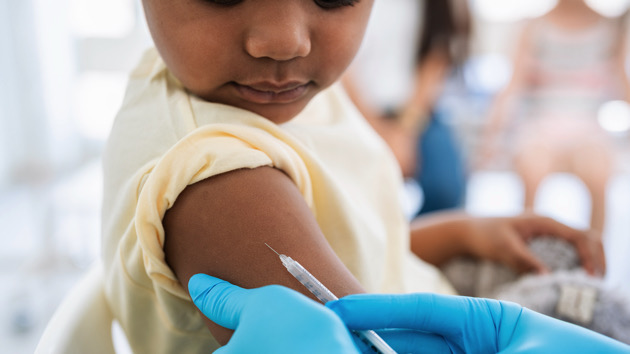 (WASHINGTON) — Parents with young kids are one step closer to getting them vaccinated following a grueling wait for the last remaining group to be authorized for a vaccine.

The process for authorization and recommendation from the regulatory agencies kicked off Wednesday with a meeting of the Food and Drug Administration’s committee of independent experts.

Though kids have generally had less-severe cases of COVID-19 than older adults, there have still been nearly 500 deaths in kids under 5 and over 30,000 hospitalizations in the U.S.

“We are dealing with an issue where I think we have to be careful that we don’t become numb to the number of pediatric deaths because of the overwhelming number of older deaths here. Every life is important. And vaccine-preventable deaths are ones that we would like to try to do something about,” said Dr. Peter Marks, who runs the vaccine division at the FDA.

“Granted, it’s a population that has been much less affected than the older populations, particularly the oldest population, but one nonetheless that has also been affected. And I think for those who have lost children to COVID-19, our hearts go out to them, because these are — each child that’s lost essentially fractures a family,” Marks told the committee on Wednesday.

Officials from Pfizer and Moderna stressed Wednesday that their vaccines are safe and effective at protecting young children against COVID-19.

Both companies reported mild reactions to the shots. Among young children, fevers and pain at the injection site were the most common symptoms reported following the shot, with most post-vaccination symptoms resolving in a matter of days.

“These pediatric groups represent a more vulnerable population, so it is particularly important to minimize reactions, including fever, while achieving an immune response likely to provide protection against COVID-19,” said Dr. William Gruber, senior vice president of vaccine clinical research and development at Pfizer.

Neither Moderna nor Pfizer reported any cases of myocarditis among the youngest children.

And the impact spans wider than the statistics. Parents with kids too young to be vaccinated have dealt with constant child care interruptions from COVID-19 scares and two years of mitigation strategies even after most people in the country dropped their masks.

Once the FDA committee votes on Wednesday, the process moves to FDA leadership to officially authorize the vaccines. If that happens, the administration can start shipping out vaccines to states.

Then, on Friday and Saturday, the Centers for Disease Control and Prevention’s advisers will meet to review the data on both vaccines.

The final step in the process is a recommendation from CDC Director Rochelle Walensky, after which shots can be administered in doctors’ offices, clinics, hospitals, pharmacies and other locations.

Vaccines are expected to be available as early as the week of June 21, if the review processes find the vaccines safe and effective.

Federal officials said they plan to lean into existing networks to get vaccine information out to families, like the American Academy of Pediatrics, mom blogs and PTAs, as well as groups specific to communities of color, like the League of United Latin American Citizens.

“We have learned from our previous campaigns, and one of the most important lessons that we’ve learned is that we know who people listen to when making decisions, and there are trusted people in their lives,” a senior administration official said.

What we know about the differences between the two vaccines

Pfizer’s vaccine is one-tenth the size of the adult dose, given as a three-shot series.

The company’s early data showed it was 80% effective in preventing symptomatic COVID-19. But that protection largely didn’t kick in until the third shot — the data showed very minimal protection after doses one and two.

There was a lot of concern among the members of Wednesday’s FDA committee that Pfizer’s high efficacy headline would lead parents to think it was more protective than it is, and sooner.

As Dr. Paul Offit, a director at Philadelphia Children’s Hospital and member of the panel, warned, “I do support this but I do worry that parents aren’t necessarily going to know that after two doses, they may not be protected at all and engage in the kind of activity that would put their child at risk.”

Other members expressed concern that kids would not return for the third dose, which would render them unprotected.

“We know it’s a struggle to get people in for two, we’ve already seen with the boosters for adults,” said Dr. Jeanette Lee, professor of biostatistics at the University of Arkansas for Medical Sciences. “And so my concern is that you have to get the three doses to really get what you need on this.”

As for Moderna, its vaccine for young kids is one-quarter of the size of the adult dose, given as only two shots.

Early data showed it was about 40% to 50% effective at preventing mild infections after two shots.

But representatives for Moderna said they expected a third shot, or booster, would be available to kids in the coming months — either the current vaccine, or the omicron-specific vaccine the company is developing for the fall — which could increase efficacy.

And overall, experts heavily cautioned that all of the efficacy numbers for both vaccines are based on small samples and could vary greatly as the companies continue to follow the studies for longer.