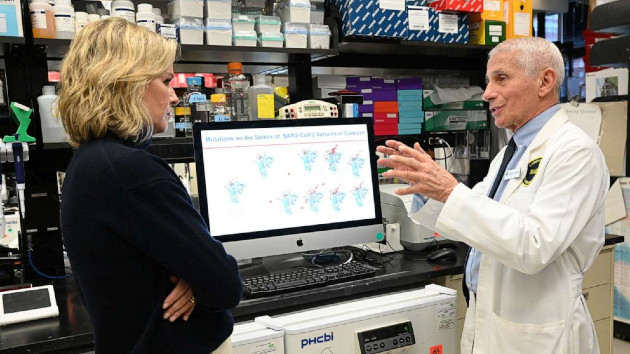 (NEW YORK) — After 50 years, serving seven presidents, spearheading a response to HIV/AIDS, Zika, Ebola and a novel coronavirus, Dr. Anthony Fauci is stepping down from his role in the federal government at the end of December.

Despite being 81 years old, Fauci said he has the energy to still contribute and plans to announce his next career chapter in 2023.

“I would say I feel about 40, and maybe the most, 45,” he told ABC News Chief Medical Correspondent Jennifer Ashton in a power walk around his neighborhood.

Fauci credits his passion for his work as one reason he’s been able to stay active in the federal government years past someone else may have gracefully bowed out.

“A purpose of what you’re doing, where you feel like you’re doing something that has an impact and you get very energetic about it, and that kind of sustains you,” he said. “I don’t get bored. I don’t ever get bored.”

But passion alone can’t keep someone active into their 80s. Fauci also has good genetics to thank for his mental sharpness, he said.

“My father was very, very much like me. He died when he was 97,” Fauci said. “And he had all his smarts at the time he died.”

He’s also stayed active. Fauci has been an athlete all his life — he played basketball in high school, and intramural sports through college and medical school. Then, in his late 30s, he started to run.

“I started to train and then I got really interested and I ran four marathons,” Fauci said.

He loves 10k races as well.

Now, he walks every day.

Fauci also tries to stick to good nutritional habits. He said he gives himself a “B minus” on his diet.

“The one good thing about it is I don’t do anything in excess,” he said. “I don’t drink a lot, a glass of wine or a beer in the evening at the most.”

He loves sweets, but tries to keep those cravings under control.

“I could eat 20 chocolate chip cookies if I had to. And I love New York cheesecakes, but again, I try to control it. I would think among all the health things of exercise, moderation, things like that, my diet is the only one that I’m mediocre on and not really good,” he said.

Despite his commitment to a healthy lifestyle, Fauci said the early days of the COVID-19 pandemic took a toll.

In January and February 2020, he was only sleeping three-and-a-half or four hours each night. He lost weight, and wasn’t feeling well. That’s when his wife, Christine — who’s the chief of the department of bioethics at the National Institutes of Health — stepped in.

The pandemic was an emotional challenge, too. Fauci tested positive for COVID-19 two days before his daughter’s wedding, which was devastating. Luckily, he was still able to FaceTime into the wedding.

After all the decades in public service, Fauci said he’s looking forward to the next stage. He’s about to be a grandfather for the first time. He’s excited to spend more time with his children. And he’s taking everything day by day.