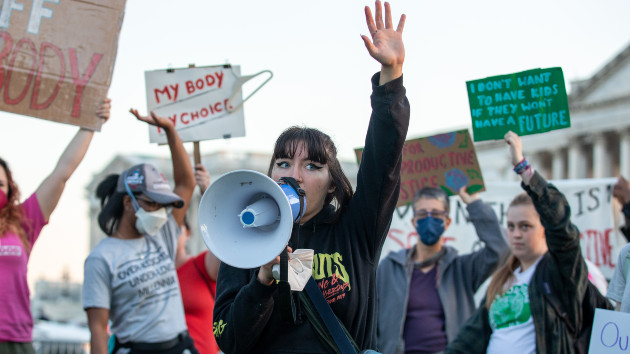 (NEW YORK) — As the nation looks ahead to a possible post-Roe v. Wade world in which abortion is banned in multiple states, medical experts warn there could be wide-ranging health and financial complications for women.

As soon as next month, the Supreme Court’s conservative majority of justices is poised to overturn abortion rights established by Roe v. Wade, according to a draft opinion leaked to Politico.

If Roe is overturned, nearly half of the nation’s 50 states are prepared to ban or heavily restrict abortion, according to the Guttmacher Institute, a reproductive rights organization.

One of the most immediate impacts on women’s health would be maternal health, given that the United States already has one of the highest maternal mortality rates in the world, according to Dr. Ana Langer, director of the Women and Health Initiative and a professor of public health at the Harvard T.H. Chan School of Public Health.

According to Langer, for some women, “simply continuing a pregnancy is more risky than having a safe abortion.”

According to the Centers for Disease Control and Prevention (CDC), around 700 women die each year due to pregnancy or delivery complications within the first year after giving birth in the U.S., which continues to have the highest maternal mortality rate among developed nations.

Black women in the U.S. die of maternal causes at nearly three times the rate of white women, according to the CDC.

The disproportionate rate at which women of color are impacted by pregnancy complications is one reason abortion rights advocates say abortion bans disproportionately impact that population, many of whom are already impacted more greatly by poverty, lack of health care access and racism in the health care system.

“The same folks that are impacted by inequities in maternal health outcomes — Black women, indigenous folks, LGBTQ communities, young people, those living on low incomes — are the same ones that are going to be deeply impacted and more brutally enacted by restricting access to abortion care,” said Dr. Jamila Perritt, a board-certified OBGYN in Washington, D.C., and president and CEO of Physicians for Reproductive Health. “It’s a double hit.”

In 2018, the most recent data available, two people in the U.S. died due to abortion-related deaths, and both deaths were related to legal abortion, according to the CDC.

In instances of pregnancy complications like preeclampsia, placental abruption, placenta previa and cardiac conditions, abortion can often be the only measure to save the mother’s health, according to ACOG.

“There can be things that develop during a pregnancy that can be dangerous, and it can be dangerous for them to continue those pregnancies,” said Dr. Krishna Upadhya, vice president of quality care and health equity at Planned Parenthood. “Not having access to abortion means they will have to continue those pregnancies, no matter the consequences.”

Abortion is a common medical procedure that can be similar to the care a woman gets when she has had a miscarriage, according to Upadhya. She said limiting or banning access to abortion care could also complicate miscarriage care in legal and medical ways.

“When we ban abortion, that also means we prevent or we reduce the opportunities for doctors to know how to provide this care, and then that puts at risk people who need related care,” said Upadhya, adding, “I’m also concerned that people who experience a miscarriage or other pregnancy complication could be questioned about their pregnancy outcome with potential legal implications and that’s a whole other unnecessary problem that people could face as a result of overturning Roe.”

Medical experts including Upadhya and Langer say they also worry what the overturning of federal abortion rights by the Supreme Court could do for other aspects of women’s reproductive and overall health.

For many women, access to abortion care also means access to overall health care like well-woman exams, prenatal care, contraceptive care, treatment for sexually transmitted infections, HIV testing, Pap smears and screenings for breast and cervical cancers. At Planned Parenthood, for example, abortion care accounts for just 3% of the services they provide, according to the organization’s 2019 annual report.

“Planned Parenthood’s motto is care no matter what, so we provide a full range of sexual and reproductive health care,” said Upadhya. “We are doing everything we can to provide all of that care because we know people need that care.”

Another point of concern for women’s health advocates is what the fall of Roe v. Wade could mean for the future of birth control access.

Based on the leaked draft opinion, authored by Justice Samuel Alito, it’s not a far leap to imagine the Supreme Court taking on contraception, according to Kate Shaw, an ABC News contributor and constitutional law professor at Cardozo School of Law.

“A lot of the logic in this opinion suggests that other Supreme Court rulings are quite vulnerable to being revisited and possibly overturned by this Supreme Court that seems really emboldened to torch longstanding precedents because there are the votes to do it,” said Shaw, citing one of the cases as Griswold v. Connecticut, the Supreme Court ruling that invalidated a Connecticut law that made it illegal to use birth control devices or to advise about their use.

Experts say in addition to the immediate health complications for women, restricting access to abortion care has also been shown to have socioeconomic impacts on women, which can trickle down to, again, impact their health.

One frequently-cited study, The Turnaway Study, followed nearly 1,000 women who sought abortions in 21 states. The five-year study concluded that, “receiving an abortion does not harm the health and wellbeing of women, but in fact, being denied an abortion results in worse financial, health and family outcomes.”

Specifically, the study — led by researchers at Advancing New Standards in Reproductive Health (ANSIRH), based at the University of California San Francisco — found that women who were denied abortions were at nearly four times greater odds of a household income below the federal poverty line; had three times greater odds of being unemployed; had an increased likelihood of not being able to cover basic necessities like food and housing; and were more likely to stay with violent partners, putting themselves and their children at risk, according to the study brief.

The study also found women who were denied abortions were more likely to face greater mental health struggles and were less likely to complete advanced degrees.

“When we put restrictive laws in place like this, that ignore a person as a whole and ignore all of the complex decisions that go into deciding to become pregnant and parent,” said Dr. Jennifer Conti, a California-based OBGYN and abortion care provider. “We create dangerous situations where they have to choose between continuing a pregnancy and sometimes worsening their own medical conditions or worsening their own financial, economic decisions.”

In remarks Wednesday at a U.S. Senate hearing, Treasury Secretary Janet Yellen described how access to abortion can change the course of not only a woman’s life, but society’s circumstances, too.

“Roe v. Wade and access to reproductive health care, including abortion, helped lead to increased labor force participation,” she said. “It enabled many women to finish school. That increased their earning potential. It allowed women to plan and balance their families and careers, and research also shows that it had a favorable impact on the well being and earnings of children.”

If Roe v. Wade is overturned and, as a result, as many as two dozen states potentially ban or restrict abortion access, experts like Perritt, of Physicians for Reproductive Health, predict both the socioeconomic and health divides in this country will become even greater.

Already, in states like Texas, where abortion is heavily restricted, there are high rates of maternal and infant mortality and poverty, data shows.

And Texas’ ban on most abortion after six weeks of pregnancy, instituted last year, has not slowed the rate of abortions but rather has required people seeking abortion care to travel out of state, according to research from the University of Texas at Austin.

“We know what happens when you eliminate access to abortion at the state level. It means that people who have resources, people who have the ability, will travel to get care if they can, but most people cannot and will not,” said Perritt. “What we’ll be faced with is folks that are seeking care outside the formal medical system, and also folks who will be forced to carry pregnancies to term that they cannot and do not want to carry.”