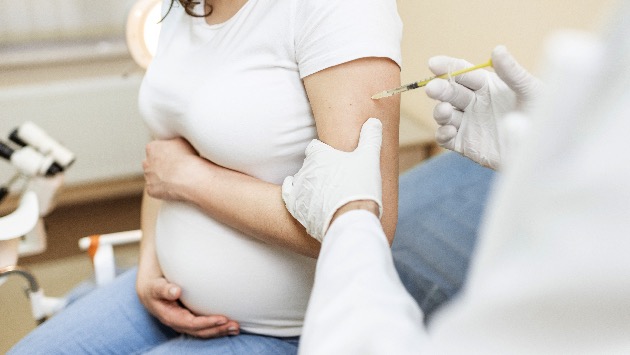 Dr. Rodulfo found out that she was expecting her second child during the height of the pandemic. As it did for so many pregnant women, the raging virus sparked an avalanche of additional anxiety within Rodulfo.

“This year has changed my life completely,” she told ABC News’ Erielle Reshef. “At the same time, of course, I was pregnant and I wanted to be careful and protect myself and not catch the disease.”

As she continued to work on the front lines, Rodulfo also feared for her mother, a 57-year-old who had been on dialysis. In June 2020, she received the news she had dreaded: her mom had tested positive for the virus.

“She called me and told me she was positive,” she said. “I became really concerned. My mom had end-stage renal disease and she had liver disease and diabetes, so I knew that this could be pretty bad.”

Rodulfo’s mother knew she was pregnant, and Rodulfo tried using that to inspire strength in her.

“I was trying to give her hope or give her something to hold on to so she could fight through,” Rodulfo said. “But it became clear that she was just getting sicker and sicker.”

She watched as her mother’s condition deteriorated quickly. Soon, Rodulfo found herself in the same position as she’d been with many of her own patients, standing at her mother’s bedside in her final moments.

“She was admitted and then passed away four days later in the ICU,” Rodulfo said. “I was the physician who pronounced her.”

After months grieving the loss of her mother and the deaths of her patients, Rodulfo found a ray of hope. In December 2020, the Food and Drug Administration issued its first emergency use authorization for Pfizer’s COVID-19 vaccine. Rodulfo was 31 weeks pregnant when she was given the first dose of the vaccine that month.

“I basically was excited and happy and felt a sense of relief to get this vaccine,” Rodulfo said. “It was a bittersweet moment for me as well, because I was thinking about my mother. If she would have made it through, she would have gotten the vaccine and she would still be here.”

Amid the vaccine rollout, misinformation about the vaccine and pregnancy have spread online, fueling skepticism among some pregnant women.

Yet, there is no evidence that the COVID-19 vaccines might cause any problems for a mother or her child, according to Dr. Laura Riley, chief OB-GYN at New York-Presbyterian Hospital and Weill Cornell Medicine.

“We also can say that now well over 40,000 pregnant women have been vaccinated and we have not seen any safety signals in these women,” she told ABC News in mid-March.

However, pregnant women were excluded from the early ‘randomized’ clinical trials considered the gold standard in medical research. Those studies in pregnant women are ongoing now, with results expected in the coming months.

While Riley said she understands that patients might want to wait for more data before getting vaccinated, the danger of contracting COVID-19 while pregnant is still present and real.

“The problem with waiting and seeing is that you increase the risk that you’re going to get COVID-19 while you’re waiting,” Riley said. “Pregnant women are at greater risk for severe outcomes due to COVID-19, and that means more likely to need an ICU stay, more likely to need mechanical ventilation and also an increased risk of death.”

And since the first vaccines were authorized in December, many thousands of women have opted for the shot. And these months of experience with these vaccines has given leading experts confidence that they are safe for pregnant women and those planning to become pregnant.

“We stand by our recommendation that pregnant women and those seeking to become pregnant should be vaccinated,” the American Society for Reproductive Medicine said in a statement.

Last week, a new study published in the American Journal of Obstetrics and Gynecology found Pfizer and Moderna’s COVID-19 vaccines generated a greater immune response with measurable levels of antibodies in pregnant and lactating women, that were also found in umbilical cord blood and in breast milk. In the group, 84 women were pregnant, 31 were lactating and 16 were not pregnant.

In February, Pfizer began clinical trials of its vaccine with 4,000 pregnant women in 44 study locations across the U.S. Participants will receive doses between the fifth and eighth month of their pregnancy and will be studied for seven to 10 months, even after they give birth.

Ginger Bennett, an Idaho mother of four, volunteered to participate in the Pfizer trial. She spoke exclusively to ABC News before her second shot.

“To my knowledge, I am the first pregnant woman in the state of Idaho doing this test,” she told Reshef. “I figure, if I can show or tell something to these other women that are wondering, ‘Hey, what’s going on for me,’ then I want to show that to them.”

Bennett is due in April with a baby girl, and she won’t know if she received a placebo or the actual vaccine until then. She hopes that sharing her experience with the trial will help assuage some fears for other pregnant women, she said.

“I’m glad I get to be a part of this, because in my case, I know there are other women out there in my place and maybe they’re worried or maybe they just have questions,” Bennett said. “Seeing this, hopefully they’ll say, ‘Hey, she’s doing OK or she’s not worried about it, maybe I shouldn’t be worried about it, either.’”

While recent polls show vaccine hesitancy has declined overall as more doses are administered, Rodulfo said it was important to her to share her story for other Latinx women to see.

“There is a lot of hesitancy and misinformation also floating around, so I was just trying to set an example for women and for Hispanic women in particular who are at higher risk,” she said.

In January, Rodulfo gave birth to a healthy baby boy named Benny. She’s since found out he has COVID-19 antibodies as a result of her vaccine.

“I am just just grateful that he was able to get these antibodies and that once I go back to work and he has to go to daycare, he has that extra protection,” she said. “So I’m very, very happy and very grateful that I made this decision.”

For the mom of two, getting the shot was about more than protecting herself and her family.

“My mother was a very caring individual and she always took care of herself and wanted to protect others. So, I know she would have been on board with getting the vaccine,” Rodulfo said. “In this way, I felt like I was honoring her.”

“I think given how serious COVID-19 could be in pregnancy and the fact that we’re getting more and more safety data, I say get vaccinated,” she said. “Protect yourself and protect your baby.”