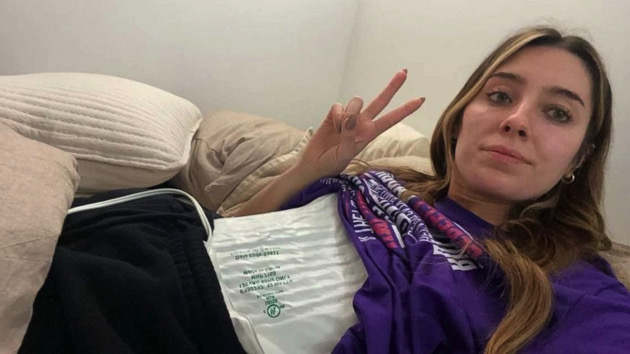 Taylor Keefe was 13 years old when she first saw a gynecologist.

“Every time I was on my period, I had no functionality. I would be bent over in pain for days at a time, screaming and crying,” said Keefe, now a 26-year-old clinical mental health counselor in New Jersey. “After two years of missing school and not being myself, my parents were concerned so I went to a gynecologist.”

It wasn’t until seven years later — after many more doctor visits, pain medications and various hormonal treatments — that Keefe was diagnosed with endometriosis, a disease where the tissue forming the inner lining of the uterus is found outside of the uterus such as within the fallopian tubes, ovaries, bladder and intestines.

Lesions from endometriosis can cycle monthly with the hormonal environment of the menstrual cycle and cause severe pain, infertility, and other associated symptoms in any of the affected organs such as painful urination, bowel movements, nausea, vomiting or bloating.

Following surgery at age 21, she was found to have more than 20 endometriosis implants in various organs. Keefe recalls the first thing her surgeon told her parents was, “She’s not crazy.”

“The disease itself and dealing with it has been invalidating for years because doctors invalidate it, friends and family invalidate it,” said Keefe, who said she felt validated for the first time with her diagnosis.

Endometriosis affects 1 in 10 women of reproductive age in the United States, according to the American College of Obstetricians and Gynecologists (ACOG). However, many women go undiagnosed for years due to such a broad range of symptoms and limited awareness of the disease, experts say.

“There is a lack of awareness. Women are usually treated for everything other than endometriosis when they present,” Dr. Tamer Seckin, an endometriosis surgeon in New York and co-founder of The Endometriosis Foundation of America, a nonprofit organization focused on increasing endometriosis awareness and research, told “Good Morning America.” “They get the runaround and get diverted to other specialties whether for bladder symptoms or IBS.”

Endometriosis often begins as small, scattered lesions on the inner lining of the abdominal cavity, known as “peritoneal endometriosis,” according to Seckin. These lesions can be very small in increments of millimeters and not show up on imaging tests such as ultrasounds.

“When [physician] don’t find anything, it’s easy to think the pain is in patient’s head and that’s really the crux of the problem,” Seckin said.

Endometriosis is most commonly diagnosed in women in their 30s and 40s, according to ACOG, however, it can affect adolescents as well.

Celebrities like Lena Dunham and Amy Schumer have previously publicly shared their own journeys with endometriosis and eventual hysterectomy, spotlighting the ultimate treatment for the disease for many women.

“Because I had to work so hard to have my pain acknowledged, there was no time to feel fear or grief to say goodbye,” Dunham wrote about getting a hysterectomy at age 31 in a 2018 article for Vogue. “I made a choice that never was a choice for me, yet mourning feels like a luxury I don’t have.”

Removal of the uterus, tubes and ovaries is considered the most definitive and “last resort” treatment for endometriosis, according to ACOG.

Because one can no longer bear children after a hysterectomy, it is often a difficult decision for women who have endometriosis. Removal of the ovaries also means surgically-induced menopause and this carries other health implications and consequences from low estrogen.

Therefore, many women choose to manage their symptoms with medications or fertility-sparing surgeries, where endometriosis lesions are removed, but uterus and ovaries are left behind.

However, as many as 8 in 10 women have pain again within two years after fertility-sparing surgeries, according to ACOG, because all of the endometriosis tissue was not removed.

Hysterectomy is also not necessarily a cure for endometriosis, as the disease often may have spread beyond the reproductive organs. About 10% of women return with endometriosis symptoms and 4% need additional surgery following a hysterectomy with removal of ovaries, according to a study published in Fertility and Sterility.

Non-surgical management options for endometriosis include use of birth control pills and other hormonal medications used to ease periods and pain symptoms.

“I think it’s important to recognize management versus treatment,” said Seckin, adding that while birth control pills and hormonal medications may help manage symptoms, “They don’t treat the endometriosis. The lesions don’t clear. They stay there. Treatment is removing the tissue.”

Following her first surgery at age 21, Keefe underwent two more surgeries within five years for progressive disease. All of her surgeries have been excision surgeries where endometriosis lesions were removed, and her reproductive organs preserved.

She said while a hysterectomy may be in her future at some point, she hopes to experience motherhood first, saying, “Becoming a mom has been a dream my whole life.”

Keefe, who experienced a pregnancy loss last year, said she is aware of the effect endometriosis may have on her fertility. She froze her eggs at age 23, at the advice of her doctors, in case she needs them in the future to get pregnant.

“To get a positive pregnancy test was one of the happiest days of my life. I never thought I would see that,” said Keefe, adding that after her pregnancy loss, she fears pregnancy “might never be a possibility.” “This might be the pattern every single time as a result of the scar tissue and all the damage from endometriosis.”

An estimated 4 in 10 women with infertility have endometriosis, according to ACOG.

The search for a better diagnosis

Diagnosis of endometriosis is currently made by laparoscopy, a procedure where a surgeon directly inspects the organs inside of the pelvis using a camera to look for endometriosis lesions and collects biopsy samples for diagnosis.

“Definitive diagnosis requires laparoscopic surgery which many women do not really want to undergo and I think that contributes to long delays in diagnosis,” said Dr. Christine Metz, professor at the Feinstein Institutes for Medical Research.

The need for laparoscopic confirmation of lesions for diagnosis of endometriosis is a topic of debate among experts due to the costs and inherent risks of surgery.

Researchers from the Feinstein Institutes for Medical Research, led by Metz and her colleague, Dr. Peter Gregersen, are working to develop a less invasive method to diagnose endometriosis through the use of menstrual blood samples.

According to the researchers, menstrual blood samples collected from patients with known endometriosis have distinct cellular profiles and inflammatory markers compared to samples from healthy women.

Metz said she hopes that, based on the current evidence, menstrual blood samples can be used as a screening tool prior to patients having to undergo laparoscopy for diagnosis.

“If you see that the patient has markers that are indicative of endometriosis, they would be recommended to go for the surgical definitive diagnosis,” she said.

Researchers hope this could help prevent delays in diagnosis by identifying and encouraging the subset of patients who may need laparoscopy.

While scientists continue to look for new ways to improve the diagnosis and management of endometriosis, there remain many unknowns and still no cure for endometriosis.

“There is a lack of funding, support and lack of research in this area considering that 10% of women have or experience endometriosis,” said Metz.

Seckin noted that the social stigma around periods and taboos surrounding women’s health issues contribute to the lack of awareness of endometriosis. He said he encourages his patients to speak up about their endometriosis to raise awareness.

Keefe said she has found empowerment in speaking about her endometriosis battle.

“It’s the most defeating of experiences in a lot of ways,” she said. “At the same time, we’re only going to be able to get through it if we lean on each other and we’re stronger together.”

Esra Demirel, M.D., an OB-GYN resident physician at Northwell Health, is a contributor to the ABC News Medical Unit.