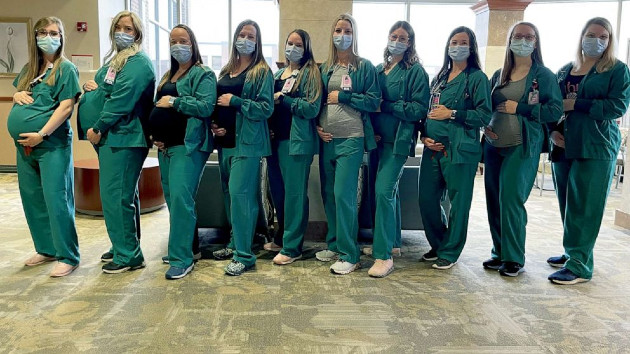 (LIBERTY, Mo.) — At one Missouri hospital, it’s going to be quite a baby bonanza soon.

Ten nurses and one doctor at Liberty Hospital in Liberty, Missouri, are pregnant at the same time. And, in case you were wondering, none of it was planned and nothing’s in the water.

“There’s a lot of nurses saying they won’t drink the water,” Hannah Miller, 29, told ABC News’ Good Morning America. “One of the nurses actually brought her own water bottle the other night and I was joking with her. I was like, ‘Oh, you’re really not drinking the water,"” the postpartum nurse, who’s expecting her first child, added.

Dr. Anna Gorman of Northland Obstetrics and Gynecology is expecting her second child and said it wasn’t likely that all 11 of them would be pregnant together.

“I think it’s really unique because it’s all in the same unit … and especially like our population ratio, I think is quite high. So sure it happens, but it’s pretty exciting when it’s this big,” the OB-GYN said.

Most of the pregnant staff are nurses with Liberty Hospital’s Birthing Center and said they hope to deliver there when the time comes. They’ve also bonded over their shared experience so far.

“This is definitely a great experience and it’s something that I feel like we’ll probably bond over for a lifetime, having the babies due around the same time,” Alex Atcheson, a labor and delivery nurse, told GMA. “It’s been great to have each other for support and go through pregnancy together.”

The 29-year-old is expecting her third child, along with her colleague, labor and delivery nurse Alison Harrell.

“Alex and I figured out pretty early that we were due the same day,” the 30-year-old said. “And then we started making a list of everyone and people just kept adding to the list as time went on.”

Atcheson and Harrell are 37 weeks along and will welcome their little ones in the next two weeks, with both sharing the same due date of May 27. Their labor and delivery co-worker Katie Bestgen is due in a little over two months, on July 20.

“I was one of the last ones to tell everybody that I was pregnant,” she said.

The labor and delivery nurse is expecting her first child and said, “I think it was just more exciting to add to the group and have everybody right there with me.”

In addition to delighting in each other’s happy news, the nurses and co-workers have been sharing their own experiences as well.

“It’s been really helpful. Just like getting advice and tips from my coworkers and especially the ones that have had babies before and just relating and like, ‘Oh, do you have problems with your hips too, or different pains or that kind of thing?"” Cheyenne Beaty said.

For the 26-year-old labor and delivery nurse expecting her first child, she’s appreciated having a built-in support group at work.

“It’s just nice that there’s people around me going through the same thing for sure,” she said.

Therese Byrum, 27, said lately, there have been at least two pregnant staffers working together during a shift and they’ve also had instances where everyone was pregnant during a shift. The obstetric float nurse who rotates between labor and delivery, the NICU, and in postpartum, will be one of the last staffers to give birth. The mom of three is expecting her fourth child on Thanksgiving Day.