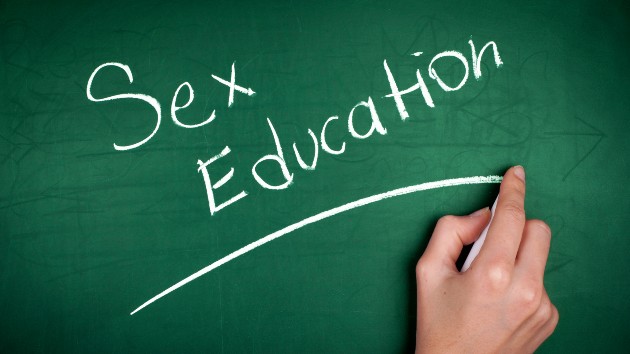 (NEW YORK) — When Gabby Rodriguez was in high school in Texas, she said the only sexual education she received was about abstinence and referred to sex between a male and a female only.

Four years later, as a senior in college, Rodriguez identifies as bisexual and says she often thinks about how her high school sex education affected her life many years later.

“I think for me, not having sex education and not knowing that it’s okay to explore, really hindered me in knowing who I was,” Rodriguez, 23, told ABC News’ Good Morning America. “I was so scared to be who I was.”

Rodriguez is now part of a growing movement of people working to evolve how children are taught sex education in schools to make it more inclusive and affirming.

“Once I found myself, I found that I had a voice and it was pretty important, the things that I needed to say,” she said. “And I realized I wasn’t alone, that there were a lot more people with me who didn’t have the education.”

Only seven states and the District of Columbia have state laws or some kind of regulatory guidance requiring sex education be provided to students that is specifically inclusive of LGBTQ+ youth, according to a report released ahead of Pride Month by a coalition of 10 policy and health organizations, including Planned Parenthood and the Human Rights Campaign.

Fewer than 8% of LGBTQ+ students have ever received LGBTQ+-inclusive sex education in school, and for LGBTQ youth who are Black, Indigenous and other people of color, inclusive sex education is even less accessible, according to the report, “A Call to Action: LGBTQ+ Youth Need Inclusive Sex Education,” which analyzed hundreds of sex-education studies.

There are also six states that require only negative information be provided on homosexuality in sex education, according to the Guttmacher Institute, a reproductive health and rights research organization.

“Many of us have grown up in an environment where we have never been able to be our true selves,” said Preston Mitchum, policy director at Unite for Reproductive and Gender Equity (URGE) and a co-author of the “A Call to Action” report. “For me in particular, growing up as a Black queer boy in poor neighborhoods, I wasn’t talked to about any of this.”

Mitchum said he has observed how many of his peers, including himself, came out well after graduating from high school, saying, “The lack of community that many of us were afraid to build out of fear still disheartens me to this day.”

To be more inclusive, Mitchum notes that sex education needs to include depictions of LGBTQ+ people, not rooted in stereotypes and caricatures, use gender-neutral or expansive language — like they, them and partner — and cover everything from healthy relationships to sexual assault prevention.

She said much of her work is focused on educating educators about the purpose of sex education as well as what it means to teach it in an inclusive way.

“People think that when we talk about sex education we’re talking about the parts that are covered up by a bathing suit and also pregnancy,” said McBride. “Sex education is like a life skills course at this point. It’s so much more than just anatomy and how to prevent an unintended pregnancy.”

“In the past, what wasn’t prioritized was making sure that things were inclusive for our LGBTQ+ students in all of this because all we talked about was preventing pregnancy and STIs,” she said. “It’s important to understand that LGBTQ+ students can also get pregnant and get STIs and they also have a right to this information like every other student in the classroom.”

“That is what I’m working towards when I say inclusive sex education. I want it to be affirming. We want our educators to be able to provide a space where all of our students feel seen and reflected,” McBride said. “They’re getting the information they actually need versus what is being served as the status quo.”

The key to an inclusive curriculum, according to McBride, is making the topics of gender and sexuality differences more than just a single lesson.

“It’s not just, ‘Okay, today is going to be the day when we have LGBTQ+ class,"” she said. “These are essential skills that need to be integrated in everything that we’re doing.”

“Instead of saying boyfriend and girlfriend, say partner. Remove gender binary pronouns from the curriculum when you’re using examples. Look to include examples of families of all types throughout the entire curriculum,” McBride continued. “It’s about integrating these changes into every single delivery of every class as opposed to having a one-day. This is the day to check off this box.”

The push for change

Across the country, 39 states and the District of Columbia mandate sex education and/or HIV education. Nearly 30 states require that abstinence be stressed in sex education classes, and 19 states require instruction on the importance of engaging in sexual activity only within marriage to be provided, according to the Guttmacher Institute.

The type of sex education that is funded federally can swing with each presidential administration from abstinence-focused, or sexual risk avoidance — teaching students only to avoid sex to avoid unwanted pregnancy and sexually transmitted infections (STIs) — to comprehensive sex education that includes evidence-based information about contraception as well as abstinence.

Advocates of inclusive sex education are pushing for Congress to pass the Real Education and Access for Healthy Youth Act (REAHYA), which was introduced in May and would require the Department of Health and Human Services (HHS) to award grants for comprehensive sex education. The bill also mandates instruction that is “Inclusive of young people with varying gender identities, gender expressions, and sexual orientations,” according to Sen. Cory Booker (D-NJ).

Advocates point to data they say shows that accurate and inclusive sex education is important for students’ mental and physical health.

Youth ages 15 to 24 account for almost half of new sexually transmitted infections in the United States, according to the Centers for Disease Control and Prevention (CDC). The teen pregnancy rate in the U.S. has been continually falling, but remains “substantially higher than in other western industrialized nations,” according to the CDC.

When it comes to mental health, LGBTQ+ youth seriously contemplate suicide at almost three times the rate of heterosexual youth and are almost five times as likely to have attempted suicide compared to heterosexual youth, according to the Trevor Project, a national organization that provides crisis intervention services to LGBTQ+ youth.

“I see people in my DMs who are like, ‘[My school] didn’t teach us anything,” said Dr. Jennifer Lincoln, an Oregon-based OBGYN who has gone viral for answering sex education questions on social media. “That’s unfortunate that they feel they have to go online and not [learn it] in a curriculum.”

“When kids are not getting information or not feeling welcomed at school, they have way worse outcomes,” she said.