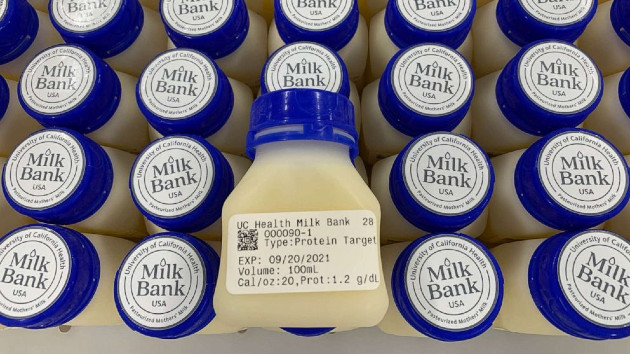 (NEW YORK) — As the baby formula shortage continues to impact parents and children across the country, there is renewed interest in donor breast milk, or donor human milk, with some considering it as another option in addition to formula.

The Human Milk Banking Association of North America said it has seen an “unprecedented” number of calls to its member milk banks from people inquiring about donor milk, especially in Texas, Illinois and California.

“In the height of this formula shortage crisis, we are absolutely seeing a surge in demand and inquiries from families who are stressed and wondering if donor milk is a safe option for them to explore,” Lindsay Groff, the organization’s executive director, told ABC News’ Good Morning America.

“I suspect as this goes on, that demand will only continue to rise as people are desperate to find safe alternatives for their babies,” Groff said.

The Human Milk Banking Association is an umbrella organization with 28 member milk banks in the U.S. The group comprises a number of community and nonprofit milk banks affiliated with hospitals, including the University of California Health Milk Bank.

Dr. Lisa Stellwagen, a newborn specialist and the executive director of the UC Health Milk Bank, said the center had seen an uptick in calls, especially in May.

“We’ve had an outpouring of milk donors, of women who want to donate milk to help other people,” Stellwagen said Monday, adding that orders, meanwhile, had risen “another 10-20%” in the past week alone.

There are various reasons why a parent or caregiver may consider donor milk. Oftentimes, it is a necessity for premature babies in the neonatal intensive care unit who may be too sick to breastfeed or whose parent may be sick themselves or otherwise unable to provide breast milk.

“Breast milk really does have the ideal nutritional components for a baby,” Dr. Alexa Mieses Malchuk, an assistant professor of family medicine at the UNC School of Medicine and a family physician, told Good Morning America. “High protein, high fat, all of the nutrition that a baby could possibly need is contained within breast milk.”

Breast milk also contains “very helpful antibodies that the lactating person will pass on into their milk that can help protect babies from different illnesses,” Malchuk said.

“And there are also things like lower incidence of allergies, lower rates of obesity,” she added.

Parents and caregivers should consult their baby’s pediatrician or health care provider before changing a child’s diet in any way or adding donor milk into their feeding schedule.

Donor milk at milk banks is often reserved for premature babies, NICU patients and what the UC Health Milk Bank refers to as “the most fragile newborns.”

“We always prioritize the most medically fragile infants and that will never change,” Groff said.

Families with children who are in the NICU or hospitalized can ask doctors and health care providers to see if it may be available through the hospital directly.

“Milk donors are screened, the milk is often pasteurized, you can be sure and confident that it’s been stored properly. So that is the absolute safest way to get donor breast milk,” Malchuk said.

“I think a lot of people have this misconception that … it’s not safe, that it could transmit infection and that the processing takes out all the good stuff, which is not true,” Stellwagen added. “We think of it like blood. It has nutrients but it also has all this biology and in that biology, are cells and viruses and bacteria. So once we accept the milk from an approved donor, then we actually analyze it for nutrients. We put milk from multiple mothers together, and then we put it in bottles and we cap it, and then we heat pasteurize it.”

If bacteria does survive the pasteurization process, which is very uncommon, all of the milk is discarded, according to Stellwagen.

“So it has these rigorous steps of making sure that it’s nutritionally good for the baby, that it’s pasteurized, that there’s no bacteria in there,” she said.

Donor milk can also go to other babies and children who may need it at home.

“Anytime a baby needs breast milk and the parent who would normally be the one who’s lactating is unable to do so, I say go ahead and look into donor breast milk,” Malchuk said.

Hospitals and nonprofit milk banks have rules and processes in place to ensure babies receive safe and nutritious donor breast milk. Like with any bodily fluid, there are safety risks to consider when it comes to donor milk, and parents and caregivers need to be aware of and understand the risks.

Risks can include contaminants, infectious diseases, drugs, and if not processed and stored properly, donor breast milk can become dangerous to consume.

There is currently no federal regulation for donor breast milk. Democratic U.S. Reps. Rosa DeLauro of Connecticut and Kim Schrier of Washington introduced the Donor Milk Safety Act in April, which would require the Food and Drug Administration to establish safety standards for human milk. It is currently awaiting action in the Energy and Commerce Committee.

Some have sought to obtain donor milk through for-profit milk banks and informal channels, such as family members, friends, communities and parenting groups. However, experts say people should be extremely cautious when exploring unregulated options and have repeatedly warned against it.

The FDA has explicitly recommended against feeding infants human milk that has been “acquired directly from individuals or through the Internet,” and strongly suggests consulting a healthcare provider before feeding a baby milk from a source other than the mother, as there are possible serious safety risks if the milk is not adequately screened.

Breast milk acquired from an individual or online source may have been exposed to infectious diseases, and may be contaminated with illegal drugs or prescription drugs. Also, if human milk is not handled and stored properly it could become unsafe to drink.

“The American Academy of Pediatrics is pretty firm about not recommending informal milk sharing,” said Stellwagen, who also serves as policy chair for the AAP’s section on breastfeeding. “You want a milk bank that is operating with strict, rigorous controls for safety and quality.”

As a starting point, Malchuk suggests families and caregivers ask trusted sources for recommendations and check guidance from the Centers for Disease Control and Prevention on breastfeeding, prescription medications and vaccinations, as well as resources like the InfantRisk Center.

There are “no guarantees” when it comes to donor milk outside of an accredited milk bank or hospital, Malchuk added.

For lactating people who want to donate milk

“We are in another time of major demand and so we are asking healthy lactating people to step up,” she said. “If we can increase the amount of donors that are screened, and that can donate their milk, then we can move beyond the need of the medically fragile and start to help more babies in the community.”

At the UC Health Milk Bank, Stellwagen said the process begins with the potential donor answering a questionnaire, as they would when donating blood.

“We are going to ask during our screening process a rigorous list of questions similar to when you donate blood, about your health and your lifestyle. Do you have any risk factors for blood-borne pathogens like HIV or hepatitis? Do you use any prescription medications? You’re not allowed to smoke tobacco, you’re not allowed to use cannabis products,” she said.

“A lot of medications are fine, things like insulin … but other medications may lead to a woman not being able to donate.”

The milk bank then contacts the donor’s physician to ensure there are “no concerns” and that “prenatal labs were fine,” according to Stellwagen. “And then we send [the prospective donor] for a blood test that we pay for, and we check again for blood-borne pathogens, HIV, hepatitis, that sort of thing.”

If they pass that step, Stellwagen said, they can donate.

“The average donation is about 600 ounces of milk,” she added.

At the end of the day, Malchuk said the decision to go with donor milk will vary with each family.

“Donor breast milk is a great alternative but again, it just depends on what sort of resources are available to you and what you feel is best for your family,” she said.